We as gamers deserve more B-movie style titles. That’s the most important thing I came away with after playing the twin-stick shooter Tesla vs Lovecraft. There’s just something about that campy type of game where you know everything about it is ludicrous, but you don’t care because it’s entertaining on such a primal level. Weapons, power-ups, and a variety of monsters, the developers at 10tons know what players want and more.

Let’s kick things off with the story. Mostly told during the intro of the game, the plot revolves around the famous Nikolai Tesla doing a presentation for his new invention which offers the ability to create limitless energy. During said presentation, however, the equally famous H.P. Lovecraft charges the stage and opposes Tesla’s idea, stating that he is “messing with powers he doesn’t understand!”. Shortly afterward Lovecraft is arrested and thus, the game begins. You, playing as Tesla, must then fight through hordes of monsters that have been summoned by Lovecraft to try and stop you. 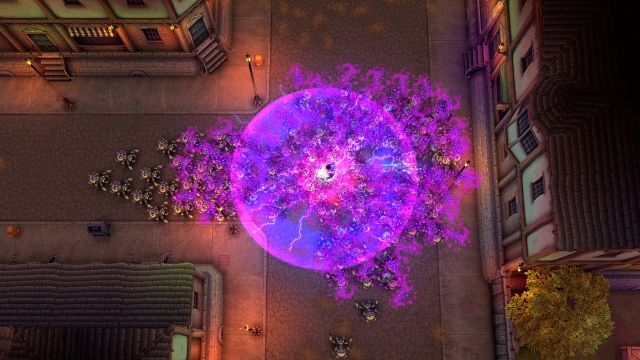 It should be noted that, despite having a single player campaign, Tesla vs Lovecraft is firmly set in the realm of co-op. There’s nothing that says you can’t play the story on single player, but the game's just made for friends. This is a title where you come home from the pub with your buddies and you want to play something that is simple yet extremely entertaining (sort of like watching a Die Hard marathon).

That being said, this is a title I’m going to recommend so let me get the negatives out of the way early. The only real criticism I have towards the game is that it’s way too long. The entertainment value is definitely there, don’t get me wrong, but Tesla vs Lovecraft is a bit of a slog to get through. I understand that, in theory, the massive amount of levels means more bang for your buck, but after a while everything just seems to blend together. It gets to a point where you need to step back and do something else for a bit. Also, and this is more of a minor thing, but you don’t get to play as Lovecraft which is kind of a shame ‘cause I was hoping for a mini-game where you could write great atmospheric stories with terrible dialogue.

Going back to the positives though, there is a great sense of variety to be found in Tesla vs Lovecraft. From the abilities to the level design, there’s a lot to take in and enjoy. The maps are wide open and easy to navigate, there’s a nice challenge structure as you complete each level, and the different colours throughout really help bring the world to life and make it pop. All in all, this is a game that certainly was lovingly crafted from start to finish. The last thing I want to mention about Tesla vs Lovecraft is its sense of achievement. This isn’t something I usually discuss as achievements in games can, more or less, be marked down in regards to numerous things. Whether it’s reaching the end of the game, beating it in its entirety, or just appreciating the journey for what it was, each game measures achievements differently. With that in mind, the sense of achievement in this title is something that works wonderfully. Sure, the game may have a bit of a length issue, but it’s all those battles leading up to the final boss that makes the victory all the more satisfying.

So, all that taken into account, is Tesla vs Lovecraft worth the price of admission? Absolutely. If you want a dumb, fun, mind-numbing action game, then this is the one for you. The concept, although silly, is wonderfully executed through the design, the flow, and the overall variety that the game has to offer. Don’t let the title fool you, this is a gem that should not be missed.

Tesla vs Lovecraft (Reviewed on Xbox One)

Tesla vs Lovecraft is a B-Movie style twin-stick shooter that hits all the right notes. Although a bit on the lengthy side, this title is worth every minute.