The Coma 2: The Vicious Sisters Review

Since summer is over, the nights are getting colder and we are coming into autumn. Which means Halloween is near, so my mind turns to playing some creepy games. Now to be totally honest, I am kind of a chicken, especially when things jump out at me. So most of the time with scary games, my goal isn’t necessarily to beat the game, but to see how long I can play before I totally chicken out. Last year I played Layers of Fear on the PlayStation4 and I really enjoyed it, so much so, I actually completed the game. Though to be fair, there weren’t many jump scares so I was more just creeped out than really scared.

This year I am looking at Coma 2: The Vicious Sisters, developed by Devespresso Games. This game is a sequel to a game called The Coma: Cutting Class, luckily you don’t need to play the first game to enjoy this one, as I have never heard of or played the original. The game is a 2D, horror survival game, featuring hand-illustrated manhwa (Korean manga). You take on the role of Mina, a student attending Sewha Highschool. In the introduction we learn that Mina’s best friend, Yonghuo, fell into a mysterious coma three weeks ago. You join Mina before her english class with Ms. Song starts. The game will show you some little tutorials so you learn how the controls work, while you work through some teenage drama between Mina and her friends before class starts. The english class ends at 10:00PM, and we find out that Ms. Song kept Mina late to go over her test mark. This is when all the weird stuff starts happening. Seho one of your classmates is standing in the hallway staring at the door to the janitor's closet. He suddenly disappears, so you go into the closet, thinking he is in there. Instead, you find a weird shrine and a book that speaks of the final blood moon and how the Vicious Sisters will come and walk our world. After reading this, Mina states that she doesn’t feel so good and seemingly falls into a mysterious coma. “The Coma” is actually a whole other realm, and the only time it is in sync with the real world is during the last blood moon. When you first start exploring this other realm, you will find that most of the doors for the rooms are locked until you find a card key in the area to give you access, so you will have to do some searching first to get into these rooms. A lot of the stairs are blocked off with weird tentacle-like vines forcing you to find a new route to take. Mina has no real way of defending herself, all she can do is run and try to avoid the hanging clawing bodies slashing at her. Some familiar people from the other realm show up, like your english teacher Ms. Song. Though instead of being nice and helpful, she is trying to annihilate you. So the only thing you can really do is run and hide from Ms. Song. To stay hidden, and keep Mina’s breathing quiet, you will have to do some quick time events. If you fail to complete it, chances are she will find where you are hiding, and once again, shocker, do a quick time event to keep away from her. If you fail, she will kill you. It will take time to learn the map well enough to find where you can hide, and finding the areas that allow you to access the whole buildings. I died a lot in the beginning, the first time it was scary when she popped out and was chasing me, but after a while, it got quite frustrating. If you pay attention to the audio, you will hear her heels when she is coming down the hallway, so you know it’s time to hide, or stay in the room until she is gone. Though I recommend wearing headphones, this makes it a lot easier to figure out which direction she is coming from. If you come across mace in the vending machine, grab some, this will give you a couple seconds to get away from Dark Song when she catches you, which will be a lot from my experience. This game requires a lot of quick thinking and planning! This is not your usual horror game where you are blasting at tons of zombies with the weapons you find. The weapons and some of the items in Coma 2 require you to do some crafting. At the police station you will have to find the grip, and lithium magazine. Once you have the required pieces, you have to go to the crafting table and do some quicktime button combos to assemble the taser. The taser will get added to your bag, to be used at a special time, it’s not something you get to carry and use whenever you want. I found this frustrating, as there were many times I could have used that taser. 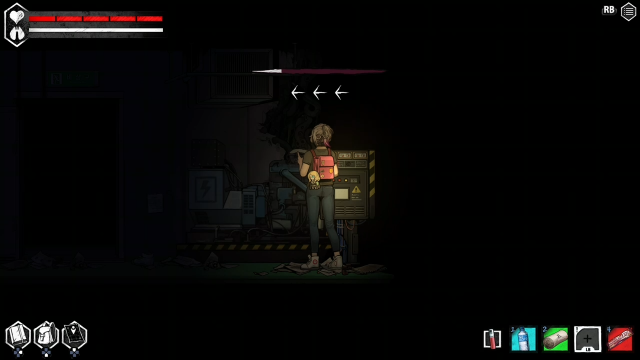 If you are looking for a horror game that looks beautiful, and is different than your usual type, this may be worth checking out. Dark Song chasing you was super scary, but I found that constantly having to backtrack to get stuff for fetch missions, or to just do simple things like just unlock doors, was frustrating. I wish that Mina was able to fight back more, like kick or even get creative and grab something off the table to smash the enemy. It was frustrating to have to just run and hide all the time, I think playing more and getting better at recognising good places to hide will help a lot. The story in Coma 2: Vicious Sisters is interesting and I would love to find out what happens, so I will keep playing to find out if Mina ever gets out of the coma, maybe in time for Halloween.

The Coma 2: Vicious Sisters (Reviewed on Xbox One)

This is a creepy horror game with an intriguing story that requires a lot of quick thinking and planning to avoid enemies and survive. Coma 2 is definitely not your usual run-and-gun survival type game!