I have always been a fan of historical fiction, especially of works that add interesting spins to the events of the past. The Council, an episodic, narrative-focused game from French developer Big Bad Wolf, has exactly what I crave. Set in the late 18th century, The Council follows one Louis De Richet on a quest to find his missing mother, Sarah. On this adventure, he must deal with a mysterious island and the secrets of its owner, one Lord Mortimer, and the various other guests staying there. As you explore the island and its looming manor, you can unravel each character’s motivations as well as find clues as to the truth of Sarah’s whereabouts. 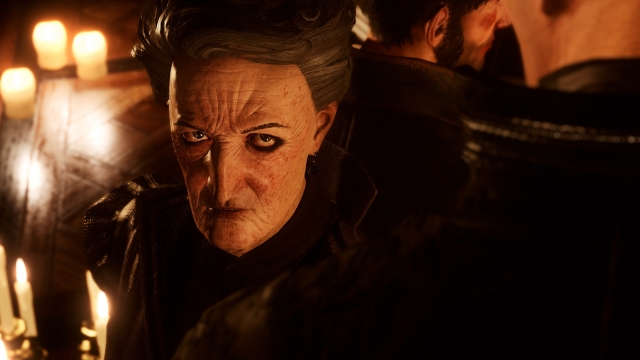 In the early game, these secrets stay mostly grounded in political intrigue. Some are more out there than others, but still well within the realm of possibility. But as the story unfolds and the early mysteries meet their resolutions, events build into the fantastical. Alongside this turn comes a slight tendency to tell more than show, but on the whole, the game does a magnificent job of keeping the storyline and its mysteries equal parts engaging and well-supported.

Alongside a tight narrative, the game also creates a great, almost foreboding tone. While careful plotting is a large part of this, another major factor is the impeccable soundtrack. An uneasy piano backed with ominous strings plays over most of the game’s events and in nearly every explorable room. Each track plays right into and supports the tone of the scene, almost as though Lord Mortimer has commissioned a small orchestra to follow Louis on his journey. Sometimes I just left the game on in the pause menu or in the library, just to listen over and over again. 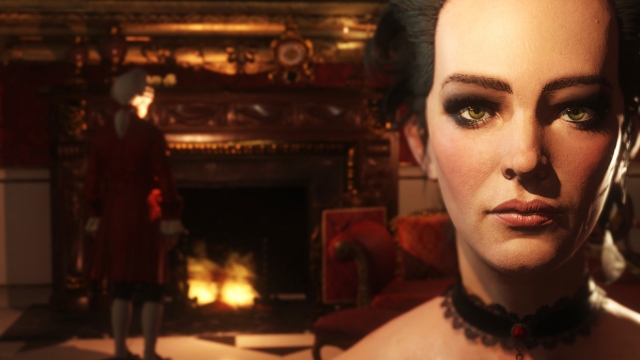 Of course, given the isolated island setting, The Council lives and dies by the strength of its characters. And boy, does it live. Each guest is thoroughly thought out and displayed. Nearly every character has several motivations important to them and their own opinions on each other. This proves to be very important in this game of manipulation. Most of the guests also have some sort of innocuous character trait that doesn’t really play a major role in the story but still manages to make that character feel more alive and present. This is especially nice, considering that many of the people are actual historical figures. Assigning fictional idiosyncrasies - such as painting George Washington as a bumbling gossip, helps to solidify them as people, beyond what we may have learned in our history courses.

Then there are the performances. Every major role is performed adequately, with many even impressing me by the end. In particular, Louis De Richet, played by Nathan Rippy, sounded oddly young and boisterous towards the game’s beginning. I had been expecting some sort of refined gentlemanly voice that seems to be common for European detectives. Nevertheless, I quickly grew used to Rippy’s voice and wound up enjoying it. His voice work proved to be an excellent fit for the role, which moved seamlessly across the spectrum of speculation, snark, manipulation, anger, and sorrow.

Of course, now that we’re talking about the characters, I would be remiss to avoid the wrinkled elephant in the room. If you've looked at any promotional material for this thing, you’ll know that the character models are something of an issue. As I’ve implied, they tend to fall between awfully striking and strikingly awful. There are a few characters that were a pleasure to watch, like Elizabeth Adams with her troubled grimace, unkempt hair, and remarkably neat clothing and Jacques Peru in all of his hulking, battle-scarred glory with piercing, haunted eyes.

But then there are the bad ones. Emily Hillsborrow doesn’t look too bad at first glance. Her facial expressions, while composed, have as much character behind them to match the elegant nature she exudes. No, the real problem with Hillsborrow is the ridiculous corset she wears. Whenever we get a close-up of the British noble, we are beset with kilometers of cleavage and nearly every full-body shot has me worrying that she is going to fall over or break her back. And don’t even get me started on Sir Gregory Holm, a visually-upsetting man that looks more like a shriveled, wrinkly prune that has been crushed in one hand and then dunked in powdered sugar than a refined British aristocrat. 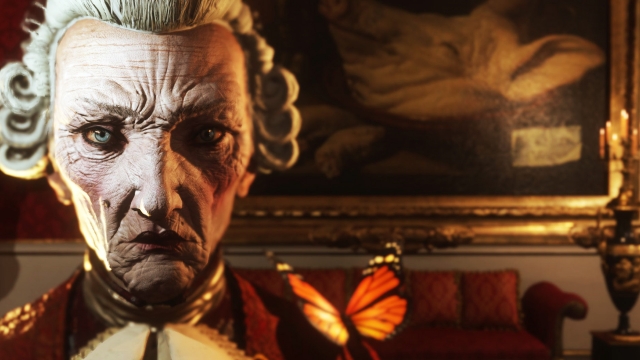 These models, as one of the main pieces of the game showcased on box covers and trailers, made up my entire negative impression of the game before I managed to actually start playing. I came back to The Council again and again whenever it went on sale, debating with myself whether or not the off-putting models were enough to offset the eye-catching premise.

Luckily, the rest of the game looks significantly better. The Council primarily takes place within a large mansion on a private island, with each wall decorated to the nines. Each room has its own unique feel. There’s the seemingly infinite darkness of bookshelves towering over bookshelves in the library. Then, the dining room, where half is a cozy, red-carpeted lounge complete with fireplace. The other side has a majestic table overlooking a stark, striking cliffside with a view of blue, rocky waters below. And that isn’t even getting into the guests’ personal rooms. Most are decently simple at first glance, having a larger living area with a smaller bedroom off to the side. And yet each room has personal bits of spice unique to each character.

Von Wöllner’s room, for instance, is absolutely infested with occult and alchemical symbols, with a desk dedicated to his craft. Repeatedly, his interest in such things proves to be the easiest avenue to manipulate him, even though he may possess even darker interests. Napoleon’s room, on the other hand, features his maps and weapons almost intentionally strewn about. His desk has been placed to be the first thing one sees upon entering the room, a huge portrait of himself prominently leaned right beside it.

Speaking of the paintings, darn. They are spectacular. Nearly every room has unique, beautifully-rendered and very real paintings, especially in the guests’ rooms. Each room has a sort of theme that the manor’s enigmatic owner, Lord Mortimer, seems to have picked out himself. The entrance hall has a wide assortment of godly visages and power-hungry fathers, featuring an immense statue of Zeus hanging above a roaring fireplace. In Manuel Godoy’s room, everywhere you look, you’ll see a new painting featuring a great betrayal (for instance, Judas’s whole biblical screw-up) or portraits featuring the people Godoy himself might be betraying. Each frame you get the chance to analyse is another piece of the puzzle that is your fellow guests’ personalities. Sadly though, staring at paintings won’t actually provide a direct gameplay benefit, merely a greater understanding of each given character. 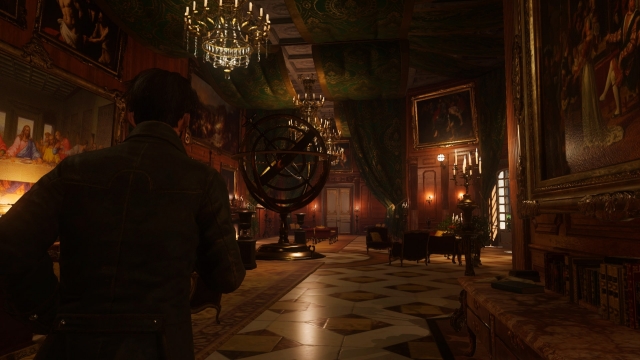 Still, you’ll want to explore each room, especially those of the other guests, from top to bottom. As a narrative-driven game, The Council depends upon its conversations, where you choose, among specific options, what to say and do around people. Each person is unique (save for the mask-wearing servants) and has their own personal immunities to avoid and vulnerabilities to exploit. Taking the time to look around your fellow guests’ room can be an invaluable source of information on how they, in particular, react to different types of dialogue.

Of course, beyond knowing how others will react, most dialogue choices (and choices made in the more exploration and puzzle-focused portions of the game) also depend on what skills you, the player, have cultivated. With abilities ranging from Manipulation to Agility to Linguistics, Louis De Richet has a lot at his disposal. Numbering 15 in total, each skill can be used throughout the game, though only when explicitly offered as an option. Each choice tied to a skill also has a difficulty level, informing the player how many Effort Points that skill use will consume, with the more difficult or out there options costing more. Louis starts off with only a few Effort Points, so you have to think carefully about when and how you use them. Although by the end, one can rack up a fair amount of the little, important diamonds.

Not to mention the fact that, by leveling up each of your skills, using them costs less and less. In this way, players can specialise in certain areas that they find interesting and never have to worry about expending Effort when it comes to, say, Subterfuges or Religion. Alternatively, if you’re feeling more up to careful management of Effort Points and the consumables that restore them, a jack-of-all-trades system can also work out quite well. 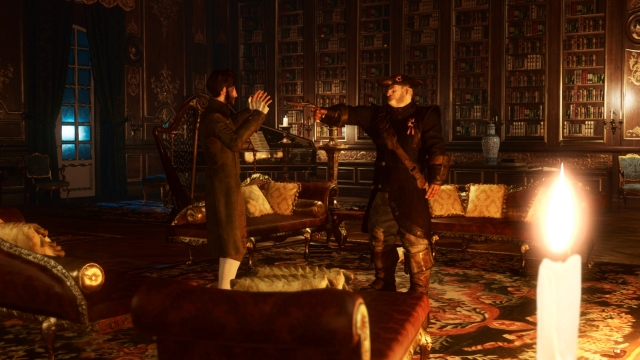 Furthermore, those consumables are another great reason to get invested in the exploratory segments of the game. Each and every room hides these valuable little tonics in locked boxes, behind desks, and on nightstands. Though you can only have five of each type on you at any time, they can still come in handy. From making seemingly impossible tasks simple as can be to restoring Effort Points, each consumable proves to be an invaluable aid in both conversation and exploration.

Speaking of which, exploring The Council’s elegant manor and intricate puzzles is a load of fun. There’s always something interesting to look at or for Louis to muse over. Furthermore, the puzzles are nicely integrated into the environment. Most of these puzzles tend to follow the classic point-and-click formulas of “pick up everything not nailed to the ground before figuring out where and how to use those things,” and that formula still works. There are plenty of “ah-ha” moments where you figure out how to either unlock or circumvent a door or decipher hidden messages left by Louis’s missing mother. Additionally, as the game progresses, The Council proves to possess its own style of puzzles, asking the player to analyze the manor’s many paintings as well as biblical texts to reach conclusions. Of course, puzzles that can only be solved by priests and art connoisseurs would leave us with a terribly niche game, so Louis is able to bring in the aid of his leveled skills to make sense of everything.

Overall though, while The Council’s character models are far from excellent and its narrative loses some of its steam and intrigue in the game’s later portions, this heavily political fantasy is a gloriously entertaining ride. Complete with well-thought-out puzzles, a gorgeous soundtrack, and stunning architecture, this is a true diamond in the rough.

The Council (Reviewed on PlayStation 4)

While it certainly isn't a feast for the eyes, The Council exceeds expectations in all other regards, delivering a thoroughly enjoyable and occasionally thought-provoking experience.

Really enjoyed the desciption of the music.

Thank you, anon! It's much appreciated!