When I first saw The Crow’s Eye I was going in blind. Like many indie teams that develop first-person, atmospheric horror titles built using the Unity Engine, they’re usually relegated to being a cheaply produced, jump-scare athon with little to no depth. So, in total honesty, my expectations weren’t high. However, The Crow’s Eye is different, and despite knowing that it was a horror and puzzle title, I had expected something closer to Amnesia. What I played was something closer to a slice of Portal with the world building atmosphere of Bioshock.

The story is shrouded in mystery and is one that requires you to investigate the disappearance of students from the Medical University of Crowswood. You awaken in a room, confused with no recollection of how you got there. It’s 1966, and twenty years have passed since the incident that left the university in desolation, but everything isn’t as it appears. The place is rigged with mechanical devices, puzzles, and a dark secret hidden within.

From the get go, I felt instantly familiar with your standard first person controls: you can sprint, crouch and interact with objects in the environment. Pretty standard stuff and the key is the interaction with objects, which comes into play heavily later. Equipped with a lighter I scratched away at the mystery by collecting the numerous notes, letters, and documents that lay around the empty ruined classrooms. Audio tapes are also scattered which delve deeper into the reasons why you’re here and the possible fate of those who explored before. Then comes the atrocious voice of the processor running the show, struck with insanity. His voice made me cringe, with an over-the-top Joker like performance, but nonetheless, throughout he becomes your guide, leading you through his twisted experiment. 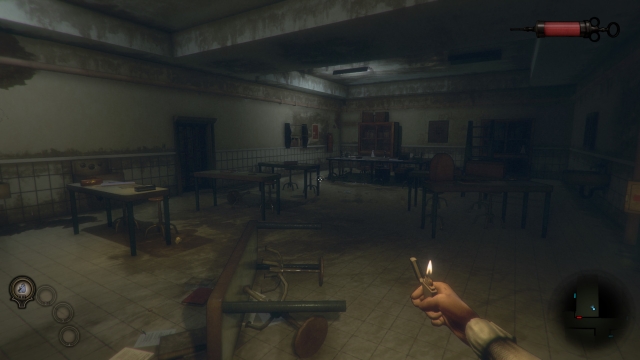 Unlike the clear influences of Bioshock and Amnesia, The Crow’s Eye is first and foremost a puzzle title. You start you off with simple tasks like getting through obstacles, like stacking boxes or having to crawl through vents to clear a path to a blocked door. Further exploring, I noticed that there is a health bar; my thoughts were that it was clear that something or someone would attack or hunt me, a typical horror trope for a title such as this. I couldn’t be more wrong. There are a few moments you can be jumped by a creature of the unknown, but these are few and far between, and the real danger is from poor or misjudged jumps you’ll encounter throughout the platform puzzles.

It’s the 3D platforming sections that show the real creativity of The Crow’s Eye and again, these vary from simplistic to more complex tasks, which cause more frustration than reward. For a medical university, the place certainly has its fair share of mechanical platforms that move back and forth above a body of water. Most of the tasks will have you navigate such platforms to either get to the other side, collect an item or activate some form of switch. Simple enough, but it’s the tools provided that make The Crow’s Eye, unlike other horror puzzle titles. Using the power of magnetism, you’ll collect a device that provides you with the ability to attract and repel yourself through different platforms. You can also use the device to move crates.

Aside from platforming and exploring, you’ve also got an inventory and crafting system. After collecting specific items you craft a few items like bandages and few other story based items, but some are dragged out leading you to be errand boy and collect multiple items. Nothing wrong with the design choice as it’s a simple addition that pads out the gameplay. 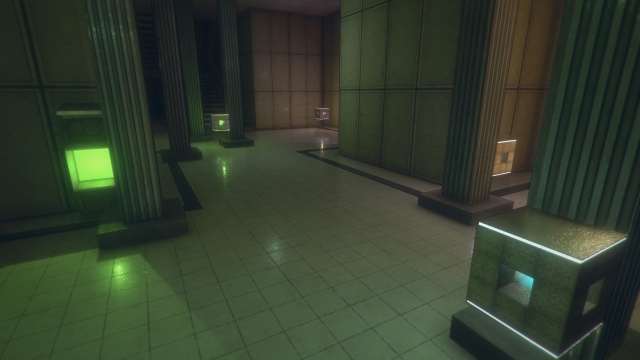 Each new area of the university has the intercom voice of the professor, once more booming his lunacy with more dialogue of your potential demise. The voice acting isn’t terrible but is very forced and out of place. Fortunately, the rest of the voice acting found on the audio tapes is excellent and offered a lot of intrigue and insight into what happened to the university back in 1947.

The Crow’s Eye is an enjoyable title, but its downfall is in the main gameplay design. Being a 3D platformer, it would help if the platforming actually works. It isn’t necessarily broken but can be frustrating having to consistently backtrack and attempt leaps and jumps multiple times. Not a buzzkill, but certainly bothered me to the point where I had to stop playing because of some tedious jump I kept missing. It also didn’t help that the game doesn’t feature any quick-save and has you rely upon save points; which appear as fortune teller machines which are very out of place.

Graphically The Crow’s Eye is no technical feat: the visuals aren’t anything spectacular and despite having a wide selection of graphical options it isn’t entirely well optimised. Nonetheless, it doesn’t detract from the overall experience. Like many other Unity-based titles, The Crow’s Eye does contain a lot of repeated textures, rooms and assets. Fortunately, The Crow’s Eye still shows it has its own identity, unlike other Unity horror titles, that could be mistaken for one another. 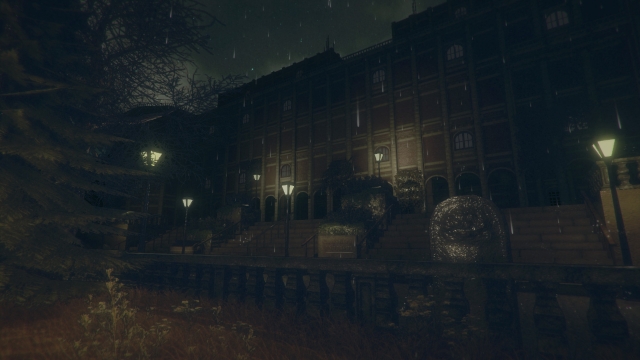 The Crow’s Eye is excellent platform puzzler with an intriguing story. I can’t consider it being an actual horror title, especially as a psychological terror that the developers, 3D2 Entertainment describes, but as an atmospheric first-person adventure, it has a lot going for it. It can be easily recommended for fans of puzzle-adventure titles shrouded in mystery.

The Crow's Eye (Reviewed on Windows)

The Crow’s Eye is excellent platform puzzler with an intriguing story. I can’t consider it being an actual horror title, especially as a psychological terror that the developers, 3D2 Entertainment describes, but as an atmospheric first-person adventure, it has a lot going for it. It can be easily recommended for fans of puzzle-adventure titles shrouded in mystery.