When Tom Clancy’s The Division originally released back in 2016, it was met with mixed reception and comparisons to Bungie’s Destiny released two years prior. Was it an action shooter or was it an RPG? Well, it was both. You had your shooting and looting within a sprawling world shared between other players. While praised for its visuals using the then-new Snowdrop Engine, and an impressively detailed rendition of a wintry Manhattan, it was not without its faults. Enemies were bullet sponges, mission variety was simplistic and the gameplay loop either wasn’t very rewarding or became a grind. It took Ubisoft and developers Massive Entertainment time to course correct and over the years, the live service that it is, the game eventually became a great experience.

These days though, like most new IPs, it doesn’t always hit the nail on the head or crack code till the sequel. So here we are, three years later, The Division is back and set in a new state in an emergency, against a bigger threat along with a lot more loot. It’s Tom Clancy’s The Division 2. 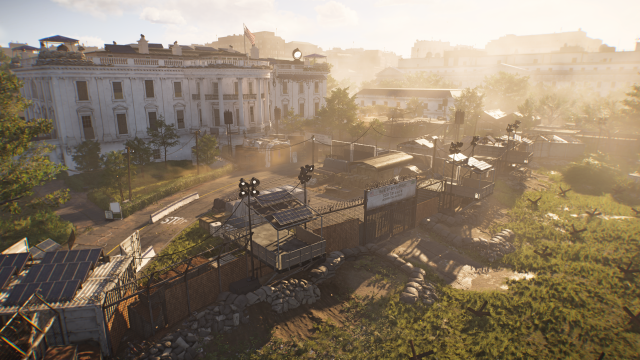 Taking place six months after the aftermath of the smallpox epidemic that ravaged Manhattan, you return as a member of the Strategic Homeland Division (SHD) to help bring governmental order back to the country. Now in the United States capital of Washington D.C., the threat is not only the containment of the virus but the opposing factions that have risen from the aftermath who either want to seize territorial control or burn what’s left. No longer is it survival in the concrete jungle, it’s now a fight to protect the capital.

At the heart, it’s a third-person, cover-based shooter against a barrage of enemies ranging from red grunts to gold elites, but it’s the quality changes that put it above others from launch. Thrown in headfirst, you’re tasked with defending the White House from attack. It is here where you’ll be introduced to your base of operations and your new home. Much in the same vein as the first, your goal is to bring the division network online across the city. In order to do so, you have a bevy of missions, projects and objectives to complete. Fortunately, and a lesson learned from previously, it isn’t an arduous task. From the very get-go, you’re sent through a story more focused on the rebuilding of life for the people. Although, this is not to say you’re the errand boy or girl, no, you’re seen as the saviour, protector and even sheriff of the city. As you progress you’ll visit settlements as well as given missions to fight off opposing factions and defend the people.

The further you delve and explore everything ties together building towards rewards and projects, which ultimately rebuilds the settlements offering; new side-missions, bounties, equipment, and gameplay facilities. Outside of this, you’re free to roam discovering encounters and take further control by seizing Control Points located around the city. With four opposing factions: True Sons, Hyenas, Outcasts and Black Tusk, the encounters are mini-tasks which sees you stopping enemy broadcasts, rescuing hostages or stopping convoys. The Control Points are beefier and tougher, these occupied areas see you fighting and defending key areas, which upon claiming become new reward hubs and fast-travel zones. Now, it’s all well and good talking about what you can do, but The Division 2 is, after all, a looter shooter and you can’t have that without knowing the gameplay. Starting with health and armour which has been reworked. Instead of relying on health, you now have armour. It’s a minor change but is greater in the long run. When armour is broken, health is exposed and you can easily be taken down, but even in this state, you’re given ample time to move to back off and replenish using armour packs. It makes a difference, but this doesn’t make things any easier, as newer types of enemies like the brutes are clad in body armour, which needs to broken before hitting with death-dealing blows. They’re tough, but named enemies can be tougher, these are bosses and are also part of bounties who put up a fight, with hefty amounts of armour and health.

When it comes to combat, no longer does firing back feel like you’re throwing peas at sponges. You’ve still got the same standard set of weapons ranging from ARs, LMGs, submachine guns, shotguns and pistols, and veterans will see some returning favourites. Saying that, the only criticism would be the lack of full auto rifles, some of which seen in the first becoming now semi-fired battle rifles. Nonetheless, you’ll find a weapon to suit any playstyle.

As for gear, you can equip body armour, backpacks, gloves, knee pads, masks and holsters. Each offering increase protection to health, skill power and overall armour. All the gear and weapons range from white worn up to gold high-end. When reaching endgame you’ll start pushing to find exotic weapons and gear sets both offering higher traits and bonuses. Upon reaching the max level of 30, gear score reigns and when you get to this point, your attention will be on creating the best build to suit your playstyle, whether going aggressively, focusing on skill power or straight-up tanking.

This adds together alongside your skills and the newest addition: specialist classes. Alongside the first Division skills: seeker mine, turret, ballistic shield and pulse you now have an assault drone, chem launcher, hive and firefly. These skills can work either defensively or aggressively. Want to focus on healing? The drone, hive or chem launcher can provide. Going in for the attack and defence? Seeker mines can destroy, turrets and drones can cause distraction attacks or you can push on the enemy with a shield. While you’re limited to two skills at any one time, you can customise and upgrade using found SHD tech, so there is nothing stopping you from switching out between skills and experimenting.

Specialist classes are different and are unlocked at level 30. Only one can be equipped, but again can be switched out. Each comes with a unique weapon and you can choose between survivalist with an explosive crossbow, demolitionist with the grenade launcher and sharpshooter with its 50 cal. sniper rifle. Not only does a specialist class provide a powerful weapon but you’ll also gain access to an additional set of skills which boost your traits ranging from increased weapon damage to providing boosts to yourself and teammates.

Last and of course not least, the loot which is in abundance and one thing that can be praised in its design. Enemies drop it, you’re rewarded it and it's also found in boxes and caches. Eventually, you’ll find so much that you risk becoming a hoarder or even the sense of gear fear on whether to sell it or dismantle it for parts. Both are advised, as you’ll need cash to purchase new potential gear to dismantling for parts. Parts later become integral as it’s used for crafting and upgrading your bench as well as re-calibrating gear to increase the gear score and modify traits and stats. All of this builds to the real meat of The Division 2, the endgame. This sees you taking over Strongholds and going through the world tiers. No doubt, this is where the game really shines. Storm highly defended bases and take out the opposing factions, as you progress you’ll also be able to increase the challenge by completing not only Strongholds but also story missions on harder difficulties to earn more rewards. Beyond this and if you’re looking for more of a challenge Dark Zone can’t be missed, now with three areas to explore each more versatile offering close-quarter combat and large open areas, you can explore the zones, take on PvE encounters, or go rogue and hunt other players in PvP combat. Just be warned: don’t trust anyone, especially when you’re standing your ground for item extraction. If you’re looking for something entirely PvP focused, then there is also a competent multiplayer mode called Conflict which will scratch the that competitive itch.

Visually, the Snowdrop Engine is a technical feat. The drab and dreary snow-covered streets of Manhattan has been replaced by Division 2’s rendition Washington D.C. It’s beautiful, with larger open areas with of lushes of green and an impressive array of lighting all around whether it’s during the day, night or during the occasional storm. More so, there’s much more variety in its design, alongside a story spanning across the city. Real-world buildings such as the Grand Washington Hotel, the American History and Air & Space Museums, the Capitol Building, and the Washington Monument and Lincoln Memorial all standout, but even just wandering the streets to take it all in will have you reaching for the photo mode for a sightseeing tour.

Overall The Division 2 is a vast improvement over its predecessor straight from launch. With improvements in every area of design, whether you’re playing solo, with friends or through matchmaking there is a wealth of content to keep you occupied. While the story itself isn’t anything exciting and can be rather clichéd, the real battle for Washington D.C. begins at the endgame. With the addition of Daily Rewards, Challenges and Global Events.

Right now, The Division 2 is definitely worth the asking price and will certainly keep you coming back, but even if you wait there will be even more content to play in the coming years.

The Division 2 is a vast improvement over its predecessor straight from launch. With improvements in every area of design, whether you’re playing solo, with friends there is a wealth of content to keep you occupied. Right now, it's definitely worth the asking price and will certainly keep you coming back, but even if you wait there will be even more content to play in the coming years.