The Escapists sees you taking on the task of escaping from various prisons, using the guile and cunning of your pixelated character. From mugging the police of their uniforms and digging your way out of the fence to, erm, well - that’s a bit of a point. How else can you escape from a prison?

Which leads to a sore point of The Escapists. The somewhat linear tutorial teaches you a few things, such as how to craft a Sock Mace, equipping an outfit and using a shovel, yes, but it all disappears after that, throwing you into the first prison without much to assist you on the way. A few guiding hints in the first level - maybe even just giving you the ideas of how else you could escape would have been enough to get me going. Instead, I spent eight in-game days wandering, fulfilling some tasks and beating ten shades of hell out of anyone that crossed me, or didn't; because I wanted to see what loot they had. 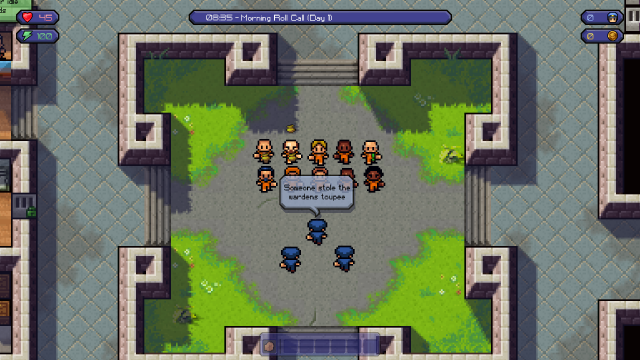 Morning roll call, day one. Haven't mugged anyone yet.

I’d stockpiled duct tape, sheets of foil, circuit boards amongst other various tat, but I had no real idea what to do with any of it. Things were popped into the crafting area at random to see what I might have been able to do, but I just couldn’t seem to find any of the right combinations. Confused, and slightly irritated at seemingly having wasted time pumping pixel iron in the gym building up my characters stats, I did something I haven’t done since picking up Minecraft back in mid-2009 during its beta phases - looking up a guide or wiki or someone else’s experience on what I’m supposed to be doing. As a newcomer to the game, this was a little bit frustrating to be so early into the game without much idea of what to do. After picking up some of the basic things I could make and do, the game instantly became much more enjoyable and I swiftly made my way out of the prison to freedom! But, I didn’t want to goto the next level; I wanted to go back, play it again now knowing what to do, I wanted to explore more of what the ‘daily prison life‘ gave me. I’d somewhat glossed over any benefits going to the gym had given me - but realised I had more health and was doing more damage in fights than I had previously. Having buffed up substantially, and “LOLing at Cats” enough to get my intellect stat increased, I set up to just go around knocking out inmates and officers, looting more items and learning what I could craft. It was during this episode that I discovered another stat, “Opinion”. Essentially, I’d amounted to painting a target on my back and nearly every inmate started a fight with me on sight. Oops!

I’d found a key on a now conveniently unconscious guard and thought; “Great, I should get out of here pretty quick with this!” - so off I went looking for the locks it could open. I’d taken no more than a few steps when the bell went for evening roll call, and the stolen key was traced back to me - something punishable by time in solitary confinement. This has the knock on effect of decreasing your statistics, so it’s something you want to avoid if you plan on staying top dog. 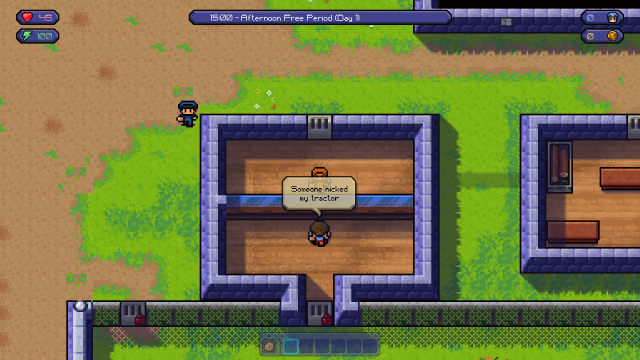 Better call in the CSI then.

From my “what-the-hell-do-I-do” research, it’s clear the UI has received considerable polish from the PC version, but there’s an issue with the pixel fonts where in places it doesn’t line up properly and you end up with some of the text looking blurry or with thicker lines down one side of the letters, however, I imagine that this is probably a technical casualty rather than an inherent problem with the game itself. Sounds, too, have received upgrades and are much better than their PC counterpart, having a decidedly arcade 8-bit feel to them, which adds to the charm.

For those looking for a game to make you think, then there’s more than enough to keep you going in The Escapists and much more than I’ve noted here - but I don’t want to spoil it all for you, that would be no fun. You can always retry different techniques to see if you can beat the amount of days (or police officers) you need to escape a prison, or just to try out a different tactic that may give a better result. However, don’t expect to be guided by the hand when getting started. Oh, and clear any arrangements you might have had coming up as it gets rather addictive once you’ve got the basics down.

Now, to bash that wall with a plastic fork some more...

The Escapists (Reviewed on Xbox One)

The Escapists is a "deeper than appears" puzzler that will take some getting into, but the pay-off is worth it.

Jingle Cells Coming to The Escapists

The Escapists Heading To PlayStation 4 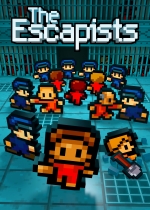