Returning for its fourth game compilation, the box that talks is back with five new games. This time around, there’s even a new twist on an old classic. Since the Jackbox games are fairly well known, I’ll only quickly cover how it works before breaking down each game individually. You see, unlike normal games on Xbox, the player only uses the controller to select the game and navigate the menus between games or on pause screens.To actually play the games, players must sign in to a website by entering a room code and alias. Once this is complete and all the players have joined, the game will begin and will be played through prompts on whichever devices were used to sign in.

Because of this, any and all Jackbox games can be played by anyone with access to a smartphone, tablet, or laptop with internet capabilities. The benefit of this is far reaching as not only does it mean more types of people can be engaged, but more people can play each game since the standard eight controller limit is lifted. Finally, the increased player pool allows these games to have tons of people playing the same gamemode or participating in the audience. Before I begin talking about the games, I would like to mention that all of the ones featured in Jackbox Party Pack 4 allow an audience to judge and even participate in a few of the games. 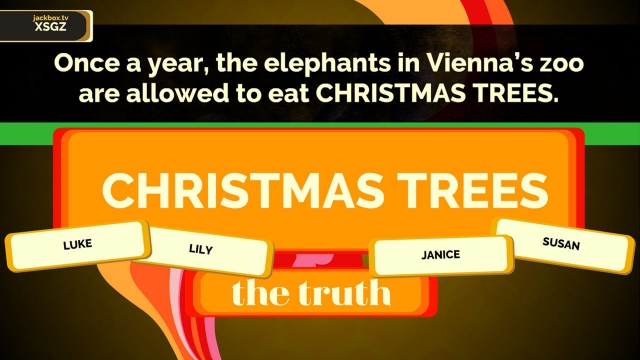 With all that said, let’s talk about the first game, Fibbage 3. In this third entry to the strange trivia series, two to eight players are tasked with coming up with believable answers to absurd questions. The goal is to trick the other players into picking your answer while you pick the correct answer. The added twist in Party Pack 4 is the addition of Fibbage: Enough About You, a new way to play Fibbage that is based all around weird facts about each of the players involved. This fan favorite game is just as good as it has always been and the added twist is very appreciated. 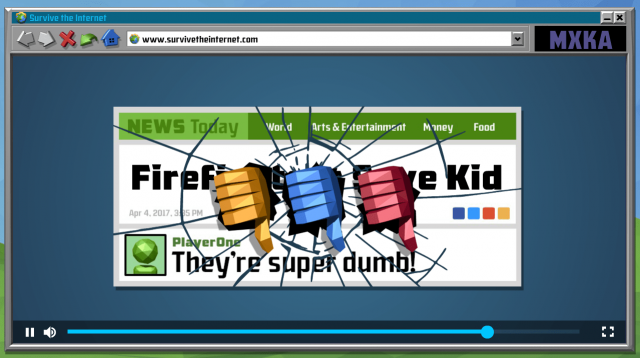 The first fully new game in the list is Survive the Internet. Three to eight players are given various prompts to answer, only to have their answers taken out of context as comments on article titles made by other players. This may sound a bit confusing at first, but it’s actually really interesting and creates very unique situations. Gaining points in this game is a bit convoluted, but honestly, the mode is fun enough to forget about who wins and loses just to have a good time. This is probably my second favorite new game on the entire Party Pack. 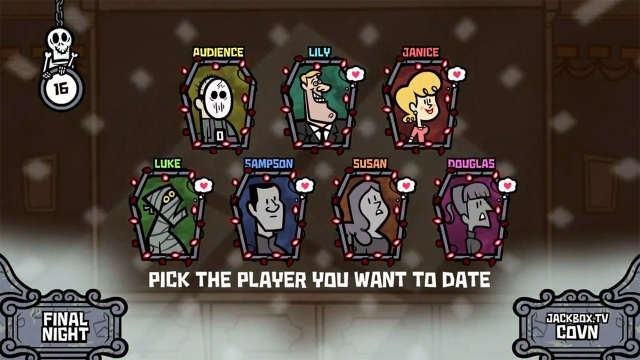 My least favorite game has to be Monster Seeking Monster, which is a real shame because the concept behind this one seems fairly interesting. Three to seven players take control of various monsters each with their own secret monster powers. These powers seem to all focus around earning more points in one way or another. The actual gameplay involves sending messages to other players in an attempt to get a date for the night. My issue with this game is simple: any smart player will always try to date the losing players, pushing themselves and the losing player up the scoreboard. I mean, if the player in second place dates the player in first, it only pushes them both up without changing anything. Basically, it doesn’t make a lot of sense not to take nearly the same strategy every game. 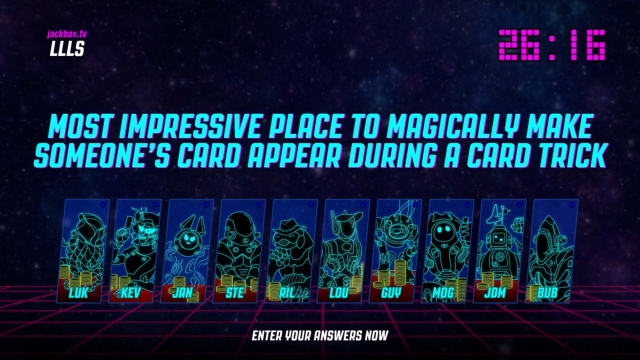 From least liked to most favorite, the fourth game is called Bracketeering. While every game in this list supports the audience participation, this is the only one that sports a massive player pool of three to sixteen players. To play the game, each player is given a prompt to answer that is pitted against another player’s answer within a large bracket of absurd arguments. To add to the fun, players can bet on which answers will win in upcoming matchups. Winning these bets can make a huge difference in score later on. I like this game mostly due to how much freedom it gives the players and how clever answers will usually do better in the long run. 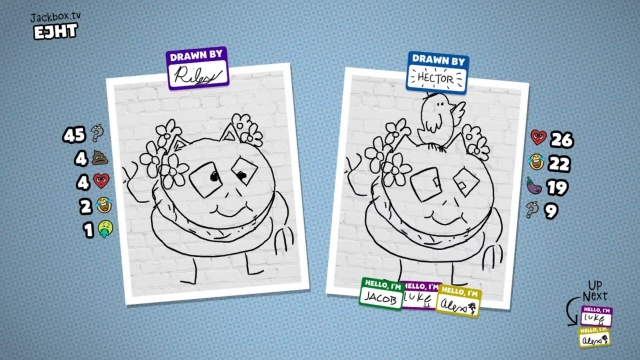 Finally, to round out the collection, we’ve got Civic Doodle, a game all about drawing for three to eight players. A few players are given the same starting doodle and are told to add to the drawing in whatever way they see fit. Players that aren’t currently participating (and audience members) can rate the developing ‘masterpieces’ with various symbols. The twist is that once time is up, everyone votes on which additions to keep. This process repeats several times until a final mural has been completed. While this game isn’t quite as much fun as Drawful or Tee K.O. in my opinion, it still makes a decent addition to the Party Pack.

Before I wrap up, I would like to mention a few technical issues I ran into during my time with this title. I’m not completely sure if it’s only in the one game, but I did notice that my Windows Phone (I know, I know) kept crashing out of the browser while I was playing Monster Seeking Monster. Unfortunately, I couldn’t figure out exactly what caused it, but I did notice that sending messages to other players seemed to play a large part in the crashes. Other than that, I also found it rather difficult to complete games of Bracketeering after it was plagued by a number of soft locks that would stop the game cold. Again, I could not figure out exactly what caused the lockups, but they were persistent and left a bad taste in my mouth.

If these glitches and freezes could be ironed out, this title would be far better off. Nothing ruins a fun game night like the game locking up and forcing everyone to start over. As for what I think of the actual content, I would say that I rather enjoyed each game for one reason or another. It is too bad that a couple fall a little flat, but the addition of Enough About You and the uniqueness of Survive the Internet and Bracketeering make this Party Pack one to have the next time you’ve got company over.

The Jackbox Party Pack 4 (Reviewed on Xbox One)

Sporting everything from a new and improved Fibbage to brand new games with new ways to play, it is actually rather impressive that each of these Party Packs continue to feature such fun games. Barring a few technical issues, I only saw minor issues in any of the games and would gladly recommend them all to friends looking for a way to entertain guests.