From the blurb, The Low Road sounds like one of the most interesting, unique, and fun adventure games to come out in years. Unfortunately, it doesn’t really follow through on those promises. What you get with this 1970s espionage-themed point-and-click comedy is an enjoyable enough few hours of strong writing and beautiful presentation, but it’s ultimately marred by narrative missteps, and drab, stock-standard adventure game inventory puzzles.

Set in the 1970s, The Low Road puts players in the shoes of Noomi Kovacs, a fresh graduate from the academy who wants nothing more than to get out into the field and become the world’s greatest spy. Unfortunately, she’s a rookie confined to a boring desk job. And yet, ironically, this first act, in which the player is meant to empathise with Noomi’s frustration by carrying out a “routine” phone scam is the most enjoyable and engaging part of the whole four or so hours. Sifting through information to scam Noomi’s mark feels like real espionage work. It’s reminiscent of games like Papers, Please, turning what should be mundane paperwork into an entertaining experience. It’s actually what follows that mostly feels like a chore. 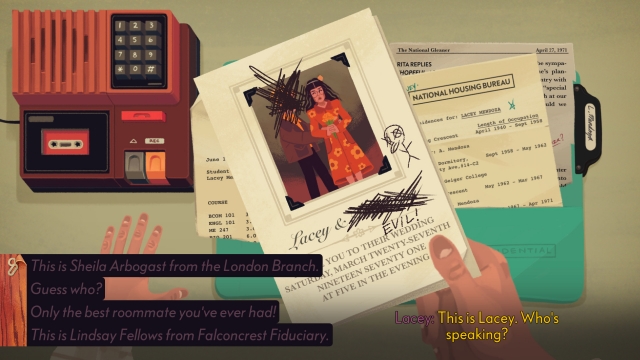 The story follows Noomi’s attempt to get out into the field and then complete her first assignment, with the former fundamentally involving a series of typical point-and-click adventure puzzles. Talk to this character. Find out how to get rid of them. Find the relevant inventory item. Use relevant inventory item on object in the environment. Repeat. Thankfully her first assignment has a little more variety gameplay wise, featuring some espionage-themed mini-games like breaking open a sewer grate and cutting tapes to restore an audio recording. Despite all this, it still feels undercooked. These mini-games are relatively few-and-far between, outnumbered by those mundane inventory puzzles.

Credit where credit’s due: The idea of having players help Noomi break out of her bland desk job and get some field experience is an interesting one and a brave narrative choice. It’s just not executed well in terms of gameplay, and not following Noomi any further past her first assignment means that a lot of the promise of espionage remains undelivered. Sure, technically speaking, pick-pocketing a colleague’s swipe card is espionage, but it’s not as fun as bluffing your way into a cult (which you do in the single assignment that fills out the second half of the game). It’s still a fun story, and a unique approach to the typical “spy thriller” narrative, but it just could have been so much more. Especially when the dialogue is genuinely laugh-out-loud funny at times and the characters are well-written, unique, and fleshed-out with interesting back stories. 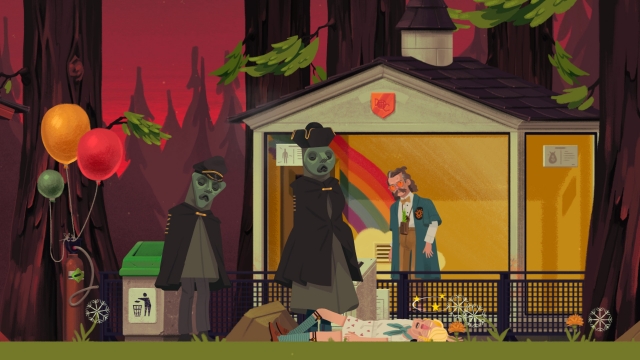 On the plus side, the game’s presentation is top notch. Firstly, the 1970s aesthetic is beautifully realised. The hand drawn art style and soft colour palette really make the period-accurate character designs, clothing, environments, and technology look and feel authentic. The psychedelic rock soundtrack feels like something lifted right off a rare The Doors b-side, rollicking along with the carefree attitude of the era’s music. Voice acting is mostly of a very high standard, in particular Noomi and her partner Turn, who become more likeable and relatable thanks to excellent performances from their respective actors. There are occasional issues with poor sound quality for some characters’ voices, but they aren’t egregious.

Ultimately, The Low Road can be summed up with the phrase “what could have been.” The wonderful art style and soundtrack, great writing, memorable characters, and occasional moments of engaging espionage-themed gameplay all demonstrate what a unique, fun title it could have ended up being. Unfortunately, this promise is drowned out by bland, repetitive adventure game puzzles and it all ends way too soon for a game worth roughly £15. Pick it up when it’s on sale.

The Low Road (Reviewed on Windows)

The Low Road shows a lot of promise, but it just doesn't live up to it.

Lie, Blackmail, and Steal Your Way Down The Low Road from July 26th

I thought the same as you did in the opening paragraph - it sounds fantastic on paper. Too bad it didn't fully live up to the promise.