It seems that the top-down view might be making a resurgence in gaming. Shark Punch’s The Masterplan will remind you of seminal top-down violence-a-thon Hotline Miami on first viewing, but the art style is probably the only thing connecting these two wildly different games. The Masterplan is characterised by a tone and setting most crime movie aficionados will find recognisable.

The game revolves around three acts of 70s-era point-and-click heists which require the player to sneak, beguile and sometimes blast their way through. There are no frantic run-and-gun battles that made games like Hotline Miami instant classics but that isn’t to Masterplan’s detriment. You won’t be able to fight your way through the game’s levels: guns and ammunition are pricey and rare. Most of the time the player will find themselves using it to intimidate rather than kill or maim. 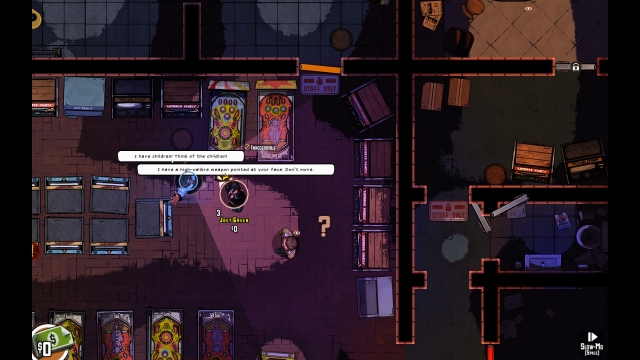 Controlling your heisters is done through use of the mouse – there’s no controller support – which can be used to command one or more of your characters, attack and defend. This time-tested method of RTS control can sometimes run the player into trouble, though, especially when multiple sequential actions are required. Masterplan isn’t a game for the faint of micromanaging heart, and characters who die will be gone permanently, while those that are left in the level will similarly never return.

Considering the game’s title I spent precious little time actually planning my heists. There’s no GTA V-style intel gathering and asset collection here – often the game will drop you straight into a heist with no real instructions on how to approach the mission other than to try to memorise guard patrol patterns and various other environmental triggers. Often a mistake results in a restart of the level in Masterplan: it’s not worth fighting the police if they’re alerted and triggering one or two alarms will usually mean that you’ll have to deal with more trouble than you can handle.

The top-down art style lends itself well to the setting. Although cartoony in nature, when paired up with The Masterplan’s excellent soundtrack it created an ambiance that really sets the game in its era. You feel like you’re leading a bunch of wise-cracking, cool-headed mobsters to pull the rug out of the establishment. When the game gets frantic and the bullets start flying the similarities between it and Hotline really come to the surface. Where the latter is pulsating and thrilling, though, Masterplan is plodding and methodical. I often found that before I had time to get my man to draw his gun and fire he’d already been riddled with a few spurts of buckshot from a patrolman’s shotgun. 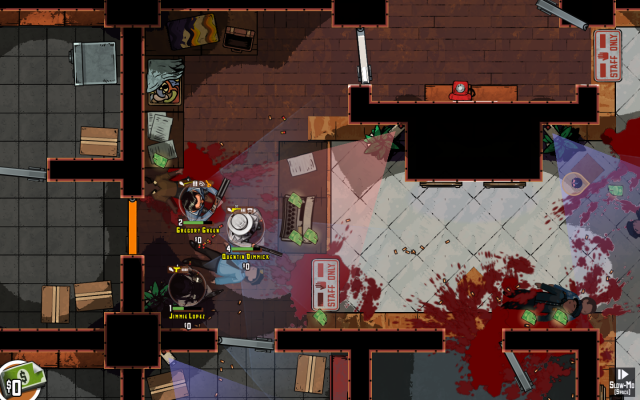 The threat of permadeath is often a mechanic that engenders a sense of trepidation in the player: ‘if I risk too much my favourite characters might die!’ Though any of my men could die at any time (and many did), I rarely really felt that they were much of a loss. This, combined with the fact that I spent much of my time restarting heists in frustration, negated the threat of permadeath.

Much like my Sid Meier’s Starships review, while I played Masterplan I could not help but feel that the game would be far better suited to an iPad or tablet. The controls suit the use of a touchscreen and the game would be perfect for the on-the-go gaming that tablet users crave.

As a title on PC only, though, the game lacks a certain polish and sheen that would really help it stand further out from other indie titles in the market. Though The Masterplan will appeal to some due to its tight mechanics, cool setting and unique style, I can’t help but look at it and think about what could have been with a few tweaks: a truly stand out indie title.

Even though The Masterplan will appeal to some due to its tight mechanics, cool setting and unique style, I can’t help but look at it and think about what could have been with a few tweaks: a truly stand out indie title.