There Came an Echo Review

Innovation in the videogame industry is seemingly becoming scarce as each year passes. Several AAA titles released recently have noticeably reiterated on the same tower-climbing, microtransactions, or lack of variety that the last were already criticized for. There Came an Echo, 2015’s latest Kickstarter-funded project from Iridium Studios, attempts to distance itself from such derivations by emphasizing an advanced voice-based command system with real-time strategy gameplay. While the concept of this system was not completely molded from the minds at Iridium Studios (the PlayStation 2’s troubled Lifeline comes to mind), the execution of the technology is superb and perhaps the best the industry has seen yet. In the end, this format of the game coincides well within its science fiction setting. However, this success comes at a cost.

You are cast in the role of Sam, an unseen protagonist tasked with providing voice commands to the characters. The narrative is launched with a focus on the character of Corrin (voiced by Wil Wheaton), a cryptographer who has developed an encryption algorithm that unravels a large amount of complications, from which brings his life into immediate jeopardy, forcing him to pursue an enigmatic mission with the mysterious caller named Val.

Every piece of dialogue in There Came an Echo is fully-voiced, and generally competent at that, with Wil Wheaton and Ashly Burch highlighting the cast. Even though each character’s voice actor’s performance is proficient, the personalities I cannot defend. With only some minor exceptions to two or three characters, the written portrayals in There Came an Echo are often incoherent in regards to the apparent motivations. Nearly every character was unnecessarily cretinous towards each other, almost without reason. In turn, this unsatisfying representation of There Came an Echo’s array of characters corrupts the very story it’s trying tell. Its tale of conspiracy and question of faith was interesting through the game’s entirety, but the characters came across more as interruptions rather than aids to the narrative.

Despite There Came an Echo’s focus on story, the unique gameplay is where its main draw derives from. The game is played with a headset, and it’s specifically designed for a headset, to command the on-screen characters in a real-time strategy format. On the positive side, the voice technology actually works with little error; just be sure to talk at a normal volume, as speaking too loud or soft will result with the game’s equivalent of “say it again.” Just say the character’s name followed by a command (Attack, Hold, Switch Weapon, etc), and the action will execute immediately. A useful feature that I thought was worth mentioning is the “mark” function. If you want characters to perform actions in a specific sequence, just say something along the lines of “Corrin, attack on my mark”, and the next time you say “mark”, the function will execute. All voice commands in the game are also customizable, from the movement orders to the very character names, which also integrates near flawlessly.

However, due to the consistency of the voice technology, the level design suffers as a trade-off. Controlling troops in a StarCraft-esque level of depth would obviously be overwhelming in a solely voice-based system, so each level in There Came an Echo is thus dumbed-down when compared to other RTS titles. Options to control the game in other ways, such as using the mouse/keyboard or a controller, exists, but the difficulty drops significantly if changed as such. With the way the game was designed, the only difficulty lies with the micromanaging of your verbal commands instead of the management of the actual characters in the game. 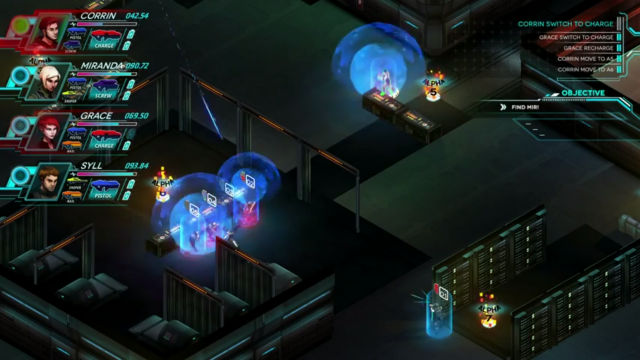 At its core, There Came an Echo is only a shell of its fellow genre companions, but some minor additions somewhat make this gameplay less disappointing. Before each level, you choose the loadout for the characters (up to two by the game’s conclusion, not including the pistol), ranging from a standard pistol and sniper to a weapon that can attack multiple targets near each other. Along with this, each character can equip perks (also up to two by the game’s conclusion) with each perk (and weapon) compatible across all characters.

The system is simple and straightforward, but is also rather disappointing, as there was a lost opportunity here to craft a large-scale customization system, perhaps akin to something like 2014’s Transistor. Most likely, the system was cut down due to its story elements, and in turn, the game’s short length. I finished the game just north of four hours, with at least one third of that being reserved for the game’s various cutscenes; that leaves just a little more than two hours for actual gameplay. Call it a good or bad thing, but this game left me yearning for more on all fronts, that I just didn’t get.

At a technical level, There Came an Echo is sufficient. The game evokes an interesting art-style within its isometric perspective, abundant with lightly shaded colors. All characters models are rendered in 3-D, with all backgrounds pre-rendered. Musically, the game utilises an original soundtrack containing three different contributors. The arrangements are electronica-based and fit well within the game’s given scenarios, but the tracks aren’t especially memorable outside their intended environment. In addition to this, it’s worth noting that There Came an Echo also exhibits an exceptional user interface. Menus are presented clearly, but the twist is that navigation is not restricted to your mouse or controller. Voice commands are fully functional with the UI, allowing an ease of access that is welcomed with open arms. 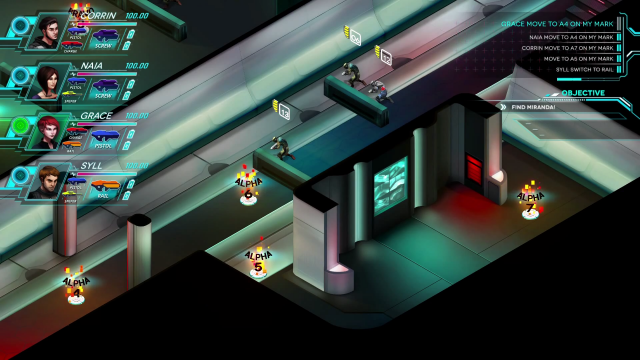 The value of money varies from consumer to consumer, and There Came an Echo’s worth for its price is certainly questionable. Although stripped down, the gameplay that is present is still generally competent and works with the given technology. However, the level design can only be referred to as disappointing, consisting of layouts that are generally dumbed-down when compared to its RTS companions. In a sense, this was a limitation that Iridium Studios just could not get around due to the genre, making me question where this excellent voice system belongs, if at all. Regardless, the simple level design becomes redundant in the light of the game’s short length.

Outside of the single-player story, the only other mode is a wave-based combat session to basically just practice the voice system in the heat of battle. That single mode aside, you’re paying for just a four hour experience, not to mention that a good portion of that time is spent watching cutscenes. Its story is interesting, but the unlikable characters get in the way of fully expressing this narrative. There Came an Echo should by all means be commended for its success with voice-based technology, but I cannot recommend it in its underwhelming state, especially at the price for the limited package you would be paying for. Passion was clearly put into this project, but the sum of its parts is better on paper than it was in execution.

There Came an Echo (Reviewed on Windows)

Although stripped down, the gameplay that is present is still generally competent and works with the given technology. However, the level design can only be referred to as disappointing, consisting of layouts that are generally dumbed-down when compared to its RTS companions. Passion was clearly put into this project, but the sum of its parts is better on paper than it was in execution.

There Came an Echo