This War of Mine Review

Pavle is sick again and Katia is bleeding from a horrible wound in her leg. The plummeting temperatures in the city have left snow drifts in our ramshackle house, needing extra fuel for the furnace and extra work during the day. What’s worse, bandits raided last night and stole all of our food. There’s an old couple living on their own nearby; I’ve left them alone so far in this war but they have so much and us so little. I pack my rifle and a few bullets and head out for the night, dreading what I’m going to need to do.

There are many games churned out these days that involve an intrepid hero running through war-torn streets gunning down every enemy in sight. Often in these one-man-army titles the bombed out buildings and concrete foundations are your momentary cover, something you crouch behind for a few seconds before moving on. Have you ever stopped to wonder about the people who might be trying to live in that building, or the smoking ruins of the city?

This War of Mine, developed by Warsaw-based indie devs 11 bit studios, aims to bring that reality home. The game shows the side of war often neglected in AAA titles: huddled refugees, dirty, hungry and sick, trying to make their way amidst the rubble and ruin. In this survival sim the player takes control of a group of civilians in the fictional city of Pogoron and is tasked with ensuring that they survive the civil war that rages all around them. 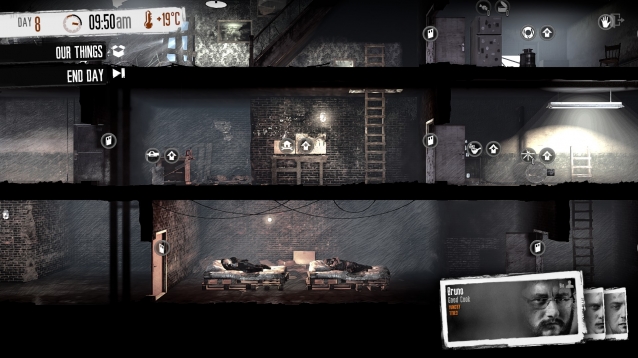 The game is graphically very similar to post-apocalyptic side-scroller Deadlight: colours are washed out and dark, while the background is ever-shifting due to an interesting pencil-shading effect. Despite its side-scrolling nature, the environments in This War of Mine have depth and detail – from burned out cottages to sprawling construction sites. Characters move naturally and realistically, whether clambering over debris in their way or bursting through broken doors with hefty shoulder barges.

Each survivor has their own biography, skills and abilities that will be useful in different ways. Some may be good cooks or fast runners, others might be able to carry more loot or use a gun efficiently. Starting with three characters (picked at random by the game) the player is tasked with shoring up their chosen home: a clump of ramshackle apartments in the city centre.

In order to rebuild and thrive in the warzone, you will have to send out one of your party each night to gather resources. These can come in the form of raw food, wooden planks, broken weapons, herbs and medications. Each can be used to construct improvements or take care of your characters. You will only ever be able to bring a certain amount back with you, however, forcing forethought and planning, often there will be days where you will have to (guiltily) watch your party grow hungry or tired. 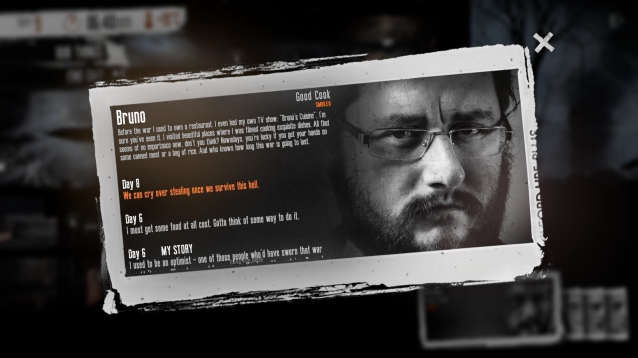 This War of Mine is a game of choices. Do you search the nearby supermarket for food? Perhaps you need to raid that local garage for materials? Or do you attempt to trade with the government militia, even though they’re violent and unpredictable? Each one can have cataclysmic consequences. The game never ceases to remind the player of the fragility of their survivors, something that ramps up the tension whenever you might encounter armed thugs. Even when equipped with weapons later in the game, one stray bullet can be all it takes to lose one of your party.

A system of upgrades to your home base gives the game an overarching goal when at times others might have flagged. The scarcity of resources will often force the player into choosing one or the other and meticulously managing resources. Later in the game environmental factors push the player further, with snow and bandits adding more challenges on top of simply surviving. Small-scale secondary quests will from time to time appear at your door, requiring one of your refugees to go off on a mission they might not come back from.

Scavenging in the game is intuitive and the stealth mechanics well thought out. Every action produces a noise bubble that will expand depending on the action – sneaking produces a small one, sawing at metal bars a large one. Avoiding roaming patrols and heavily armed enemies can create heart-pounding moments where players have to make the decision to press on or cut their losses and head for home. When you are discovered, whether by chance or by design, combat is swift and brutal. This War of Mine features cover-based mechanics but a lot of the time the combat can be over before you’ve even realised that the enemy has spotted you, which can be extra frustrating if it was your favourite character getting shot in the face. 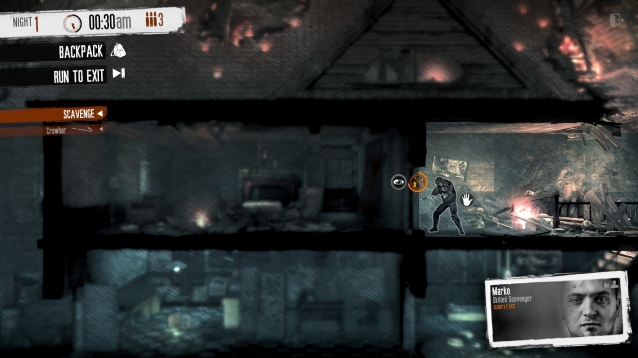 It’s hard not to grow attached to the cast of survivors in This War of Mine. As the game goes on, each will reveal a little bit about their past, as well as their thoughts on missions and events. I discovered that my cook, Bruno, was a self-centred coward who never liked going out of the safehouse and had a “better him than me” attitude. My weapons specialist, Roman, hated violence, and would get depressed if he ever had to shoot anyone. Then there was Katia, who would cheer everyone up and get enthusiastic about the littlest things. The connections you form with these characters is intricate and when you lose one you truly feel it. Within the space of two nights I lost both Roman and Katia, leaving two survivors behind who were sick and weak. One eventually went insane, huddled in a corner refusing to move until he died of starvation. With the snow falling outside it was truly grim viewing, and in many ways incredibly heart-wrenching.

The game’s UI is minimalistic and most actions are completed via clicks on action bubbles throughout levels. Although this aids immersion it can be confusing for a new player (as the game features no real tutorial to speak of) to grasp what they are supposed to do. There are a few localisation issues here and there too, with some dialogue stunted by missing words or tenses – yet nothing large enough to break the immersion.

This War of Mine’s mechanics are so well polished that you will find yourself playing into the early hours of the morning continually thinking “just one more night”, “just one more improvement”. Everything from the atmosphere to the characters to the gameplay is presented in a unique and fantastic way. This War of Mine offers us as gamers an incredibly poignant and memorable experience of the other side of war that is rarely, if ever, revealed.

This War of Mine’s mechanics are so well polished that you will find yourself playing into the early hours of the morning continually thinking “just one more night”, “just one more improvement”. Everything from the atmosphere to the characters to the gameplay is presented in a unique and fantastic way.

This War of Mine Reaches Version 2.0 with Modding Tools

This War of Mine Smartphone Launch Trailer

This War of Mine Available on iOS and Android Devices

I've had my eye on this game since it released. Definitely going to give it a shot after reading this!

For a game so early in release it's incredible. Also really bloody hard.

@[694880785:Alexander Hamilton] So you're saying that some games are released in a not-incredible state? But what if I preordered one of those?!

@[537776659:Andrew Acelister Duncan] There's an article about that somewhere around here, I can't remember where...