Timberman VS is the sequel to Timberman, the wood-chopping, addictive game where players are tasked to chop as many pieces of wood as possible as quickly as possible to unlock over 50 characters.

Timberman VS does the right thing by not trying to change the formula at all but rather building upon it. Despite the heavier focus on multiplayer, Timberman VS' three different modes can all be played in single-player, allowing for a perfect experience very similar to its predecessor's.

Everything Timberman did well is improved upon in the sequel; however, some things were taken away that I was sad to see go. For instance, the new way to unlock characters is just really through persistence and perseverance. Although Timberman worked in a similar fashion in this area, some of the characters such as Dwarf and Mr. President had unique challenges which included getting upwards of 300 in score three times in a row which made them an absolute joy to acquire. However, this new system does allow for players that aren't as good at the game to be able to enjoy the skins that they couldn't get in the original, so in the long run, this is a better method for a wider variety of players. Unlocking the characters isn't a particularly difficult chore. Although there are 75 characters (all of which are acquired through playing), the several game modes make unlocking them a breeze, especially due to how fun the game actually is to play. The main problem, however, is when I found that I wanted characters that were more towards the end of the list, which meant that I wouldn't be able to play them as I farmed achievements.

The two new game modes introduced into Timberman VS are the Hero and Race modes.

Hero has the player chopping wood similarly to the Classic game mode, however, there is a birds’ nest at the top of the tree, and players must cut it down until they can save the little birds. This mode has three different difficulties; Beginner, with around 200 wood per tree; Average, with a range from 300–580; and Axe Master with a whopping 700–950 range. One achievement is tied with each of the tiers, and once the player successfully saves them they get bonus EXP leading to the next unlockable character. The Race game mode is very useful for farming experience for characters, given that since you can't die, all of the 5,000 pieces of wood go towards the total of experience which net around two characters per run.

Although these two game modes are pretty interesting and fun, Timberman VS' biggest downfall is its lack of player base. To the difference of Timberman's 24-hour peak of 101 players, Timberman VS' is 80. Although the difference in number isn't drastic and sounds negligible, you can't actually queue up for all of the game modes present in Timberman VS, which means that the player base is split among the Classic and Race game modes, and that is excluding the fact that Race has three different modes within it: Short, Medium, and Long races. After playing for several hours, I was unable to get matched into a multiplayer round. This is a huge downgrade from Timberman which still finds lobbies within seconds. 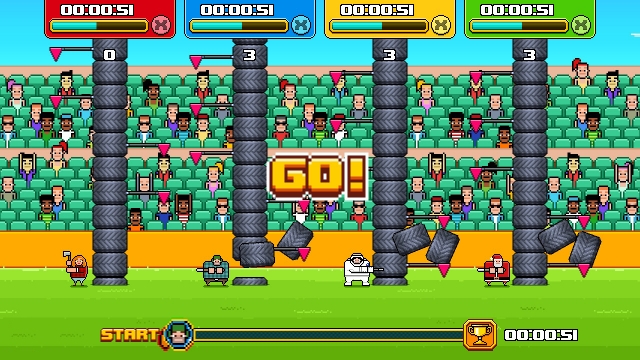 Timberman VS is a great sequel, with all of the new things added and although some of the previous characters have been retired, new ones were added. And, the greatest highlight is the different game modes present. Additionally, it's quite useful to have different scores per character which opens up the opportunity to add self-imposed challenges such as taking all of them past the 1,000 mark. I just wish that its multiplayer was as well incorporated and supported as the original's.

Timberman VS (Reviewed on Windows)

Timberman VS built on everything that made Timberman the great game it is but sadly the absolutely dire state of the multiplayer matching means a large portion of it simply cannot be enjoyed unless you have a built in friendship group ready to play or do so alone.