When you’re a kid, having a racing game featuring all the cool cars you play with seems super cool. Even as an adult that seems pretty great! The NES had Micro Machines, the awesome game that had you playing as a toy car in levels set around the house like the kitchen, bathroom and even the desk in the bedroom. So, when I saw screenshots from Tiny Racer I got the same vibe. There are levels set in the bedroom, in the kitchen, at the beach, and at night. Plus, there are eight cars unlocked right from the beginning so you aren’t stuck with just one to race. You can choose between a jeep, station wagon, ‘90s looking sedan, sports car, van, and even a sports car. The game, developed by Game Solutions 2 and Team 6 Game Studios, seemed quite promising, unfortunately there are a lot of things that don’t work great or are just really weird. The main menu for the game has a few options. You can play single or multiplayer in a tournament consisting of two or three tracks depending on the difficulty you choose, or the arcade setting. If you play on your own you can also choose the Time Trial option. There are ten different tracks that you can play on but only a couple are unlocked from the get go. The rest will have to be unlocked by racing and finishing in the top three. This is really unfortunate because even on easy difficulty finishing in the top is incredibly hard. After playing for almost two hours I only had access to four of the tracks.

The controls for this game seem easy at first. A to accelerate, B to brake, turn with the left thumbstick and you use ZR to respawn. I thought it was odd at first to have a button for respawning but it ends up being one of the most used buttons. There are so many times when you get stuck on a rock, get hung up on some invisible pixel, or land upside down with no way to right yourself. Why would they put in so many jumps that are impossible to land? Even my computer opponents would be stuck upside down. Or they would just be doing 360s for no reason. Maybe they were just confused on where to go? If you aren’t following the pack of other racers it is really hard to figure out where you should be going. At times you are required to do things like drive through pylons to stay on the track but other times they are there to block you from falling off the track. I ended up launching my car off a cliff more than a couple times. 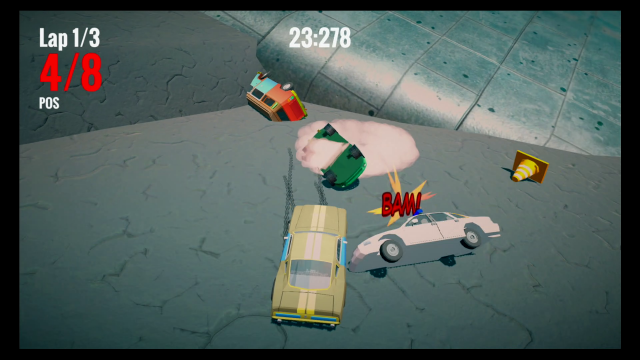 If the confusing tracks weren’t tricky enough for you, the controls are ridiculous. It is really hard to make the car go where you want, especially if another car smashes into your car. For some reason when I tried the game in the Switch handheld mode it was almost impossible to get the car to turn. I even made sure my Joy-Cons were calibrated and tested them all and it still had issues. So, instead I put the game on the television and used the Joy-Cons in the controller grip. I could actually turn the car now, but if another car bumped into you the car would fly right off the track or get spun around. It didn’t matter which kind of car you picked, they all felt and controlled the same. If you choose a van you would think it would be heavier than a little sports car. I guess since you are a toy and not a real vehicle they all weigh around the same. The pit crew that works on your car between races must be crazy fast because between each race they have time to repaint your whole car. I would choose a red sports car and it was always a surprise to see what colour it would end up being. I figured maybe it was a setting in options that caused this. I looked at the graphics setting and I thought maybe the fact the battery saver mode was on might be the reason the colors were getting all messed up. So I turned on the graphics to the highest setting and went to try out a race to see if the issue was fixed. I picked the police car so it would be super obvious if the colours were right. Nope, I still had a magic rainbow car that changed its colour every race. Instead of black and white I had an orange and green car, or the next time blue and yellow. It was so weird.

This game definitely had promise but it just turned out to be super frustrating to play. If you play a lot and memorise the layout of the tracks you have a better chance at advancing. Though I wasn’t having enough fun to sink all the required time in. Even my son who loves toy cars told me I should take Tiny Racer off the Switch.  Tiny Racers just doesn't deliver an enjoyable racing experience for kids or adults.

Tiny Racer looks like a super cool toy car driving game but the controls and crazy glitches make this game more frustrating than anything. Even the comic book "sound effect" words don't help it.