Developed by 5Ants, Tiny Thief is a cute and dainty addition to the point-and-click adventure genre, using only your left mouse button to guide your protagonist through short missions of trickery and misconceptions to obtain what he wants. Tiny Thief, originally an iOS/Android game has landed itself on your Steam “New Releases” page, and its transition from mobile to PC is flawless in the gameplay, visuals and sound departments.

The objective is simply to complete levels by finding objects and avoiding guards as you’re tasked with maneuvering your way around different scenarios each time. The tutorial you’re faced with in the beginning is rather straightforward, using only images and shapes to teach you the basics of the game. In Tiny Thief there isn’t a great deal to learn, so you’re in and out of the tutorial within a few minutes and on the path to robbery. 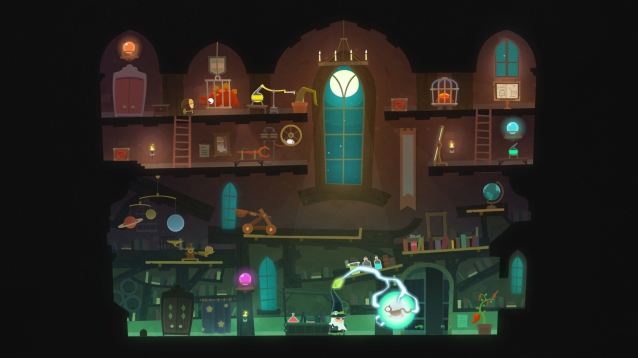 Each level contains at least one object to steal or one mission to complete; as they progress, optional ones will appear and you can decide if you’re up for the challenge, or just want to power through them as quickly as possible. Personally, I get a sense of failure if I finish a level without discovering all of the optional objects. Luckily, in the main menu, a treasure chest icon allows you to see the items you’ve found, and the ones you’ve left behind.

Levels start off relatively easy and don’t increase much in difficulty, but this makes for a relaxed gaming experience that gives you the ability to hop in and out whenever you so wish. For the majority of the time there’s an extra step to take in each area of the game, or another guard to fool, and the way your protagonist decides to hide when they’re caught red-handed means that having to restart the level isn’t something to be taken to heart, all of which stops the game from becoming repetitive and boring. Prior to each level you’re presented with delightful comic-like image strips giving a basic overview of what it has in store for you, though it’s not necessary to pay too much attention to this, as the menu screen for the level will inform you of what object to look out for via animated characters. I would advise you to memorise the objective before you press play, or you’ll be left aimlessly clicking random items in hope of a clue. Speaking of which, one of the very few icons that appear on the screen while you’re playing is a hint (but pretty much instruction) book, it can only be opened every four hours, but will tell you exactly how to complete the area you’re in. Tiny Thief is a beautiful game, with an alluring art style similar to that of Angry Birds and the like, the soundtrack also fits perfectly with the upbeat and cheerful vibe the game emits, making it a joy to play at any time, for anyone. I’ve highlighted many of the great things this game has in store for it’s players, and truthfully there aren’t many areas in which the game falls short, it can be completed in a disappointingly short time of 2-3 hours, but for a game originally for mobile, a huge amount of gaming hours aren’t to be expected.

This game secures a high spot on my recommended list, and at the time of review marked up at just £3.99 on the Steam store, one might say this game is a steal.

Follow your protagonist through this short and dainty point-and-click adventure as you’re tasked with sneakily fooling guards and completing missions in order to retrieve the items you were sent in for.