Total War: Warhammer The Grim and the Grave DLC Review

Total War: Warhammer is an investment. That’s what Creative Assembly and SEGA want you to think. The game, released this Summer, has already accumulated enough DLC that to purchase them all you’d need to pay almost as much as the base game (£27.96 vs £39.99). To be honest, it wouldn’t feel right if a game sponsored by Games Workshop - famous for re-doing old ground - didn’t come with a host of upgrades, do-overs and cosmetics.

Despite that, The Grim and the Grave has arrived with a fairly robust set of extras for Warhammer fans. The pack bolsters the rosters of both the Empire and the Vampire Counts, hoping to flesh out the factions a little more in anticipation of the next large expansion release (slated to occur in 2017). It includes legendary lords Volkmar the Grim for the Empire and Helman Ghorst for the Vampire Counts. Along with these iconic heroes comes a collection of unique “units of renown” that can be recruited by each factions. These units have locked stats and won't upgrade with experience but offer a quick way of getting elite battalions in the early game. 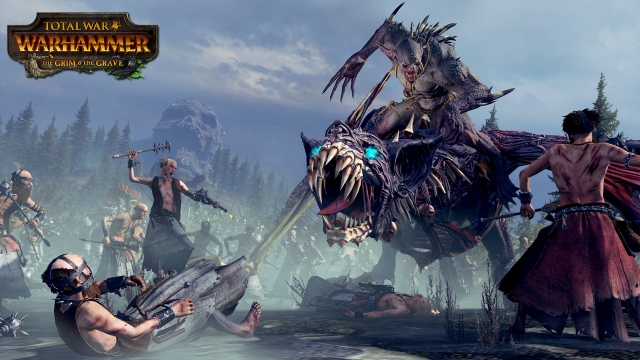 To give you an exhaustive list, the new units on offer are the corpse cart, mortis engine, flagellants and free company militia. Regiments of renown appear for militia, cannons, flagellants, swordsmen, handgunners, rockets, the luminark, reiksguard and the demigryphs for the Empire and for crypt ghouls, vargheists, dire wolves, grave guard, zombies, hexwraiths and black knights for the Vampire Counts.

There are also a new set of quest battles for each legendary lord and a couple of new agents to utilise on the campaign map. The DLC essentially allows players to unlock a higher level of gameplay earlier in the campaign, and can really help make a difference in those first few turns. The units themselves - and their larger-than-life agent counterparts - while powerful, won’t win battles for themselves and do much to add to the colour and pageantry of the battlefield. If a complaint can be found it’s that these units weren’t included in the original release, especially considering that they’re not much more than reskins of existing models.

Creative Assembly is still churning through a robust schedule of DLC and Free-LC, with a similar expansion to the Dwarfs and the Orcs expected to arrive in the next few weeks. At £6 The Grim and the Grave is as worth it as you deem it. Completionists won’t be disappointed by spending their cash but those who want to shy away from the price can rest assured knowing they’re not missing out on essential game content. Isn’t this really how DLC should be done?

Total War: WARHAMMER - The Grim and the Grave (Reviewed on Windows)

At £6 The Grim and the Grave is as worth it as you deem it. Completionists won’t be disappointed by spending their cash but those who want to shy away from the price can rest assured knowing they’re not missing out on essential game content.

Total War: WARHAMMER - The Grim and the Grave