As much as originality can be praised, so can fine tuning. Tower of Guns manages to hone the Rogue-lite to create an experience that is simultaneously enjoyable, challenging and accessible. The fact that this game was created by one man is a testament to its insane brilliance. Joe Mirabello is the single developer over at Terrible Posture games and deserves a lot of credit for what he’s created.

I’d like to start with the way the game looks. If you’ve played Borderlands you’ll be right at home here. The cel shaded, cartoon look adds to the old-school sensibilities of the rest of the title. The explosions and collisions all look fantastically animated; almost pulled straight from a comic book. Don’t let this fool you, the fidelity of this game is still extremely high and it appears no corners have been cut when producing the game.

Gameplay is straightforward: Old-School FPS design meets randomly generated levels. One of the first things you learn in ToG is that to open doors, you must shoot them. This says everything about the game before even playing it. The simple understanding that this game is about shooting things, finding secrets, having a good time and eventually beating a boss, is what makes it so instantly understandable and, frankly, refreshing. 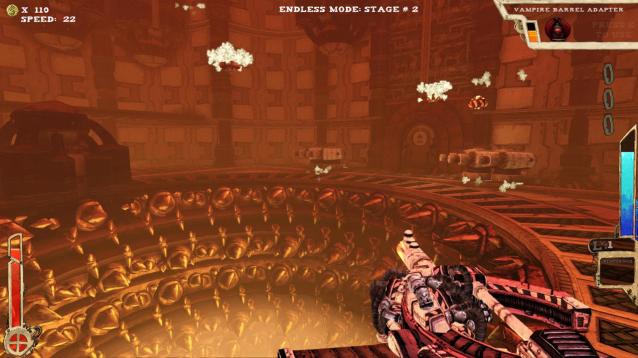 From the off it’s easy to understand what to do: get from the door you come in at, to the one that lets you out the other side. Whatever you do in between is optional. ToG doesn’t bog you down with boring, needless side tasks; they’re there if you want to do them. This reduction in obligation, all the way down to not needing to ever reload your gun, creates an air of fun and accessibility most games fail to grasp.

Levels consist of a few randomly generated rooms all linked together. You’re placed in the starting area and asked to complete the rooms in any fashion you see fit. All are designed with exploration and entertainment in mind. The verticality is reminiscent of games like Quake while the exploration and secrets are a throwback to Doom and the countless others that followed in its wake. Enemies range from small turrets to giant flying tanks with huge amounts of guns, and enemy variety is large enough to keep you guessing, although there is only ever one way to dispatch your foe: hot lead.

The guns and the systems surrounding them are this game’s crowning glory. Weapons work on on a level based system. Choosing one at the beginning of your game and killing enemies - collecting their loot - enables you to level up your gun. With each level your gun gains more damage, higher fire rate, more projectiles and anything else you can think of that would improve it. Taking damage will lower your gun level creating the only real pressure the game gives you: your own performance. 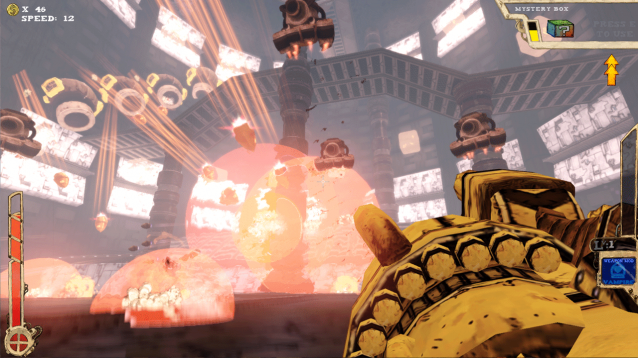 What I learnt as I played more of this game was this: it’s about precision. Taking more cues from Quake, you’re given weapons with ridiculous abilities and it’s what they hit that matters. So sure, you can have thirty projectiles in one shot but if none of them hit, you’re screwed. With the number of enemies ramping up constantly and the damage being done to you skyrocketing, the need to be precise grows with every level.

Although accessible, ToG does still feel challenging at all times. Turrets pop up everywhere and ludicrous numbers of enemies appear out of thin air, adding further to the game-y nature of the title. To deal with these increasing odds stacked against you, there are power ups. Want to double jump? Find a jumping power up. Want to triple jump? Find another. That’s right, they stack. This gives the player so much choice in how they want to build their character. There are coins scattered throughout the levels that, once collected, allow you to purchase randomised power ups at one-use shops.

Finally, the bosses the game eventually throws at you are just a hilariously humongous mixture of various guns that float, teleport and otherwise make your life difficult. The design of a lot of the end battles are fun and usually involve lots of smaller spawning enemies, large bullets or rockets and a lot of dodging. These fights are never boring and rarely underwhelming, making that run up to them all the more enjoyable. 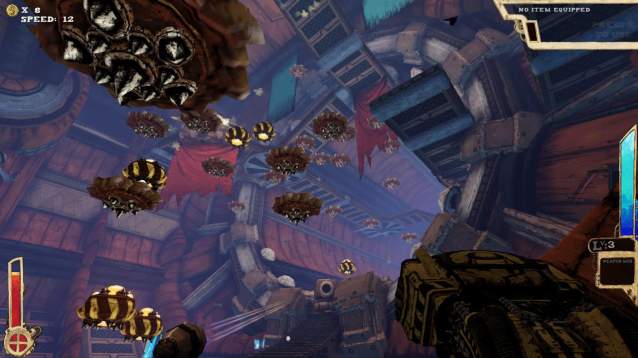 Overall, Tower Of Guns is a stunning example of how old-school design is still relevant and fun in today’s industry. It’s not a matter of just how much there is on display, but how much raw fun and playability a game has to offer. Look no further than Tower of Guns for an indie game showing AAA developers how design works.

Tower of Guns (Reviewed on Windows)

Overall, Tower Of Guns is a stunning example of how old-school design is still relevant and fun in today’s industry.