It’s been a while since players got to jump back into the shoes of the assassin Travis Touchdown and the mind of developer Suda51. Following an initial release on the Nintendo Switch, the latest title in the No More Heroes series is now on PlayStation 4 as a complete edition. With a new perspective, gameplay, and two player co-op does this title hold up to the rest of the series?

Unlike other entries in the series which were third-person titles, Travis Strikes Again is a top-down hack and slash title more akin to something like a dungeon crawler. Playing as either Travis or Badman, in single or two-player co-op, players will run through levels clearing their way through countless enemies and bosses. With a light and heavy attack, players can unleash a few simple combos but most of the damage comes from the skills they unlock throughout their playthrough. The combat in Travis Strikes Again ends up feeling like a mixed bag. On the one hand you are able to rush through weak enemies destroying them with only one slash. Then you encounter bosses that can easily kill you if you are not careful. With a difficulty that feels off balance, the journey through the levels can feel very bumpy. The end result however, is a gameplay loop that sadly ends up feeling very dull and repetitive which you can execute with next to no thinking.

From a story point of view, Travis Strikes Again takes place seven years after the events of No More Heroes 2. When a former baseball player turned assassin, Badman, ends up going after Travis Touchdown, things get a bit weird. The two end up getting pulled into a video game console - the “Death Drive MK-II” - which has it’s games contained within “Death Balls”. From here, Badman and Travis call a truce to find and beat every Death Ball game in order to have any wish granted by the console. Throughout the many colourful and crazy levels that players will explore they will find numerous references, jokes, and opportunities to enjoy story development. Outside of the levels the bulk of the story is told through visual novel sections that push the events forward. What is an interesting thought about Travis Strikes Again is how it feels like a deep dive into the mind of Travis, series creator Suda51, and the struggles each faced. At times, the title can get deep with it’s narrative and that is compelling enough to keep you playing until the end.

Being the Complete Edition, this release comes packaged with all the previously available content for the title. This means that players can enjoy a host of new content including new modes, skills, items, and two new playable characters once they have finished the main game. It’s a nice addition to have but considering you’ll need to power through until the end of the game to enjoy these, it can become a challenge. 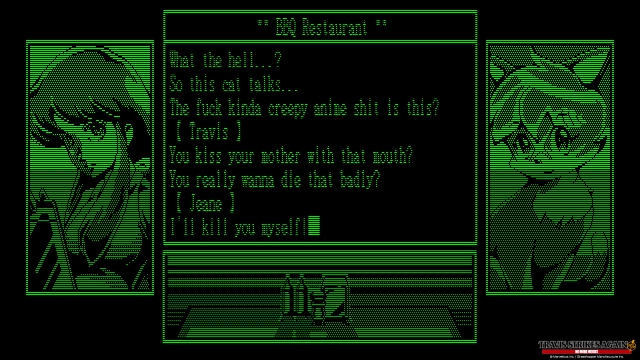 Thankfully though, Travis Strikes Again does a fantastic job in the performance and presentation department. As mentioned, levels are colourful and full of unique visual effects that are a treat for the eyes, while maintaining a solid framerate throughout, that never drops below 60 even in co-op mode.

In the end, Travis Strikes Again is a mixed bag of an experience. For long time fans there is plenty to enjoy purely from a narrative point of view but for newcomers, it might be hard to get your teeth into. The limited and repetitive gameplay doesn’t help too with the whole experience feeling unnecessarily drawn out. There are plenty of hidden collectibles to find but as a linear title, expect to see the same corridors again and again. Travis Strikes Again is an interesting, if somewhat disappointing title.

Travis Strikes Again: No More Heroes Complete Edition might be a limited experience with repetitive gameplay, but long time series fans will find plenty to enjoy in the narrative.