Trine 3 : The Artifacts of Power Review

Trine 3 : The Artifacts of Power has us rejoining Pontius the Brave, Zoya the Thief and Amadeus the Wizard who players of the first two games in the series will know, on yet more adventures caused by the mystical floaty triangle that is the Trine. I admit that I was looking forward to this one, having played Trine 2 on PlayStation 3 and loved it. Trine 3 : The Artifacts of Power lived up to my expectations almost entirely with just a couple of performance issues limiting the fun. Performance issues I blame almost entirely on my running an insider build of Windows 10. 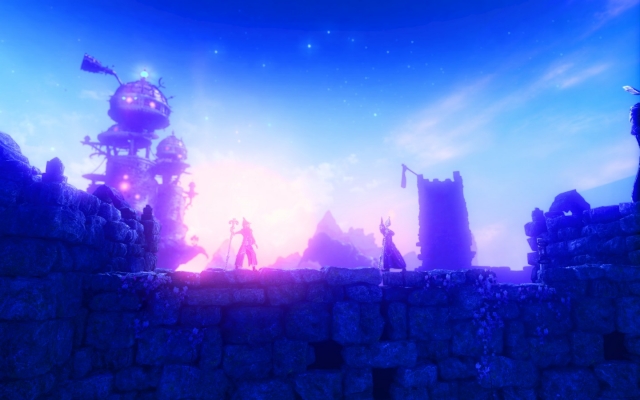 The game has you progressing through the story of the hapless trio after they decide all this mystical superhero stuff is all well and good, but they would much prefer to be normal thanks. So they try to shove their immortality and mystical “thou shalt rescue the world… AGAIN!” back into the artifact. Unfortunately this shatters it, and on our heroes go trying to fix the snafu, discovering on their travels that the Trine is but one of three “Artifacts of Power”. 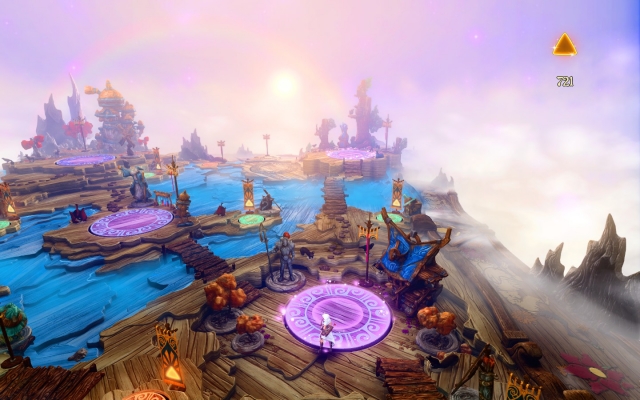 The game itself is a puzzle platformer in three dimensions in which you control one of the three characters at a time switching between the three freely. Or at least, that’s true for most of it, there are side quest styled levels that are targeted to individual heroes from the trio meaning that you can only play as that particular character at that time, but those are short.

Each hero has differing abilities, Pontius has a shield and sword that he can smack enemies and objects with and charge into said enemies with knocking them out of the way. He Can also slam downwards when jumping throwing objects and enemies away from him which gets you a nice bit of breathing room in the middle of a fight. As a twist, when he jumps up in the air, he can grab the shield and use it as a form of paraglider, floating slowly downwards while moving about in three dimensions. Secondly Zoya has her bow and arrow that she can use to attach ropes to hooks, rings and wooden boxes pulling them about every which way. She can also attach two object to each other , tying off lines to keep doors open, platforms pulled out so she can reach them, etc. Lastly, we have Amadeus the wizard, he can use magic to move objects about, create a box to float about, stick to spikes, and climb on top of (a neat trick you will notice is by jumping when on top of the box and lifting it, you can bounce him huge distances). Most of the puzzles you find in the different levels of the game are surmountable by one character or another. 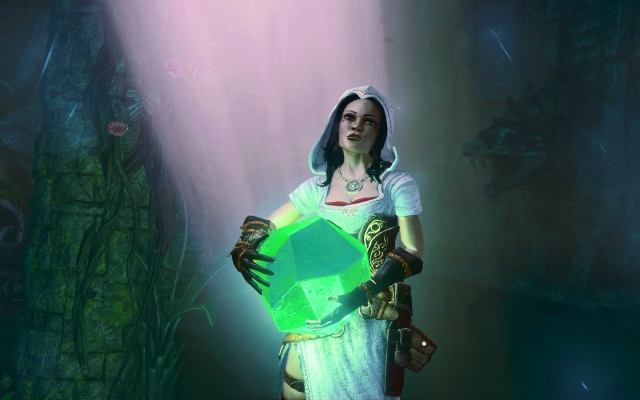 I find myself using the word “astounding” when describing the visuals to this game to people, it takes the already impressive graphics from the first two games and kicks it up a notch. The third dimension in Trine 3 adds more than you would think to the puzzles and gameplay, it means Pontius can charge into things and knock them towards you and off the level, Zoya can swing into the screen and grab handholds and the like. Of course, this can also lead to pounding your head on the desk as Zoya sails off the edge of a platform and into the depths, Pontius can charge clean off the back of something and Amadeus can end up bouncing himself clean out of the way to inevitable squishy death.

As you progress through the game you collect orange floaty “trine angles” that unlock each subsequent level as you grab them. The side levels each tell an individual storyline for our erstwhile heroes recounting a smaller adventure they took part in. Amadeus has a dream about the magic academy, Zoya tells about what she was doing before the Trine got involved again, and Pontius falls down a hole (be glad it doesn’t involve the sheep). 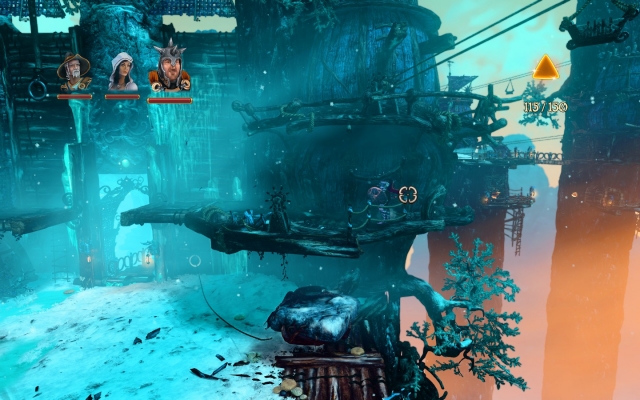 The game has multiplayer, that allows up to three people to control each character in a co-operative journey through the game world, and an editor that already has some fun little things available in the Steam Workshop, no doubt this will expand over time as the player base gets more used to what it can do.

All said, this game is… short. A not so speedy run would take about eight hours from start to finish, you could probably rip through it in four if you tried. Even so, it’s a great little game and I have no problem recommending it to anyone who sits still long enough to hear.

Trine 3 : The Artifacts of Power (Reviewed on Windows)

A well made, if a little brief, third game in the Trine series, and hopefully not the last.

Trine 3 Gets a Free Update

Trine 3 : The Artifacts of Power