TSIOQUE is, I think, the first point and click adventure game I have played, but I reckon it was possibly one of the best introductions I could hope for to the genre. Yes, it was frustrating at times and more often than not completely nonsensical, but the combination of beautiful hand-drawn animations and the catharsis of solving a puzzle that previously had me stumped made for an experience I’m not likely to forget any time soon.

The game follows the titular princess as she attempts to escape the clutches of the evil court mage who has taken over the castle in the Queen’s absence, presenting this task in what feels like a pretty non-linear way. After escaping the dungeons, the player is met with a courtyard that acts as a sort of hub that opens up other pathways. Some of these paths never extend much beyond one room and you could deduct marks for that, but there is often so much detail packed into a single scene that the adventure feels expansive and vibrant without needing to pad out the castle with long and pointless treks. Limiting the journey like this also helps to highlight the theme of entrapment that TSIOQUE works so hard to build. Many obstacles draw - and sometimes require - the attention of the court mage, who acts as an oppressive force that constantly bares down on the player. The dangers to the princess are pervasive and very real, with blob-monsters, dragons and goblins wanting nothing more than to take me hostage or just straight up devour me. And yet when the giant duck king had a go because I didn’t have the medal he wanted, I didn’t bat an eyelid; the game-world gets away with far more than perhaps it should, and I think that’s in no small part due to the presentation. 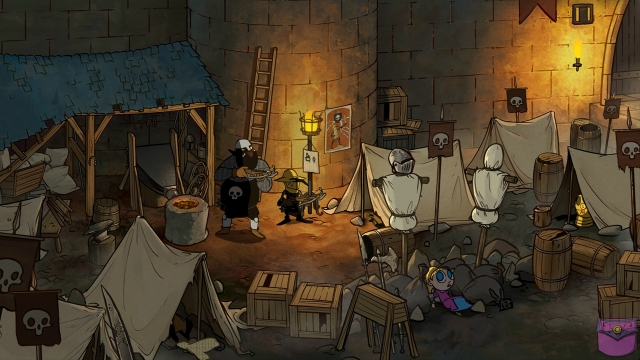 I absolutely loved the animations - to a point. The developer does a fantastic job of conveying personality through the movements of every character, Tsioque understandably standing out as a particularly good example. The princess rarely runs and wears a perpetual scowl, meaning that despite any frustration we may be feeling we always know our character feels just the same way. That said, this does make the back and forthing not only monotonous but painful. I remember there being some rooms I was very reluctant to return to simply because the animations Tsioque would go through to do what I wanted would be so time-consuming that I wasn’t willing to search around for what I perceived as potential false leads. This comes back to that dilemma between a game looking good and feeling good to play. For all its merits, I didn’t enjoy the physical action of playing TSIOQUE partly due to the game’s insistence on meticulously presenting every detail, and partly due to the rather jarring gameplay events that require quick player input. Deaths are inconsequential as the game always places you right back where you were, but for me at least they always felt unavoidable the first time either because the inventory didn’t feel responsive enough or because I wasn’t fast enough in realising what was happening. I’m also going to take a moment to talk about the soundtrack, for no other reason than that you can buy it on Steam for an extra £4.79; maybe the developer did put enough work into the music to warrant that kind of price tag, but I personally found it to be unremarkable. I can’t remember a single track from TSIOQUE, so I’ll be damned if I’m paying extra to stick it on my iPod (...people still use those, right?). 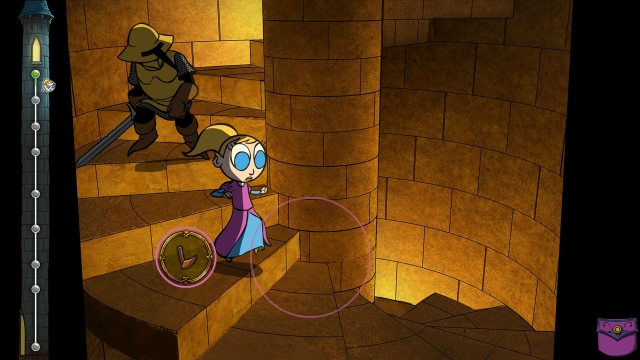 I’m not going to discuss the story any more than the advertising does - if point and click adventures get you going I reckon you’ll have a blast uncovering it for yourself. Sure, I felt my fair share of frustrations, but the game managed to reward my resilience in ways that felt really satisfying. By far most of TSIOQUE’s charm stems from its superb art style and the strength of the themes that are presented, so I would have preferred an experience in which the quick-time type scenes were a little more… absent. All in all, it’s a three to four hour experience perfect for killing some time if you’re looking for a heartwarming one-off narrative adventure.

Charming visuals, puzzle solving, medieval fantasy, there’s literally nothing else you need in your life. I had a few frustrations here and there, but all in all TSIOQUE felt so worth my time; grab it for a rainy day, curl up on the sofa and prepare for a game best experienced first hand.