Ever feel the need to be a piece of pizza or fruit and compete in a variety of mini-games against food from other food groups? Ultra Foodmess might be a worthy party game to add to your repertoire for a family game night. This game has local multiplayer for up to four players, but if you can’t round up three other players, you can always compete against bots. The amount of points required to win is set at the very beginning. I found leaving it at the default three points made the round way too short, so when we played we would have it around ten points. At the start of the game, there are five different "kawaii" food characters to play as; a slice of pizza, a tomato, a strawberry, cherry and a sandwich. As you play, more cute characters will be added to your “menu”. They all start off looking super happy, but that’s because they don’t know what they will be facing. 11 food-themed mini-games await the characters, ranging from painting the floor with jam in Juice It Up to more violent type games like Nice to Meat you where you spin a mace made of meat and spikes at the other characters, to Chop Chop where saw blades come after you. The player chooses which games will be played in the round, or if you can’t decide and want a variety, All Modes is the option to choose. My one issue with this is, it seems you will play some of the games a lot and others hardly at all. Out of the 100 rounds I played with the kids, we only had the Nice to Meat you mini-game twice, but we played the others seven or eight times. So, it definitely wasn’t even, just totally random. 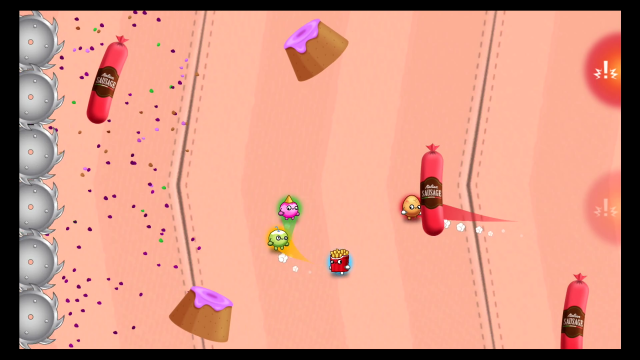 This game is accessible to almost any age. Most of the time you just have to run around and avoid the other characters and obstacles. I will warn you though that when you are running around it feels like you are on a sheet of ice. You are always sliding around, which is awesome when you want to smash into the other characters, but definitely adds to the challenge. The settings for the levels don’t have much variety and you can’t choose which level you want to play. Sometimes there will be obstacles that you can push around, like pieces of chocolate or sombrero hats. These can also make great barriers to hide behind when other players are trying to tag you. Each mini-game only lasts for a couple of minutes max until a winner emerges. When that game is over, you see all the characters have glasses they are trying to fill with lemonade or whatever refreshment they are assigned. Whichever character fills their cup first is the winner. 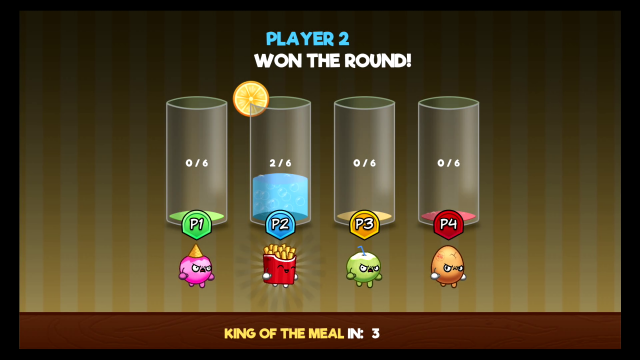 There is no story here whatsoever. So it will be up to you to be creative and dream something up. Maybe the food is fighting to prove which food group is the most superior, or to prove that they are the universal favourite. Whatever story you decide to go with, all that matters is that you have fast reflexes and you are the last character standing. If you are looking for a new multiplayer party game to play with some cute characters that is easy to play, Ultra Foodmess is a fun one to check out.

Super cute characters and fun minigames to play here. No story and not too much variety for levels, but if you want something super easy to play locally, this is a fun one to try.