Ultracore is an unashamed blast from the past, bringing old school run and gun action kicking and screaming into 2020. Originally an unreleased 1994 Mega Drive title, it finally saw the light of day as a bonus included with the Analogue Mega SG. Now seeing a full release on the PlayStation 4 and Switch, does it hold up or should it have stayed locked away? 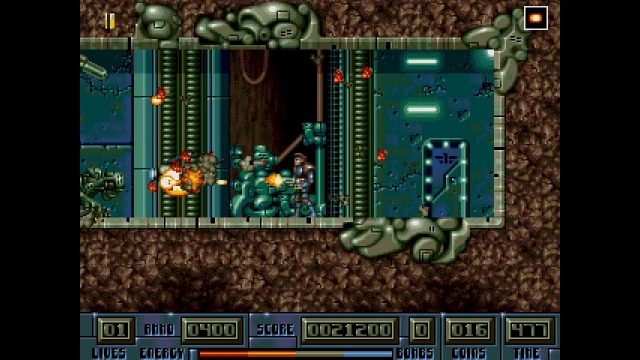 It’s not often that a new retro-styled game is actually the real deal but Ultracore is just that, it’s not a game designed with today’s sensibilities in mind and made to look like an old 8-bit or 16-bit title; it genuinely was going to come out in the mid-90s for the Mega Drive before it got cancelled. Created by Digital Illusions which later became DICE (responsible for the Battlefield series), it was originally intended to come out on the Amiga, Mega Drive and Mega CD.

The game itself is a run and gun platformer that brings to mind classics such as the Turrican series as well as influential Bitmap Brothers titles from the ‘90s such as Gods. Split into distinct levels, you navigate the fairly large but mostly linear levels hunting out keys and levers to open doors and reveal platforms as you find your way to the boss at the end of the stage. 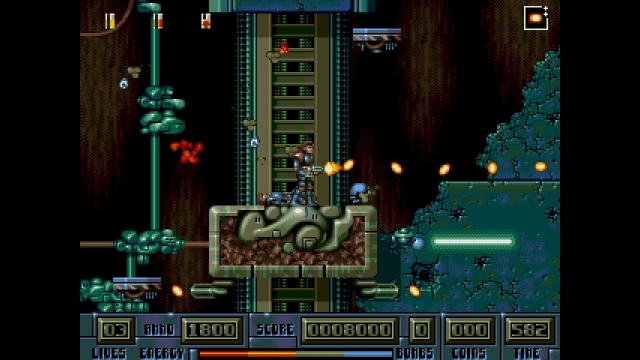 Your character can shoot in all directions, either by standing still and rotating their aim or whilst on the move. Aiming whilst moving is initially a little fiddly as you become locked to the direction you are facing and getting used to how this works combined with ducking will lead to a few deaths. Movement and combat feels quite tactile as a lot of floating platforms “bounce” when you land on them, and like the aforementioned Turrican this allows you to get a tiny bit more height on your jumps if you leap at the top of their wobble.

Levels can also feel a bit unfair with a lot of design common for the period with leaps of faith and death pits aplenty. Some areas require some pretty pixel perfect jumping which can lead to some frustrating repeated deaths. The inability to move the camera to look below or above doesn’t help alleviate this leading to some cheap, otherwise avoidable deaths.

You can obtain a variety of weapons which you can switch between from caches dotted around the levels, often near corpses of your fallen comrades which offer greater damage but at the cost of using ammo. Your base weapon has unlimited ammo but isn’t as effective as the weaponry you find, especially against bosses. You can also jump and bounce off most enemies which does do a small amount of damage but more importantly can get you out of harm's way. 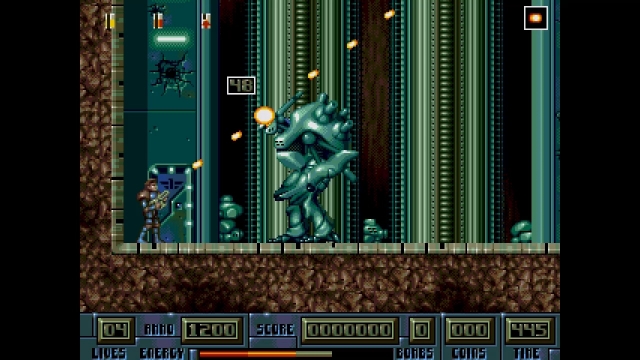 Boss designs are large and intimidating; their patterns are quite simple but eliminating them requires some finesse and feels satisfying. Fortunately the penalty for death in the game is quite lenient in that you get placed back within spitting distance of where you perished and any damage you had dealt to a boss is persistent; meaning you can brute force them to learn how to take them down. You do have a limited amount of lives and continues though so you can’t just waltz through the game in its entirety.

The game doesn’t really make any concessions to modern gaming outside of this leniency though; it doesn’t hold your hand, it expects you to figure out how things work and whilst it’s not really a complex game this might put folk off. It is honestly refreshing however to be thrown into a world with no prompts and just being able to get on with it.

Visually the game looks great if you like the metallic style of the era, the enemy design is a little generic, lots of squat robot designs mixed with turrets and enemy drones, but they fit the aesthetic. The game also sounds fantastic giving you the option of either authentic chiptunes or an entirely different Synthwave soundtrack, both options are great and are worth hearing in their entirety!

All in all, Ultracore is a solid retro platformer that feels really nice to play once you get a handle on the movement and aiming. If you are hankering for some genuine retro action it’s a fun time but don’t expect an easy ride.

An enjoyable time capsule of a game that can unfortunately feel a bit unfair due to its age combined with some quirky controls. Non-stop retro action with great pixel art and two stunning soundtracks that is worth your time if it’s something that appeals.