If you’re on PC, Under Night In-Birth Exe:Late [st] was updated to cl-r in terms of patches and character balancing. The only thing you have to buy is the character Londreika, if you’re on console you will need to purchase cl-r even if you own st. If you’re acquainted with Under Night, you can skip to the changes section. For those new to the entry, welcome to one of the easiest to learn and hardest to master fighting games out right now.

This is Under Night’s third release, with cl-r only adding one new character compared to st’s four. It doesn’t redefine the concept of fighting games, rather it refines it into a game that’s focused on teaching you to be the aggressor. The music continues to be great with the new tracks, character and VS music having a somewhat grandeur motif, reflecting Londrekia’s characterisation. The music in general has an eclectic mix of electronic, classical, and almost punk rock instrumentals with a mixed cocktail of synth backing. In terms of music variety, it’s somehow cohesive despite no track sounding the same. That said, it does sound very anime in terms of its rhythm.

Compared to other “anime fighters”, the 2D animations can feel out of date compared to other games like Guilty Gear, BlazBlue, and Granblue Fantasy: Versus with their more modern style and blend of 3D. It might not be the flashiest fighting game, but don’t let that detract you from its core enjoyment: fast responsive fights. For those not experienced with fighting games, not all are made the same. Each one will vary in terms of how technical you have to be. Scrapping the jargon, this is a game that is balanced and made in such a way that every character has options to overcome the odds. It’s also the special sauce that separates it from other fighters. 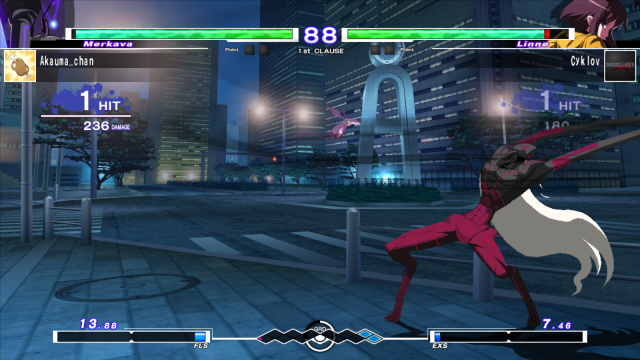 In terms of pacing, if Street Fighter and Tekken are tests of patience and Dragon Ball FighterZ is a race to who can cause an avalanche the fastest, Under Night is a race whilst you drift around corners on a cliff side, testing your mental stamina of how much you can take. You’re pushed to the limit that at worst the game ends in three deadly combo chains or it becomes a drag race of who can take the inner corner and keep ahead. Mechanically the game relies on four inputs: light, medium, and heavy attacks, with the fourth being a charge mechanic. The tutorial is a great primer for teaching you the ins and outs of the game, as well as everything you need to know about fighting games in general. The dedicated missions for each of the 21 characters that covers their basics and for the non-faint hearted it will also drill their movesets into you.

The game itself is very focused on selling you a fighting game that doesn't feature a lot of bells and whistles. It’s not surprising given that it was originally meant for Japanese arcades first, so expectations in terms of content do need to be tempered. That said, the animations and meat of the gameplay are very refined. The only real downside is that NetCode isn’t geared for long (cross-continental connections) distanced private matches. The breakout mechanic of Under Night is the GRD system. To scratch the surface, it’s the second battlefield to the main fight and it’s how you can make what would’ve been a bad match into your winning one. Each action will add or remove from your Chain Shift, and when a Cycle ends, whoever has more Chain Shift will hold GRD advantage. This can be used for bonus damage or cashed in for meter. The bonus damage is a passive boost to the GRD holder’s attacks, and what enables faster matches and gives you a real edge. 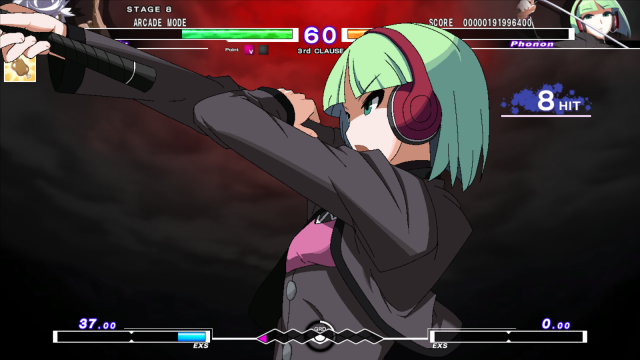 I am one with anime, and anime is with me

However, holding GRD has much more depth than simply cashing the Chain Shift into meter for doing empowered moves. Empowered moves being special attacks or finishers that guarantee kills on a successful hit when the opponent is at red health. Shielding (Holding back and hitting charge) will generate you extra Chain Shift at the cost of a bit of meter, allowing you to be more proactive in the fight. It’s one of the strongest means to changing the tide of the battle, as once you have GRD and the opponent is continuing their assault you can either Veil Off as an immediate counter to knock them back or perform Chain Shifting to animation cancel a recovery to gain meter. That can either be immediately spent to create an opening for your onslaught or straight into a regular combo/attack. But the true aspect of this mechanic is the ability to make an immediate counter with their Veil Off mechanic that can go into your “ultra” known as Infinite Worth that will kill opponents in orange health or equalise the field. As stated, this is a game where player skill is more important than knowledge and why despite having a losing hand you’re able to win matches.

Transitioning from the previous entry to the current one will be relatively easy depending on how experienced you were with st. In some cases the game hasn’t changed much, but for others it’s night and day. Without going in-depth on the core mechanical changes as they’ve been covered in the patch notes on Arc System Works’ website. The summary is that all characters have been given a new move or mechanic to an extent that gives them a new edge in certain areas where they were lacking previously. It’s a clear sign that cl-r is less a new entry and an evolution of st, whether or not it’s why the PC got a free update is neither here nor there. But it’s something that should be factored in your purchase if you have st already on console.

Given that Londreika is the new character to the game, the basic run down is that his new freezing mechanic is something that’s got a high skill floor for beginners and is easy to spam. However, it’s also one of the easiest moves to punish as the ending animation is long enough that doing an advancing block, frontal assault block, or jumping over (with some characters) can lead to devastating follow ups. The freezing mechanic itself has a low skill ceiling; if you’ve experienced Carmine’s Bloodhouse or Byakuya’s webs it won't be too dissimilar in terms of functionality. Except unlike those characters, there is no way to feed his freeze projectiles to prime/proc to extend/increase his combos. Londrekia does have other tools within his moveset that help compliment him within the main cast, it’s just that relative to other characters, the skill floor to ceiling ratio is shallow and is easy to be punished. Given he has practically no good AAs (Anti Air attacks to hit opponents mid-air or flying), he becomes a sitting duck without a strong neutral game to compensate (being able to engage from centre screen to edge). But with friends/casual play, he’s the equivalent of an ice spear launcher that’s easily spammable and has strong long ranged zone control. So unless you want to complete your collection/adding that extra character, his purchase isn’t recommended for more competitive purposes beyond knowing how to punish a Londrekia player.

As someone who’s experienced and loves faster-paced fighting games, this is an easy win and Under Night’s formula tweaks help keep just different enough you feel like you’re mastering a weapon. However, this isn’t for everyone and if you’re after something more feature complete like a proper story mode.