UNDER NIGHT IN-BIRTH Exe:Late is an anime fighting game featuring one on one combat. In terms gameplay there isn’t much out of the usual, but what it lacks in variety, it makes up in the campaign, character writing, and rounded playstyles. In total, this is a fighting game that is easy to pick up. But is relatively difficult master depending on your fighting game adeptness.

Featuring low, medium, and heavy attacks, alongside the usual eight-way joystick inputs. The game can be considered rather limiting to an extent, with the end result being somewhat spammy inputs. It doesn’t feature a strong variety of inputs and combos that can lead to some exceptional gameplay. However, as with any fighting game skill is a key factor to whether or not a game is or isn’t balanced. 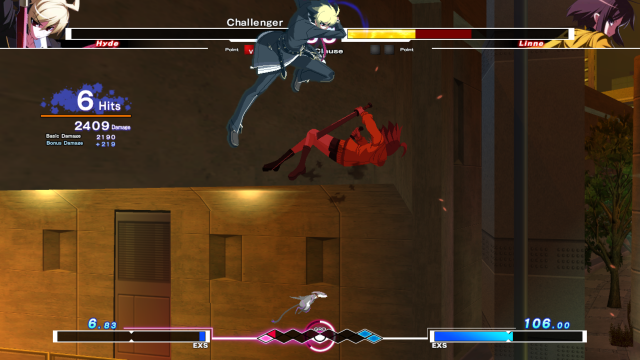 To rise up to the challenge, you must ascend further than the UI!

Having had been in released in Japan for sometime, the playing experience in an arcade proved that, despite what was experienced whist reviewing this game on a laptop. This game has a high skill ceiling, that makes it somewhat hard to grasp initially. Being brutally destroyed aside, certain characters have definite cheese spots that makes certain fights near impossible without precise knowledge of each frame. As I discovered when Merkava was brutalised by Akatsuki (a close ranged fighter), despite the strong space control it has for forcing the opponent into mid-range. However, this doesn’t mean certain characters aren’t prone to cheesing. Merkava being one of them.

Being more fast paced compared to other fighters, it features very little in terms of mechanics to truly bounce back from a brutal one-sided battering. With some characters having counter-like moves, none require you to set up an elaborate shift to turn the tables. This means if an opponent is juggling you in the air, there’s very little you can aside from a miracle. From experience in Japan, I had a perfect loss due to the juggling stopping me from being able to retaliate. But this was a showcase in skill gap I won’t, nor will my friend, ever forget. 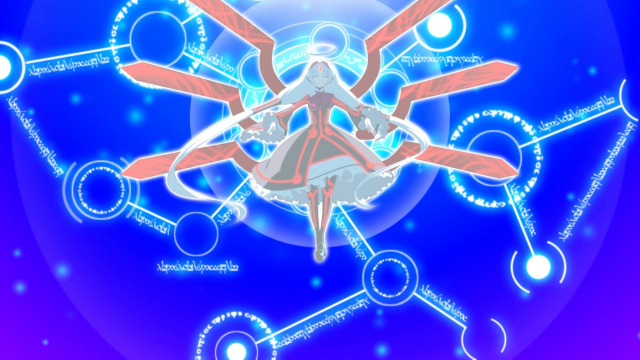 I am a Falsely made In-birth, so as I pray, Celestial Diagram Works!

Despite the battering, a recharge mechanic can drastically flip the table in the rare moment. As most fighters now have charge meters for performing certain specials, UNDER NIGHT has its EXE meter which charges based on your attacks/blocks. Alongside this is a special gauge, that will flip between favouring either combatant depending on the situation. It can provide a potential meter boost based on player positioning, which can turn the tide of battle. In Campaign, this feature leaned more towards the player which can lead to landslide victories using, and abusing, the EXE meter for savage pain trains. However in Multiplayer mode, the bar behaves slightly differently. In some situations the bar would flip to the losing player and could give them the desperate recharge to turn the tables, a la every Anime/hero moment. Or would be completely lopsided to the winning force, resulting in the showoff “Finish ‘em!” cutscene.

However, the one saving grace that’s more reliable and less luck of the draw: is an emergency rage/burst mode when on low health, which can then perform a finisher to help even the odds. But pulling this is somewhat dependent on skill and timing, as when I faced my friend, we couldn’t pull it off in the thick of it and had to take a brief pause to activate it.

Character-wise, writing included, there’s a dynamic range of different styles. Ranging from easy to pick up, to “I need to memorise what each move does to create the notes required for this song to perform this finisher”. The main protagonist and the ensuing cast are somewhat vanilla in terms of the expected. But compared to other Anime and games in this vein, this doesn’t overly sell its story with its character writing. Rather, the story revolves around an event with different perspectives. As opposed to the other way around, which can get rather tedious if repeated consecutively. Alluding constantly to something beyond, it’s a slightly refreshing take on story set up. 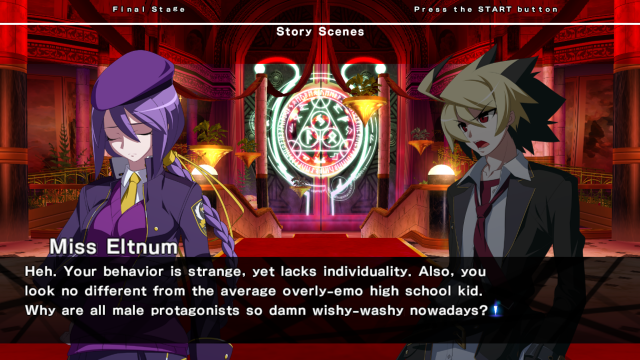 I don't know whether to cry or laugh anymore with her snark.

But in terms of gameplay, this leads into a weird mash of mechanics where the skill floor is almost sunken beyond the ground. And the ceiling, it’s left precariously open as if someone forgot to put a roof and left a piece of glass there instead. Yuzuriha features the above stated difficulty of mastery, where certain formations of notes led to different effects. But compared to Hyde, the “main character”, the required spacing knowledge is vastly different. With Hyde mainly fitting the close to mid range for combat, Yuzuriha is able to cover all of them, leaning more to mid to long range. Whilst the obvious weapon design says all in that regard, this fighting game mentality can lead to somewhat infuriating moments of incapacitated helplessness. The variance is almost jarring in that regard, which some fighting games actively try to avoid. Which isn’t helped with the lack of a tutorial, that runs through each of the character movesets or even the basics of fighting games.

Is this the end of the world though? Definitely not (pun not intended). The core fighting mechanics aren’t lopsided to the point a person who’s slightly worse at this genre is guaranteed to lose. But it does bare mentioning that for game nights, those with more experienced are more likely to win. As this game isn’t about trading blows, it’s about savagely ripping the opponent into obliteration as you gloat using an ojou-sama laugh, hand covering mouth with your face turned slightly to the side.

Not quite a must buy, this is an easy recommendation nonetheless. Especially for those in the mood of a 2D Anime fighting game that isn’t Fighting Climax or other crossover fighting game. Obviously Arc System Works has their other iconic series, but this fighting game is up to snuff and definitely deserves a look. Even if the name reads like a weird out of the wood works isekai Light Novel.