Under the Jolly Roger Review

Wouldn't life as a pirate have been dull? Weeks on end with nothing to stare at but the endless ocean stretching out before you, the rotting timber of your ship and the increasingly jaundiced faces of your crewmates. As an honest depiction of the tedium of maritime life, Under the Jolly Roger is a spectacular triumph. Of course, this also means it's a spectacular bore, and no amount of pirate action, nor magical relics, mermaids or sea monsters can change that.

The game starts off slow, seeing you take on a rickety ship as captain and embarking with your small, scrappy crew across the open ocean. Don’t get too excited though: that one sentence gives the game’s characters more charm than the writing manages to. Your crew members are not at all significant; they're unnamed, will die constantly and can be replaced more easily than cheap pencils. You won’t feel any incentive to keep them alive, and you certainly won’t mourn their inevitable passing. 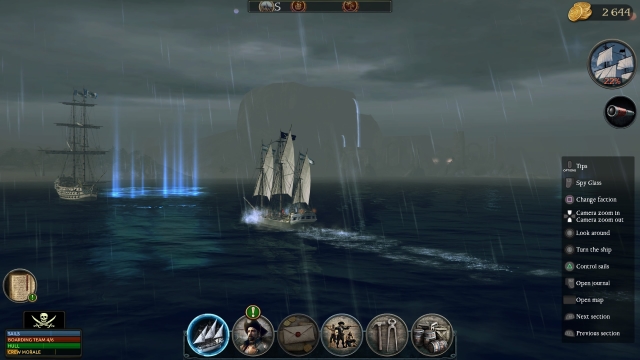 The opening missions serve to introduce the basics of maritime piracy, as well as the game’s semi-historically accurate open world setting. You see, while the bulk of the equipment and technology available to you is rooted in the 18th century—cannons, flintlock pistols, harpoons and such—there are also magical artefacts you can attach to your ship which grant it supernatural offensive or defensive capabilities during ship-on-ship combat (a highlight, of sorts). Think ‘projectiles hailing down from the sky’ and ‘force fields’ and you’ll be on the right lines. This fusion of history and fantasy could have been interesting, but in reality it simply feels forced. The fantastical elements of, say, Sea of Thieves work because the game’s entire presentation has been designed around it, but Under the Jolly Roger doesn’t pull off the same trick. It presents itself as a bland, mostly true-to-life historical game, but then throws some ghost ships and a kraken on top without attempting to justify it tonally. In the end, it feels silly and more than a little bit out of place, particularly when so much of the gameplay is tangled up in menus, management and mathematics. Oh yes, there's a fair amount of number crunching waiting for you as Captain; hopefully you packed your abacus. 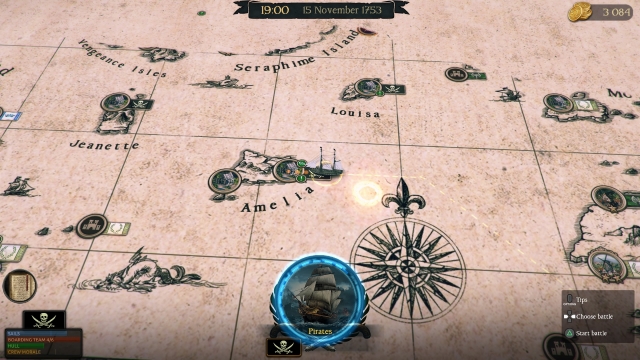 Those menus really are a tiresome affair. You’ll be jumping in and out of them with frustrating frequency, comparing ship stats, weighing up the potential profits of trading goods, assigning crew to various parts of the ship, slotting upgrades into the ship itself and more. While menus are a necessary part of almost every game, they’re frankly overwhelming here and majorly at odds with the spirit of high seas adventure Under the Jolly Roger wants to embody.

Things, sadly, only get slightly better when you move past the supernatural set dressing and menu drudgery to dig down into the action portion of the game. The core gameplay involves travelling across an open ocean from port to port, collecting missions, picking fights and trading goods in pursuit of increasingly powerful ships and weaponry. You can align yourself with one of a number of different factions, and you aren’t bound to this choice; you can swap allegiances at will, although it may take some time to build up reputation with a specific faction. Your allegiance isn’t that significant anyway, mostly determining who is hostile to you and where the most lucrative missions are found. 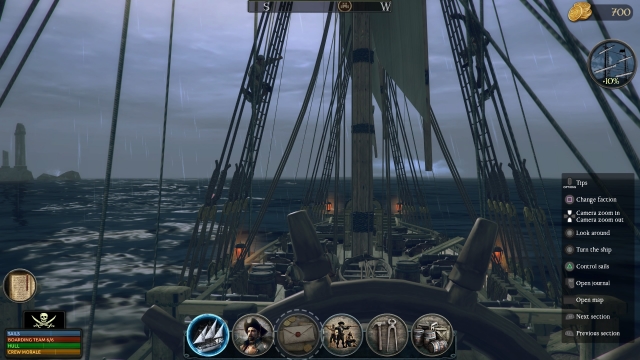 Speaking of which, missions in the game are abundant, but that’s not necessarily a good thing. At best, they serve as an excuse to venture out and throw yourself straight into some good old naval combat, maybe commandeering a vessel or two in the process (more on that later). At worst, they’re an exercise in patience, seeing you travel across all corners of the map, following breadcrumbs of uninspired text dump after text dump before being brushed off with a pitiful quest reward and the unshakable feeling that your time has been wasted.

It’s not even as if sailing, which makes up the bulk of your time, is enjoyable. When travelling, you can choose to sail in real-time, which is about as much fun as a washing machine's user manual, or through a sped-up fast travel system. This plots your progress across a full-screen map of the seas, highlighting points of interest and opportunities as you approach them. It’s vaguely reminiscent of the globe-trotting interludes in an Indiana Jones film, except without the excitement of adventure waiting on the other side. Neither of these methods are exactly snappy, but by avoiding the glacial real-time sailing mechanics, the latter wins out as the lesser of two evils. Honestly, in all but the most manoeuvrable of ships, sailing functions like it's trying to punish the player. Various upgrades and magical trinkets can improve matters to some extent, but the problem never fully goes away. I can accept that, as a game rooted in (some) historical accuracy, the ships couldn't have been rocket-powered speed machines, but surely some concessions could have been made in the name of fun. 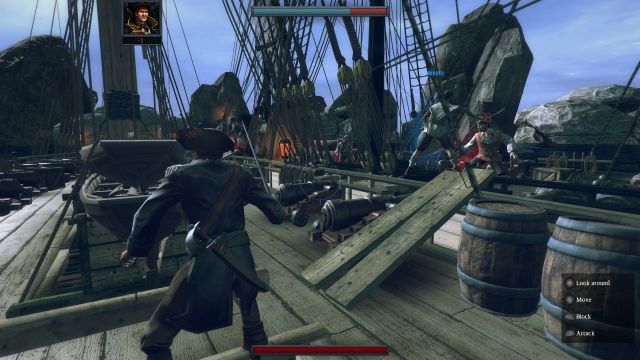 Unfortunately, there’s no workaround for the game’s agonisingly slow movement speed when it comes to ship combat. You'll spend more time getting in-range of enemy ships as you’ll spend actually fighting them. And if you should approach an enemy ship at a poor angle, expect to have a nightmare of a time realigning yourself. Despite this, combat is still where Under the Jolly Roger shines, relatively speaking. Every ship has three health bars, one for sails, one for the hull and one for the crew. You can load up your cannons with different ammo types which will impact each health bar to varying degrees. Want to destroy the hull? Bombs and regular cannonballs will do the trick. Trying to wipe out the crew? It’s shrapnel you’re after. What about those pesky sails? Split-shot cannon balls will take those right out. There are a range of special ammo types which offer damage bonuses and other effects, but these are the basics. 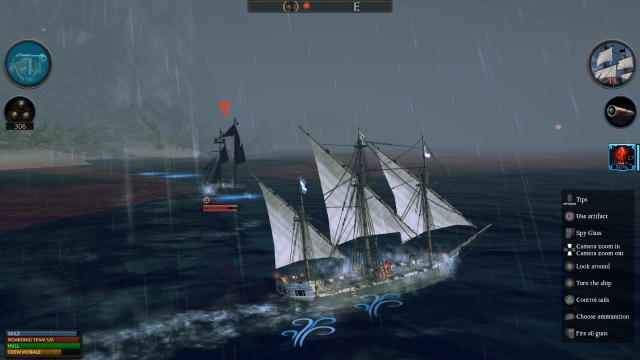 It’s this multi-ammo, multi-health bar system which gives the game’s combat some depth. By targeting the hull, you’ll be able to deal with the ship quickly, sinking it and leaving no survivors (and also minimal rewards). By targeting the sails, you’ll immobilise the ship, opening it up to boarding; this involves a third-person on-foot combat mini-game which, while slightly janky, is fairly satisfying. However, you’ll also want to soften up the enemy crew to make boarding an easier task, and to do this, you’ll first have to whittle down their collective health bar. It’s by far the most engaging aspect of the game. In addition to positioning yourself correctly to land all these shots (although a percentage chance counter makes the final call), you’ll also need to swap ammo types mid-battle to ensure you’re dealing the desired type of damage. This takes some time and therefore requires significant forethought. Selecting a particular ammo type should be a deliberate choice; doing so at the wrong time could leave your ship defenceless for a good 10 to 15 seconds.

As a complete package, Under the Jolly Roger is hard to recommend. It may offer entertaining ship battles, but these lack enough depth to compensate for every other aspect being a drawn-out slog. This poor overall impression is further hammered home by a handful of bugs, particularly during the tutorial. At one point my ship sank through the ocean floor without taking any damage, meaning that I was technically sailing underwater with no way to continue except to reboot the game. Another instance saw a tutorial quest failing to complete, meaning that I had no choice but to either skip the tutorial or restart the game (I chose the latter). These bugs admittedly petered off as I broke through the opening hours, but they were enough to paint a bad first impression which stuck with me throughout my time with the game.

Under the Jolly Roger (Reviewed on PlayStation 5)

Under the Jolly Roger is hard to recommend. It may offer entertaining ship battles, but these lack enough depth to compensate for every other aspect being a drawn-out slog. 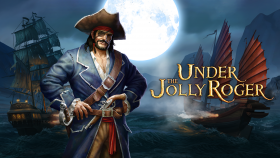 Under the Jolly Roger