Since its initial announcement two years ago, Untitled Goose Game had the internet in hysterics as its hilarious trailer promised to let you run amok as a lovable wretch of a goose out to ruin a groundskeeper’s day. Now that the game is finally out, does the same promise extend to a whole game or is it just a one-note joke?

The good news is that Untitled Goose Game (yes, Melbourne-based developer wisely just left the title as it is) is more than just making obnoxious honks. Although it is irresistible to keep pressing whether it’s to get someone’s attention or, in one case, scare someone off. Extended from the groundskeeper’s garden to a whole sleepy English village, which includes a shopping area, a residential area, and a pub, each location is in effect a sandbox for a series of comedy sketches to be played out. You can think of it like Metal Gear Solid or Hitman but with a relaxing sense of harmless tomfoolery rather than cold calculated violence, although even those games have an appreciation of slapstick comedy, which the Goose game runs riot with. 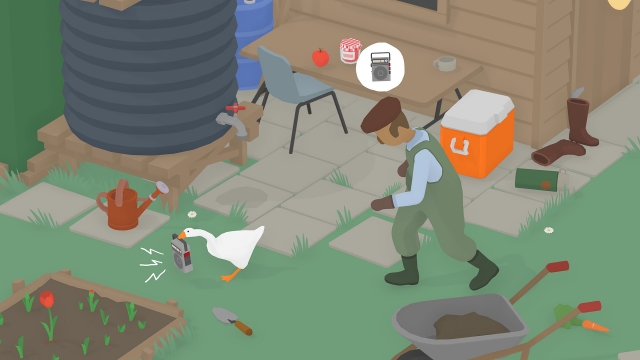 For each area, you’re basically given a checklist of things to do, some quite straightforward, others a bit more of a puzzle to set up, while ticking off all but one will trigger one new task that will allow you to progress to the next part of town. Ultimately, except maybe one instance, they all boil down to you being a goose terrorising the local villagers, which in any other context might make you a horrible bully if you weren’t such a lovable goose.

As well as making off with the groundskeeper’s hat or figuring out how to nick a boy’s glasses, some of the big punchlines involve mischievously playing NPCs against each other. Perhaps less interesting are tasks where you need to be able to nick a certain number of items to put in a specific place, which is a bit repetitive and mostly requires ferrying back and forth without getting caught by a meddling human (I mean, how dare they try and take back what was theirs). Because for all the light-stealth that’s available, the game’s at its best when you’re catching people’s attention and raising hell. And instead of MGS-style alert music, it’s a fitting piano rendition based on Debussy’s Préludes. 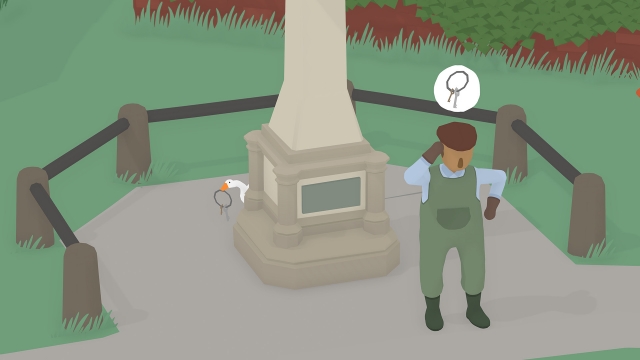 But while the punchlines get the desired belly laughs, pulling them off isn’t without frustrations. Partly it’s because your goose can be a bit fiddly to control it’s especially difficult to turn when you’re running (and you’ll probably be running a lot as you’re chased by very annoyed villagers). The same goes with picking up items as sometimes you’ll need to bend down to pick something up or if there’s multiple objects to interact with near you, you might pick up the wrong thing by mistake. If there’s a plus side, it’s that there’s similar limitations to the humans, as they can also only focus on one thing at a time. It means if you’re trying to get hold of an object in someone’s hand, it’s easy to just alert them by picking up something else, which then prompts them to drop what they have in their hands to go after you.

To elaborate more on the hijinks your goose can get up to would be spoiling things, especially considering that, at the end of the day, this is a pretty small village that should only take you a couple of hours to beat over a leisurely afternoon. In short, the game doesn’t outstay its welcome, although a post-game opens up more elaborate tasks that require traversing between different areas and there’s even a speedrun mode. I personally didn’t need any extras as the game really does succeed in what it sets out to do. Underneath its soothing pastel colours and relaxing piano music, it’s pure comedy gold that’s worth getting out on any occasion for a good laugh. And if nothing else, the honking doesn’t get old.

Untitled Goose Game is a short and sweet village sandbox of chaos, with probably the most laughs you’ll have in a videogame this year. Goose tier.

The Cult Of Goose

Goose of the year and Game of the year tbh. Easily the most entertaining game I've played all year, appeals to literally all ages and came out of nowhere. 10/10.