As the name suggests, the tracks are set in urban environments like scrap yards, but there are suburban tracks too. The vast majority of the levels have great detail and imagination, and you get a sense of how much time must have gone into developing this game. There are points where you might think you have fallen off the map, only to find the level continue further below. There are also platforms with springs that will catapult you elsewhere, as well as steep declines and dizzying tunnels. The game oozes imagination. 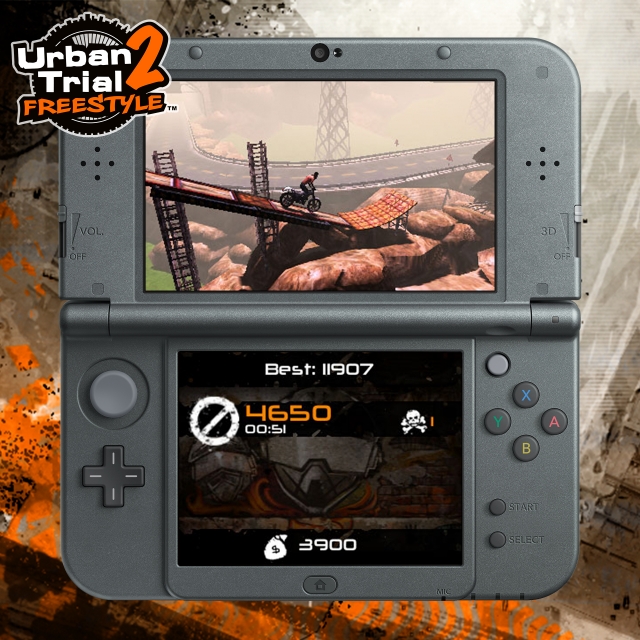 The only issue with the detail of each track is the difficulty of them. Maybe it was just me, but a lot of the tracks were really hard, and trying to obtain five stars was a task all in of itself. You’ll need an average of three starts in each location to move onto the more advanced levels. The good thing is that it is attainable, yet challenging all the same. But to contradict myself, a game that is challenging does feel more rewarding when your surpass the parts you were struggling on, and Urban Trial Freestyle 2 certainly makes you earn your stripes.

The buttons are very simple which makes the game easy to pick up for novices of the genre. Aside from the joystick, the four cursor buttons will control acceleration, braking, reversing, and resetting if you get stuck during a level. The joystick is very important when navigating your way through difficult terrains and fearsome heights, putting the correct weight on the front or rear of the bike accounts so much for getting through levels, rather than going for all out speed.

As is standard with these games, you can customise your character and bike, and although the customisations are somewhat limited, they are still good all the same. There is also a track creator, so you can build your own urban landscape and share it online. As is also standard with these game, and the soundtrack should be taken into account. In Urban Trial Freestyle 2, the soundtrack massively complements the style of the game, with high-paced and has a very stripped back and raw feel to it. 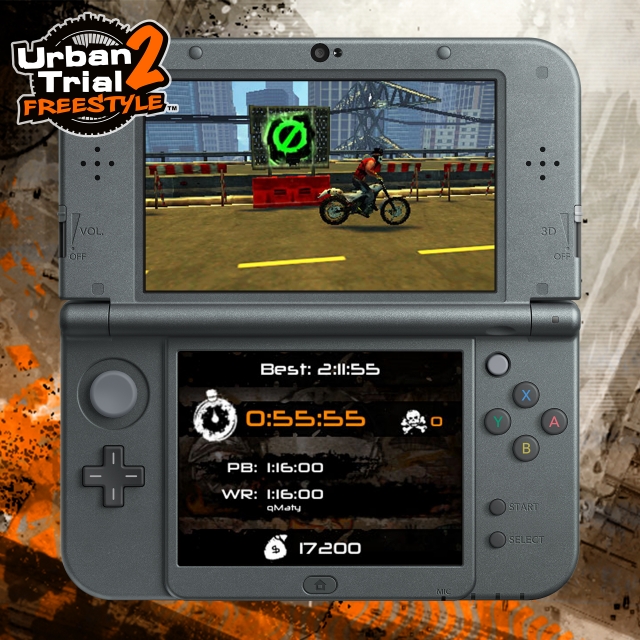 In terms of the customisation, you will acquire money by completing tracks and by how many stars you are awarded at the end. However, you can also earn money by hitting floating symbols as you go through each track. Some are harder to hit than others, and some of them you might hit with a touch of fortune - which I did on a number of occasions.
The cool thing about Urban Trial Freestyle 2 is that it isn't all about going as fast as possible, as you have room to adventure and find cool hidden areas, money for upgrades, and doing the customary stunts that make these kind of games so enjoyable.

But sometimes the enjoyment would turn into utter frustration when I was confronted by a floating or low-hanging platform that derailed the bike and made me start from the last checkpoint. It could be due to the fact it's on a handheld screen, but there were times where it was almost impossible to gauge what could be instantly ahead of you, and by the time you find out it could already be too late to react in time. For perfectionists who want to get through a level unscathed, it will most definitely provide an incentive, but for more casual players it's a bit of a stumbling block. Urban Trial Freestyle 2 is a very good game, with very few negatives, only minor gripes. The graphics look high end for the Nintendo 3DS, and the gameplay and depth to the game was more than I had expected. The ragdoll physics were as amusing as you'd expect, and the track creator was a fantastic addition. When you merge all that together, you get Urban Trial Freestyle 2 - a game that got me using my 3DS again!