Congratulations, your hard work has paid off! After years at the hero academy, and a very successful life post-education, you’re now the most qualified person to replace the retiring principal. As the new principal of this prodigious school, your first job is to name it. Wait, what? And why doesn’t this place have a roof?!

These and many more questions lay ahead of you in Valthirian Arc: Hero School Story. As you play this role playing game with school building and time management elements, you’ll quickly realise that the description sounds better than it actually is. 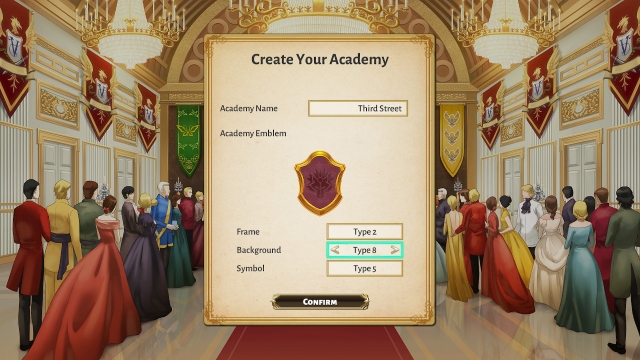 For reasons that make as much sense as Family Guy: The Quest for Stuff, you have to rebuild the school. You reach the school to find that there is one classroom and a couple of students, and basically nothing else. What happened to this, the biggest and best hero academy in the lands? Where are all of the students who were surely in-training before this term? Did you just get stiffed with an awful assignment? Shut up.

It’s hard to know what the main portion of Valthirian Arc is. I’d normally say it’s the action RPG portion, where you control a team of four students as they explore samey locations and kill enemies - but you don’t actually have to do that part yourself a lot of the time. So maybe it’s the city builder element? But no, there’s just not enough going on for that.

See, you take missions and either control the student team you send, or send them off on their own. If you control them, you can fight the various monsters, mine rocks or break barrels to collect materials required for the missions and crafting back at the school. If you send them alone, you have to wait a set amount of time (in-game days or weeks) for them to return. You can have multiple teams, so can complete multiple missions, but eventually the side-quests dry up and there’s no point in having more than one team. Once your students reach their maximum level (upgrade the school to raise the maximum level), they can be graduated which will give you a bunch of extra money - however, that leaves you with a weaker batch of students to choose from. 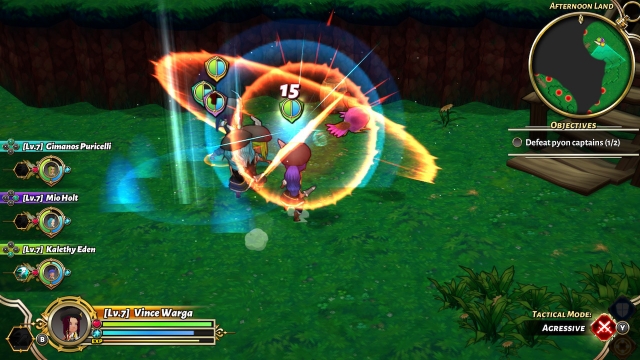 Fighting doesn't even look that flashy...

While in the school view, you move a cursor around to select the rooms you want, or press a button to select the menus, from there you can craft, build or induct new students. If there’s someone in a classroom with an icon over their head, you get to pick one of a few options - maybe a wallet was found which you can keep or return, or perhaps you can give the students a pop quiz. These icons last for only a few seconds, so this is where my main gripe with the game comes in.

The controls are slow and laggy, making you miss the aforementioned icons a lot. Oh, you say, but this is a review of the Switch version - surely they implemented touch-screen controls! No, they didn’t. The school stuff would be great if this was a tablet game - graphically it would suit it - but no, they made things awkward and not very accurate. Also, when you accept and finish quests, the Joy-Con vibrates at full strength, something I don’t recall experiencing often in other games.

The graphics in this game are hardly the most groundbreaking, but they’re perfectly serviceable. As I mentioned, the game wouldn’t look out of place on a tablet rather than on cutting edge consoles. It even has aspects of tablet games, with city building and waiting for timers to expire so you can do something. 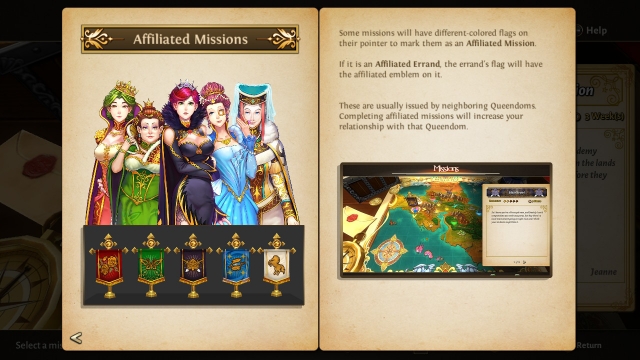 What are affiliated missions? It doesn't matter

If Valthirian Arc: Hero School Story was a premium tablet game, it would make a lot more sense than being a console title, especially since you could be left waiting for ages. Combat is simple enough for touch-screen controls, and the school section would have greatly benefited from them on the Switch version. It’s honestly a super lackluster game that tries to do too many things, and does none of them particularly badly, but also none of them are particularly inspired.

A very generic RPG with city building elements and a dodgy control system.

It could be an A+ game, but the name alone is a guarantee that this will be forgotten.

Talk about shooting yourself in the foot before you even begin the race. Want to be remembered? Go with a one or two word game name.  Never, ever go with Title: The Tale of Whatever as a game name. Think Doom, Minecraft, Overwatch, Fortnite, Diablo.

The only games that can get away with a title like that and still get noticed are the uber sellers, like The Elder Scrolls V: Skyrim.

Yeah, a game title with more than three words is usually going to be forgotten. The Elder Scrolls V: Skyrim gets away with it by being 1: part of a franchise, and 2: being known as Skyrim.