Virgo Versus The Zodiac Review

Indie RPGs can often be a mixed bag, either due to budget constraints or poor attempts to emulate classic games. Virgo Versus The Zodiac certainly starts off more positive than its competition, with a non-standard battle system and eye-catching 2D visuals. However, there are a couple of key areas that hold the game back from being a true success.

Virgo Versus The Zodiac takes place in a galaxy made up of various Zodiac Realms, each with their own Zodiac ruler. The titular Virgo is one of these Zodiacs, but she’s not happy with the current status quo. Spurred on by stories of the Golden Age, a time when the galaxy was supposedly a better place, she sets off to meet with the other Zodiacs. Intending to use their crowns to bring about the return of the Golden Age, Virgo is willing to do whatever is necessary to stop this current era of stagnation and heresy.

As you might be able to guess from the premise, Virgo isn’t a particularly heroic main character. She mows down inhabitants of each realm with little care, is willing to lie to get what she wants, and constantly brands anyone she doesn’t like as a heretic. Despite her murderous tendencies and interactions with a lot of the cast, most of the story is actually light-hearted. You’ll go from helping Virgo kill workers who just want fair treatment from their ruler, to watching comedic scenes with her sentient gingerbread man friend. 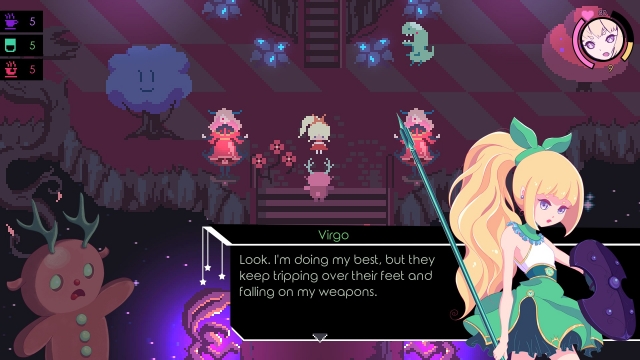 Honestly, I don’t think this combination of goofy antics with Virgo and the gang really meshes well with some of the more serious plot points. This is especially true for a couple of the endings that you can get, where their tone is wildly different from that of scenes happening less than an hour before. For one ending in particular, Virgo’s personality is all over the place. Part of this problem could be because of how the ending is decided, as one choice midway through the story locks you into the bad ending, even if you help out NPCs or spare enemies that you fight later.

Combat, as with most RPGs, is an integral focus of your journey through the Zodiac Realms. In Virgo Versus The Zodiac, however, these are quite different from the usual turn-based affair; when attacking and defending, you must react in real-time. This can range from timing your button presses, to inputting a sequence of directions. Correctly completing these QTEs will reward you with bonus damage or damage reduction. On top of this, the purity and counter system adds an extra layer to each battle. Purity acts as a shield for your hearts (health), and it allows you to perform a counter attack after being targeted.

Having this mixture of real-time elements and a counter system ensures that early fights are enjoyable, as there are a lot of decisions to be made even with only one party member. Weapons and armour also have much more importance than usual, as the skills you can use are tied to your equipment. Both attacking and countering have four skills each, separated into melee, ranged, AOE and guard. Skills are also one of three elements, meaning that certain skills will do more damage to enemies that are weak against that type of damage. Mixing up your equipment to have access to new sets of skills is a high point of Virgo Versus The Zodiac. It makes collecting a new weapon or piece of armour a bigger deal than just gaining a slight stat increase, and more RPGs should make use of this system. 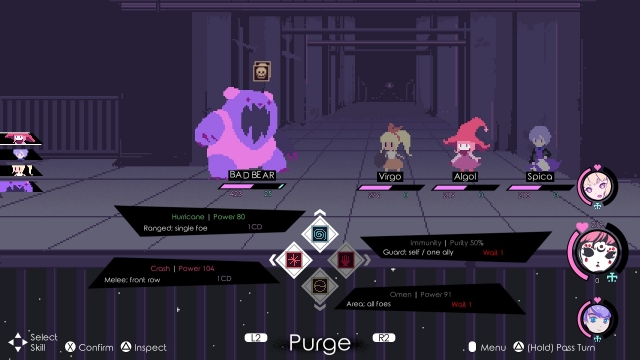 Battles are definitely fun to start with, so you’d think that the game would keep building upon them with new mechanics in later fights. Unfortunately, even with a few new types of QTEs later on, not a whole lot is added to stop battles from becoming stale. You run into the same attacks, and bosses rarely have their own unique mechanics. You’ll also start to completely overpower most enemies, and it got to the point where I completely ignored the element system. There are different difficulty options, though even this doesn’t change the fact that battles stop feeling fresh after a while.

Despite the problems I had with other aspects of Virgo Versus The Zodiac, its visuals and soundtrack are absolutely stellar. During exploration, the game takes on an old-school look. Simple character sprites combined with more detailed, but still quite retro, environments. It’s charming and has its own unique look, despite this style being used for many other indie RPGs, thanks to the vibrant colour palettes used for each of the zodiac realms. Battles also have a similar style, though these use larger sprites and look just as great. Character portraits are instead far more detailed and, combined with a more modern looking UI, create a clear contrast with the retro 2D spritework. It takes a few hours to get used to, though this clash of styles matches the chaotic nature of the game as a whole. The soundtrack also manages to match the wildly inconsistent tone of the story, and it’s by far the most impressive part of Virgo Versus the Zodiac. Impressively, the variety and number of tracks overall rivals some bigger budget RPGs.

Virgo Versus the Zodiac (Reviewed on Windows)

While Virgo Versus The Zodiac does have its moments, it loses steam the longer you play. The inconsistent tone gets in the way of any serious storytelling, and an initially engaging combat system ends up being underutilised. It’s still something worth checking out if you’re looking for a shorter RPG with some unique ideas, as long as you can put up with its shortcomings.

Virgo Versus the Zodiac Out Now For PC

I just can't help but picture John Virgo whilst reading this.

Virgo Versus the Zodiac