Waking is a journey through your dying mind, as you battle your way through your inner demons and the arbiters of fate that insist on guiding you to your final rest. It is a deeply introspective experience. It combines fighting your way through procedurally generated rogue-lite dungeons and mindfulness. It will invite you to reflect on how well you’ve lived your life and be a little bit emotionally vulnerable in the process. It will throw your personal problems and vices at you. But you will fight back - using cherished memories of loved ones and fonder times to battle your way through and finally awaken. Your dying mind can be a beautiful, horrifying, serene, and unnerving place.

The game establishes you as the player character – for reasons unknown to you, your dying mind is dreaming one last time. You spend the first hour of the game being gently led to eternal rest by Somnus – the ferryman to your afterlife, and ultimately the antagonist of the game. Suddenly, as you’re about to cross over death’s doorstep, a voice calls out to you – and urges you to reconsider, as it believes your time is not yet up. You will then spend the remainder of the game, healing your heart and mind from within, to try and escape your fate.

The story of Waking is likely one that you’ve heard before, albeit executed in a novel way. Somnus is a well-written villain; he’s not out to kill you for the sake of it. Rather, he is trying to save you from the negativity you’ve experienced in your life, as well as the potential trauma you could awaken to following your near-death experience. This makes him likeable – his motivations are in doing what he feels is best for you. While Somnus and his armies start off gentle and understanding of you, the closer you get to your goal – the more aggressive they will become. They won’t shy away from throwing your faults and misdeeds in your face later in the game. 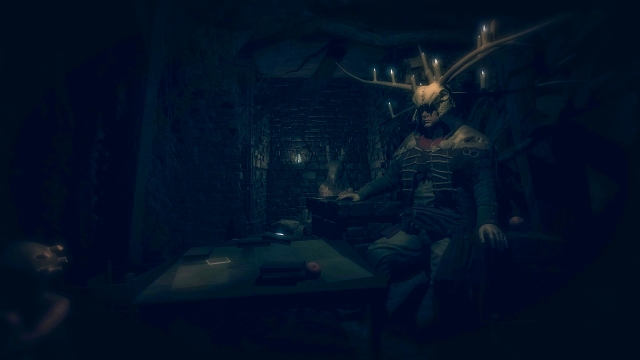 Somnus wants you to leave the pain of your life behind, and gently lead you to eternal rest.

You will spend the bulk of your 20-odd hours with Waking battling your way through its procedurally generated dungeons and fighting bosses in pursuit of the 12 pages of the Book of Somnus, which you need to collect in order to awaken. The game utilises three primary methods of engaging your enemies – knowledge (projectiles), feelings (melee), and beliefs (shields). Outside of the most basic enemies, the game requires you to stun your opponents with projectiles before you can attempt melee combat. While in most one-on-one engagements fighting feels great, in more crowded battles the targeting system tends to let you down, even if you’re looking directly at the enemy you wish to attack. For a game which is hugely reliant on throwing projectiles, it was a little disheartening to die multiple times to the enemy that was right in my face, because my reticle decided to focus on another grunt on the opposite end of the room.

The game also punishes you severely for even taking a hit. A system called ‘Fear’ will increase the difficulty of your enemies as you either progress through the level or take damage. Players can reduce this ‘Fear’ stat in several ways, including increasing your ‘Hope’ stat. ‘Hope’ is a reward system for defeating enemies without getting hit, and will allow you to break open boxes with powerups, key items, as well as reduce your ‘Fear’ stat. All ‘Hope’ is lost, however, the moment you take a hit. 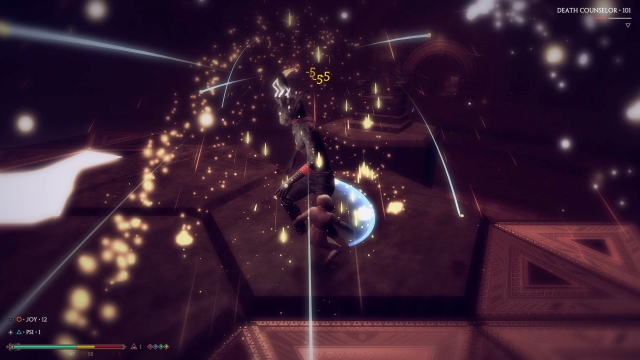 The combat in Waking can be fun and frantic, as long as the imperfect targeting system doesn't let you down.

The game offers a generous variety of levels as you traverse the game’s three ‘mindscapes’ – the maps for the different sections of your mind you will fight through. There are objective-based, procedurally generated dungeons which culminate in boss fights, as well as set narrative-driving levels. On top of that, there are combat arena levels, escape rooms, and just straight-up massive boss fights. Most often, you’ll find yourself moving through the dungeons, preferably slowly and calculated, to buff yourself up as much as possible for the boss fight that is waiting for you at the end.

Following these often-nail-biting levels, you will be invited by the unnamed ‘guardian angel’ character to close your eyes and reflect upon your life. Pets, regrets, loved ones, where you consider home, your passions, almost nothing is off the table for these guided meditation sessions. I’ll admit that I could feel some tears welling behind my closed eyelids during some of these sessions, recalling memories of loved ones lost and simpler times.
These moments of quiet reflection feel rewarding, as they're a nice contrast to the blood-pumping boss encounter you may have just completed. After opening your eyes, the game will then ask you to input information about what you just recalled, and you will gain new attributes and abilities. As an example, growing up, I had a cat named Kicia. Kicia became a summon for me who could defend me and search for hidden passages.

Disclaimer: Waking has a chance of bringing out some emotional trauma in the player, and the game even explicitly states this when you begin a new save. If you struggle with severe mental health issues, approach this game with caution. 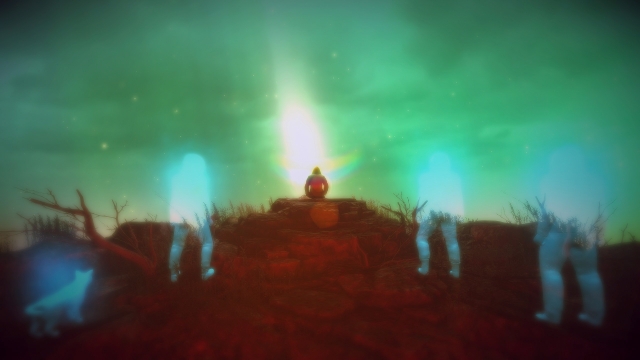 From left to right: Kicia (my cat), Henryk (my father), Me, Dylan (my oldest friend), and Eric (another one my closest friends).

Overall, the gameplay loop of Waking is enjoyable. I found it a little overwhelming initially, as the game will throw a lot of information at you early on and the combat systems are somewhat complicated. Despite being a game which asks you to reflect on the emotions experienced throughout your life, this game isn’t as approachable to a casual gamer. At its core, Waking is a rogue-lite. Depending on your difficulty setting, you will die, a lot. Most of these deaths will be fair, but you may also die a few times from a less than ideal projectile targeting system and brutal procedurally generated spawns.

Visually, Waking isn’t ground-breaking. The draw distance is quite short, character models are very static, and your movement animation takes a second to catch up now and again. However, considering its indie status and that this game was created almost solely by Jason Oda, it looks great. The art style and the environments serve the purpose of the game nicely. It performed admirably on PC, with few frame drops and hiccups. The soundtrack is fantastic. The rolling orchestral themes that occupy the overworld and guided meditation sessions complement the serene moments exceptionally. Boss music is upbeat and memorable, and you can also notice the soundtrack change depending on your Fear level. The only voice-acted role in the game is also well performed and mixed. Hearing the soothing voice of the guide asking me to close my eyes and reflect is always incredibly welcoming.

I can’t sing praises for the games UI, however. Equipping abilities, applying buffs, checking your inventory, and gameplay tips are all crammed into a single vertical menu. When you get towards the late-game, you’ll have amassed many personal memories, treasured objects and summons. You’ll find yourself in the pause menu for a fair bit longer than you should because you’re trying to dig your way down this single long list. Additionally, if you’re playing at a higher difficulty and may be looking to reset levels often, you’ll find that load times are a little tedious as the game requires you to load back into the hub world before trying again.

Waking is a game that attempts to be two very different things, and for the most part, it succeeds quite well. If you’re willing to devote a little bit of time to learning its quirky systems, you’re in for a potentially rewarding experience. An experience which encourages you to close your eyes, take a deep breath, and go back into your memories.