Warden: Melody of the Undergrowth Review

Warden: Melody of the Undergrowth is a little bit like the well-known film Me, Myself and Irene. The game spends most of its time trying to decide whether it is The Legend of Zelda: Ocarina of Time, Banjo Kazooie or Super Mario 64. This dedication to the N64 is obvious through the game’s visual style, along with the fact the developers state that it is “Inspired by genre classics of the N64 era” on the Steam page for the title.

The story is a tale of a young boy who ends up separated from his father: upon trying to return to him he ends up embroiled in an ancient quest involving magic and spirits. During the quest, the protagonist ends up meeting two other heroes he must work with. Controlling all three, the player must make their way through the world and it’s narrative, overcoming various challenges and puzzles.

The game is a mix of platforming and combat, it features a system that is similar to Z-Targeting, a mechanic from The Legend Of Zelda that enables players to lock onto individual enemies, but this is the rubbish poundshop equivalent, due to the awkward controls. This in turn directly affects the platforming, making it feel unintuitive. I’m not sure if this is down to it being developed in Unity or just a general lack of polish on behalf of the developers. It makes the game a chore at times, especially when the protagonist ends up stuck in a piece of scenery.

The game does do a great job of imitating the general aesthetic and atmosphere of the N64 era of games. The world is bright and vibrant, filled with unusual but welcoming characters. The music is simple, but catchy like many soundtracks during the late ‘90s. The developers have clearly made an effort to nail every aspect of the N64 era, which some might love, but I find a little too regressive.

Progression in Warden: Melody of the Undergrowth is often awkward, goals and objectives aren’t always clear - in true N64 style you will often end up stumbling into the right way forward. A few objectives involved me crouching in order to enter a small hole, but the game decided to place an invisible wall in front of it for some reason, so I ended up walking around for ages trying to figure out where I had to go. Upon reloading the next day, I came back to this small hole, the invisible wall had disappeared and I was able to progress. This kind of thing happens far too often, and ends up turning the game’s progression into a chore. Ocarina of Time always had a feeling of natural progression, I never found myself tiring because it wasn’t impossible to find where the next temple was.

This is my biggest problem with Warden: Melody of the Undergrowth, the developers claim to be inspired by the classics of the N64, but they do a really poor job of emulating them in this current state. Games like The Legend of Zelda: Ocarina of Time and Banjo Kazooie were well designed. They had a genuine element of prestige to them because Nintendo look over their big IPs like prize hens. Warden does not have this kind of prestige, and feels incredibly flimsy by comparison. 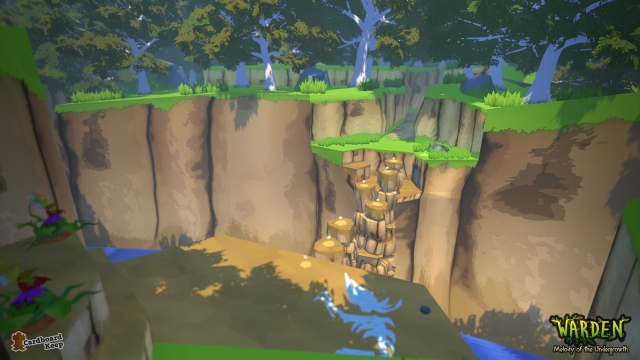 The ambition is there, and the developers clearly had a great concept to begin with, one I believe could still be salvaged given enough updates. But the game is currently too buggy and awkward to recommend. I often find myself getting stuck in corners, or clipping through an enemy's hitbox and ending up stood on top of their heads like some weirdly acrobatic show off. I would love to say these moments are very rare, but they really aren’t.
I really wanted Warden: Melody of the Undergrowth to be something special, upon seeing the obvious Zelda influences I was instantly excited at the prospect of seeing what a developer could do with those influences. Instead I was met with a title that was aesthetically pleasing, but lacked the polished gameplay of its predecessors.

As it stands, Warden: Melody of the Undergrowth is a disappointing game that lacks the prestige of the games it is trying to emulate. The story and lore have been given a lot of hard work, and wouldn’t look out of place in the Zelda universe, unfortunately the gameplay itself is nowhere near as accessible and fluid. I’m surprised the title is a full release, as it genuinely feels like an Early Access title. A little bit more work would help smooth out the controls and make progression more natural, but until then I would definitely avoid.

Warden: Melody of the Undergrowth promises a lot with it's homage to the N64 era of action-adventure games, unfortunately it falls short of the prestige associated with that era. What we're left with is a clunky game that glitches quite regularly, there's still potential in the future, but the game needs a lot of issues fixing.