After releasing on PC back in late 2018 Warhammer 40,000: Mechanicus has finally come to consoles and includes some DLC that has been released for the PC version, does this game translate well to consoles after having mouse and keyboard controls?

Warhammer 40,000: Mechanicus is a real-time strategy game similar to games like XCOM. You will spend most of your time in this title controlling your soldiers and moving them around squares until they finally kill an enemy. This would be great if the AI actually put up a fight, the enemy AI in this title are essentially brain dead and will not pose a threat to you at all in the length of the 15 - 20 hour campaign. It is worth noting that while I was playing this game I was using the normal difficulty, however it really does feel like it is too easy and my enjoyment of the game was hindered greatly by this. 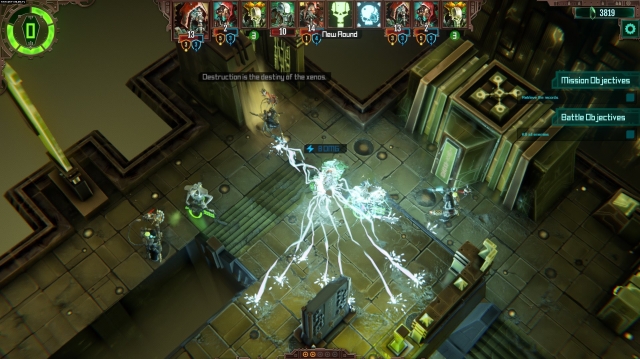 The story has you picking up a strange signal from the planet Silva Tenebris, you then send a team of tech priests to investigate and find that the planet is overwhelmed with Necrons, Skeletons who don’t want to stay dead and want to murder you with their weapons. The Necrons’ ability to regenerate becomes the focus of the entire campaign, which leads to you exploring a huge network of deadly tombs under Silva Tenebris and killing every last Necron on the planet.

There are ways of upgrading your crew as you fight through the relentless hordes of Necrons and you do this by heading to the control room, from here you can improve your priests using resources and equipment you find on missions. There are six different upgrade trees which don't confine you to one path; you can upgrade from each tree as you see fit.

When you are going through missions you essentially choose where you will go on your path as you follow the map, you then get a series of options in special rooms. In one instance I found a room full of gems and it gave me the options of destroying them, selling them or avoiding them completely. The game is scattered with choices like this and it does give you a change of scenery from just killing Necrons.

Tech trees are essentially the reason why this game gets so easy early into the game, if you choose the right abilities early enough you are overpowered and the enemies stand no chance. I did this by putting all of my early skills in CP generating perks and free heavy weapon shots. This meant that I was able to clear a room of enemies before they had even had the chance to attack me most of the time. 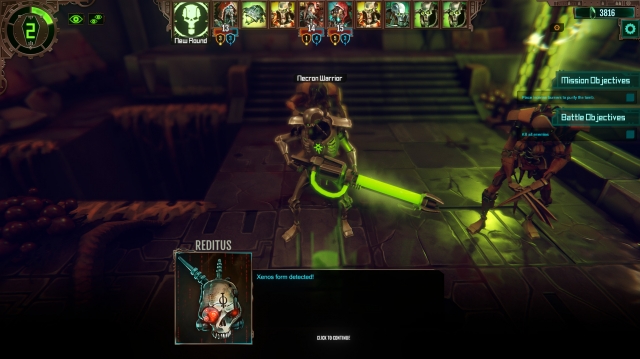 Let’s talk about controls, so as this was a PC game, you can imagine the controls may not have translated well to consoles. Well after completing the campaign I am happy to say that with a PlayStation 4 controller the game feels as good as mouse and keyboard and most of the attacks are done using a combination of buttons due to the lack of buttons on the controller. Overall I would say that the controls aren’t that bad and that you shouldn’t have this as a concern coming into this title.

The enemy variety is a plus in this game, there are a few enemy types and each has their own different abilities and weapons to mix up gameplay and offer something different even if you can kill them with ease. There are also several support units that you can unlock during the campaign that change the way that you could handle rooms.

Warhammer 40,000: Mechanicus was developed by Bulwark Studios and published by Kasedo Games and is finally available on Xbox One and PlayStation 4 now.

Warhammer 40,000: Mechanicus is a fun title but the main issues from the PC version are still very much present on the console version and it seriously hindered my enjoyment of the game. n.