First released in May 2019 for consoles and PC, Warhammer: Chaosbane returns to the next-gen with its updated Slayer Edition. This edition of Warhammer: Chaosban contains the base game experience, the two DLC chapters and updated visuals and performance tweaks that take advantage of the new generation’s hardware.

The performance tweaks are noticeable from the get-go. Regardless of how chaotic the screen becomes, the game maintains a smooth 60FPS. The harder difficulties are able to throw more at the player too. Updating to 4K really shows the details of the game's background too. I found the original version of the game had scenery that felt bland at times, however the updated resolutions and graphical tweaks really help a once dull scenery shine. Despite those tweaks, the game's scenery does feel repetitive - only it’s prettier now. 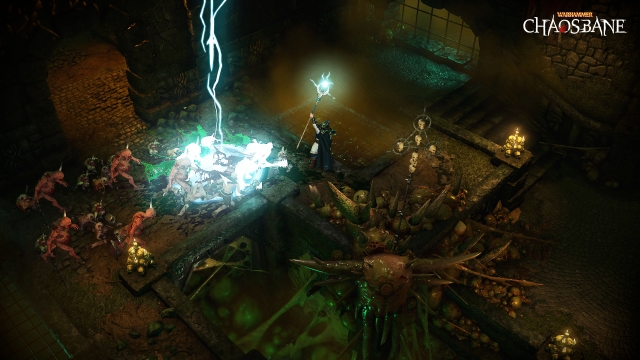 Even with the graphical tweaks and more vibrant colour scheme, the game world does lack that spark. There’s intrigue there, but a lot of that comes from the game's writing rather than art design. The visuals are good, but remain uninspiring. The newer armour and weapon varieties are great however, especially the former. There’s a lot more diversity in both design and colour, really allowing for unique playthroughs of the game. Top tier armour looks great, which at times feels like a lost art in games where equipment affects your level. By the end of my playthrough with Warhammer: Chaosbane Slayer Edition, I looked and felt powerful.

Unfortunately, aesthetic is about as good as it gets when it comes to the loot. Despite some great design work for later game gear, a huge chunk of the game involves swapping in similar pieces for small stat buffs. At times, it feels as if you can go an hour or two before finding a substantial upgrade. It’s certainly a disappointment, considering the genre, to have such an uninteresting loot cycle dominate the early and mid parts of the game. It squashes the excitement of looting and renders the process of stat balancing useless. Rather than pondering which items give the best stat increase for your class, you end up picking the one with the most green numbers. Even then, the increase isn’t substantial enough to notice.

Demolishing enemies is a delight, with players now being able to vanquish evil things at a very smooth 60FPS. The game doesn’t stutter, no matter how intense the action gets, allowing for fluid gameplay throughout. At just 10 hours long, one campaign is pretty short, but it does allow for you to hop in and out of new characters to give them all a try. There’s a new class added in addition to those returning from the base game, Witch Hunter. All the classes are enjoyable to play, with each one bringing a unique gameplay style to the board.

Warhammer: Chaosbane Slayer Edition does a good job of being accessible to those with little to no knowledge of the franchise. It builds the world for you, allowing newer audiences to understand the context of everything that’s going on. Of course there’s plenty there for older fans to enjoy too, the writing does a fantastic job providing more of the same, whilst being able to ease in the players. It’s a difficult task to undertake, yet it was handled extremely well. Creatively, there is a cost, as the game swerves sharply into a generic fantasy story from time to time. 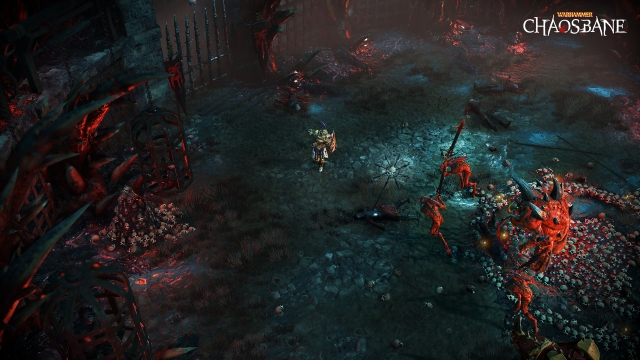 Compared to other games of the genre, the gameplay can become repetitive after a few hours of play. Even with the difficulty turned up, Warhammer: Chaosbane Slayer Edition isn’t a game you’re likely to find very difficult. Enemy variety has increased from what the base game contained, but it doesn’t quash the feeling you’re slogging through hordes of mindless enemies. With a game that feels too easy to play, enemy variety doesn’t really mean much to the player. There is a satisfying feeling when massacring the hordes of evil critters. Unfortunately, that feeling is replaced with boredom as you mindlessly cut enemies down as you charge through to the next story point. It’s a gameplay loop that could be endlessly enjoyable, if the game would just turn up the difficulty notch a tad.

Ultimately, Warhammer: Chaosbane Slayer Edition takes advantage of the new console hardware to both look and perform better than the games base console version. Despite this, the game suffers from repetitive scenery, before devolving into a generic fantasy story. That generic fantasy story definitely makes the game more accessible for non-Warhammer fans, but long time followers are likely to be disappointed. You’re likely to burn through content too. Even with the added enemies and DLC levels, the game still feels far too easy, even on the higher difficulties.

Warhammer: Chaosbane Slayer Edition is an improvement on the base game from last generation, but never truly feels like a next gen title. The added content will make this a worthy upgrade for those who enjoyed the base game, however the game remains too generic in terms of story and far too easy when it comes to gameplay. 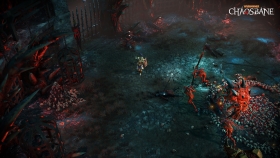