The world is coming to an end, hordes of rat-men are rampaging across the land unchallenged, their victory seemingly absolute. Warhammer: Vermintide 2 focuses on a small band of unlikely heroes who were able to repel the Skaven forces and protect the city of Ubersreik. Despite that victory the heroes were captured and without them the city finally fell. Now they must free themselves and mount a counter-offensive to send the Skaven clans into disarray and break their ties with the Northmen of Chaos. The game is an action packed, first-person gorefest that pits the player against hordes of monstrous Skaven, viking-inspired Northmen and Chaos demons that have more limbs than any living creature should have.

There are five returning characters from the first game available for play, each with three career choices that change their passive, special abilities, and talents. Each character starts with a beginner career and the rest can be unlocked by leveling that character. First up you have Markus Kruber, the gruff mercenary, armed with the ability to cleave through more enemies than other characters and a special ability that buffs teammates health and knocks nearby enemies down. This makes him best suited to the front lines, carving a path for everyone to follow. Baradin Goreksson, the Dwarven Ranger who sings in the face of danger, specialises in scavenging for ammo from fallen foes and his unique ability is a smoke bomb that removes him from combat and conceals him for a short period of time. Kerillian is the sassy-mouthed Waystalker, she is able to regenerate health over time and her special ability fires a volley of arrows that will seek out enemies. Victor Saltzpyre, the Witch Hunter, is always composed no matter the odds and he handles everything with finesse. Able to instantly kill man-sized enemies with a headshot and buff the entire group with increased critical hit chance using his special, he is invaluable at removing dangerous threats quickly. To finish the roster is Sienna Fuegonasus, the pyromaniac Wizard that, in my opinion, is the most unique character out of the group. Unlike other ranged characters she does not use ammo but instead she must manage her heat level, if she gets too hot she will explode and fall into a downed state, requiring revival by a team member. Her special ability is fire-walk: Blinking forward and leaving a trail of fire in her wake. 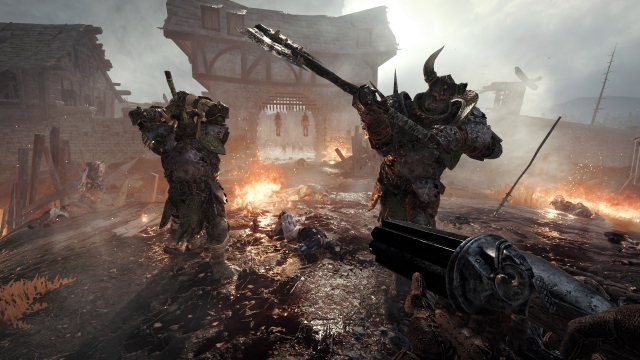 Each career fits a general archetype, Markus being the front-line tank and Kerillian being a damager dealer. The unlockable career paths change the archetype of each character and how they play without losing the characters theme. The Handmaiden career path for Kerillian changes her focus from a ranged character to a melee. Utilising polearm weapons and taking a front line approach, yet remaining mobile with bonuses to her dodge and still being able to unleash ranged weapons for hit and run tactics. This means that every player can pick their favourite character without worrying so much about if that character fits with their playstyle or not. Unlocking all three careers for each character will take some time investment. I found that focusing on leveling a single character that it is possible to at least unlock their second career in the matter of a few hours of play.

One of the features that sets this game apart from other similar titles is the variety of enemies to do battle with. Enemies can be broken down into five distinct categories. Horde-type enemies can often be killed with a single blow and as the name suggests come in large numbers. Armoured enemies require heavier weapons, charged attacks or well placed headshots to deal damage to. Berserkers are enemies that are able to deal a ton of damage very quickly. There are also special enemy types that are able to easily incapacitate a friendly player or specialise in dealing high damage with unique weapons such as the Packmaster who captures a player and attempts to drag them away or the Ratling Gunner and his high powered minigun. Finally, there are Boss types who have high health and high damage output. Just one of these bosses is able to put a stop to an entire team of players and each need to be dealt with in their own unique way. This is what gives Vermintide 2 its replayability. The different combinations of enemies that can be thrown at the players at any given time to create unique situations and new challenges to overcome is extremely satisfying.

There are three acts with a total of 13 missions to complete, each with their own overarching story and objective to complete that build up to an explosive finale. There are a variety of environments to explore, from destroyed cities to lush green forests and deep dark mining caves, meaning there is always something new and exciting to see and battle through. With alternative routes scattered throughout each mission there are a number of ways to traverse each. While these paths don’t stray too far from one another they often offer high ground or a way to avoid a group of enemies, meaning an organised group of players can utilise this to their advantage and with the difficulty that Vermintide 2 presents it is at times necessary.

I was a little disappointed to discover that the difficulty in the game does not scale smoothly, instead each new difficulty level comes in the form of a wall that once scaled becomes all too easy. The mixture of a loot system that provides better loot per difficulty level means that new players will be challenged the most while veteran players will easily breeze through the later levels until they move up a difficulty level and the process repeats. This system creates three stages of playing Vermintide 2, the first being nearly impossible to complete a single mission, the sweet-spot where the player has gathered enough loot for the game to be challenging and then finally the player is largely overpowered for the difficulty and everything is too easy. Thankfully loot is easy to come by and anything that is of no use can be broken down into its base crafting ingredients that can be used to upgrade, reroll stats, or create a new item with. Each character can use a multitude of different weapons, even the quick footed Kerillian can heft a large glaive or two handed sword. This adds another layer of depth to the character customisation, offering players greater control over their playstyle for each character.

FatShark has done a fantastic job of taking their first game and improving on every single aspect. The recurring theme of offering players a variety of tools, characters and enemies to face leads to a crescendo of unique moments that are all entirely player driven. While the difficulty spikes can be frustrating, part of the fun in Vermintide 2 is being against the odds and prevailing.

FatShark has done a fantastic job of taking their first game and improving on every single aspect. The recurring theme of offering players a variety of tools, characters and enemies to face leads to a crescendo of unique moments that are all entirely player driven. While the difficulty spikes can be frustrating, part of the fun in Vermintide 2 is being against the odds and prevailing.

Warhammer: Vermintide 2's Time-Exclusive Level is Only Available for a Few More Days