The latest game in the Watch_Dogs franchise is here, and I was excited to review it. I’ve been a fan since the first and definitely enjoyed running around the sequel and hacking people’s online banking via their phones. Ubisoft made quite a few changes to things for Watch Dogs: Legion, though.

As soon as you load up Watch Dogs: Legion and mess with the settings, if you’re anything like me, you’ll come across an option for text-to-speech, which reads the menu elements to you. I chose to see what this was like, but I quickly switched it back off again, due to the voice going on and on reading out whatever you scrolled over. Useful for some people but not for me.

Once finishing with the settings and selecting to start the game, it asked if I wanted permadeath, which means if your operative dies they are gone forever, and if all your operatives die that means the game is at an end. I did not select this option, because it did sound interesting at first, but I also wanted to play the game to enjoy it. Permadeath would have just stressed me out.

You start the game controlling a spy named Dalton, who breaks into the Houses of Parliament for the hacker group Dedsec. Things happen, and suddenly explosions rock London, with the country blaming Dedsec for the multiple bombings. Cut to some time later, Dedsec is hanging on by a thread, and it's up to you to put it back together and prove their innocence. Unfortunately, that's made harder by Albion, the security force which has taken over policing the city.

After finishing playing as Dalton for the opening, you select your very first operative from a random selection. I just chose the first one on the list (Michelle Moss), and while I was at it, I thought it would be fun to make an all-girl team. In case you were wondering, yes, that’s entirely possible, and the only guy I recruited was by accident when I was trying to drink a beer.

Watch Dogs: Legion lets you recruit almost anyone you see in London. For example, if you need a construction worker, because they’re good with drones, then pick anyone you want from the building site. Then you have to do a little mission for them, such as rescue a loved one, or steal something for them. Each occupation has its benefits, and you may have to go to other boroughs of London to find a specific one. 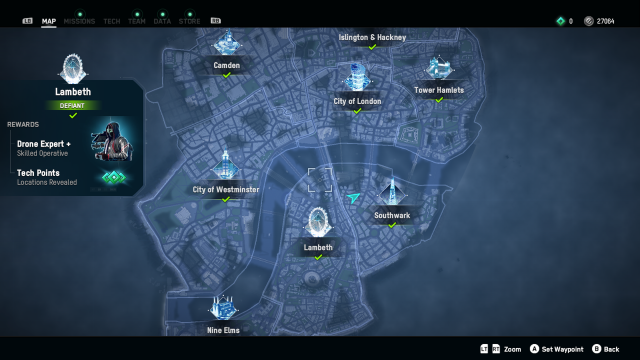 Since not everyone likes Dedsec, you might be surprised to know that you can still recruit them. You have to put a lot more work into it but it’s possible. Of course, since they hate you, they might kidnap your operative, and you’ll be unable to use them again until you’ve rescued them.

Helping you along the way is an AI called Bagley, who is voiced by Pascal Langdale. He’s one of the few characters that your team will all interact with throughout the game. Sometimes, he can be a little annoying, and other times he can be very charming and funny.

If you’re exploring London and don’t fancy doing a mission, you can go around looking for side activities on the map. Things like kick-ups (AKA keepie-uppies) which have you standing in the middle of a grassy area kicking a ball up in the air for as long as you can, by pressing buttons in time. Or, you can go and be a delivery person, like Amazon, and deliver parcels for Parcel Fox. The idea is to deliver a parcel from A to B, some deliveries could be timed and you’ll have to drive carefully with very minimal damage, other deliveries you can take your time getting to your destination. Be aware that Albion might be after you because of what’s in the box! The final activity, the thing I don’t think I need to explain, is bare-knuckle boxing. 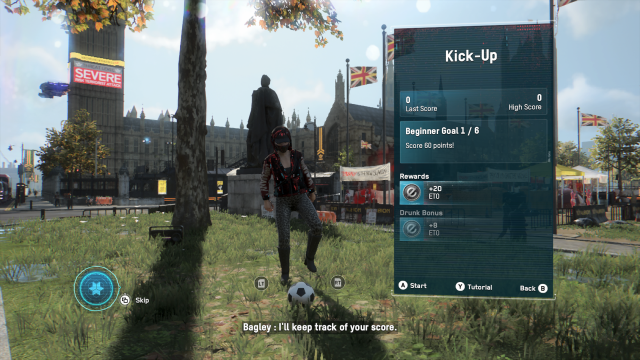 Another activity you can also do while exploring London is nip into a pub, there are plenty around and yes, you can get drunk. So drunk that you can pass out and have to swap to another member of your team! But don't just get drunk, you can play darts for ETO (which is what money is called). 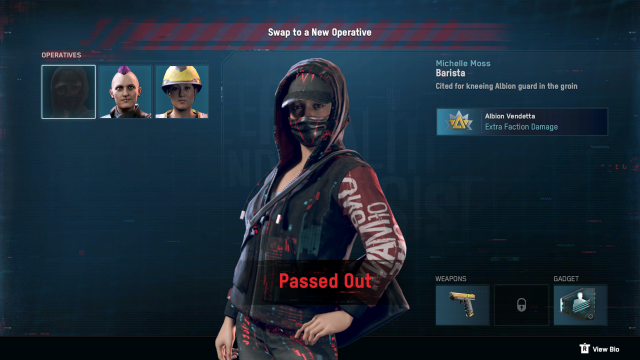 One thing they brought over from Watch_Dogs 2 was paste-up, which used to be called graffiti. You put up posters in certain spots around London for rewards, the more you put up, the more you unlock and get to choose different posters.

Unfortunately, what they didn’t bring over from Watch_Dogs 2 is the lip synching. In the first two games it was fine, but the most annoying area of the game are the in-game cutscenes, because you can clearly see that it has awful lip sync. This could be because of how everyone has a randomly selected face and a voice, but it’s distracting with how bad it is - even for the story characters.

Actually, I know I said that was the most annoying thing, but the main reason for my score are the random crashes on Xbox One S. Either right at the start while loading up Watch Dogs: Legion, or after playing for anytime from an hour to three hours, with nothing obvious triggering it. I could understand if at some point it glitched out, but to crash while driving or in mid-mission can be frustrating to the point where I wanted to throw the console out the window. After playing 30-plus-hours, yep just 30-plus-hours, I came to the conclusion that I had about enough. I do go back to it now and again, but my mood isn't where I really want to play Watch Dogs: Legion. Don't get me wrong, it's an amazing game, the graphics are perfect, sightseeing around London is great and the story is interesting, but with so many crashes, it makes me not really enjoy playing. I’ve heard that the PC version manages to have no crashes or any other issues that the console is having.

Since the new Xbox Series X has just come out, I also tried it on there, and it was a dream come true. It had no crashes and it ran as smoothly as it should have, but sadly didn't on the One S. One issue on the Xbox Series X, however, it was where it wasn't saving. I switched the game off to go eat or sleep, and the next time I was on I had to repeat a handful of missions all over again, which was very annoying after spending so many hours completing them.

Watch Dogs: Legion has a lot of good qualities going for it, even the remote-controlled Spiderbot which replaces the Quadcopter and RC Jumper from Watch_Dogs 2, but I can’t overlook the crashes & save issues. There’s fun to be had here but when the game won’t work, or doesn’t save four hours of progress, it’s difficult to actually have that fun. Ubisoft has said there is more content coming to the single-player, and a new multiplayer mode also coming, so you might want to wait until that’s all out to pick this up. 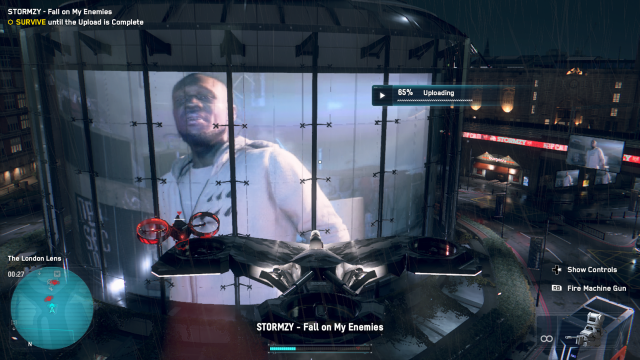 Ubisoft have done well with this game but if you get frustrated easily I would maybe wait till this game has had a few more updates first before playing it.

Nice review, gonna pick this up in a sale I think :) 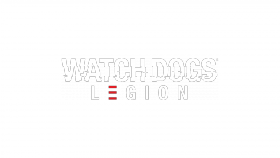