We Are The Dwarves Review

We Are The Dwarves is a game that takes pleasure in watching you fail. With every misstep taken it's not hard to imagine the developers cackling in a high-backed chair, lightning striking overhead. Placing you in control of three Dwarven explorers stuck on an alien world, We Are The Dwarves is an action-based strategy game played from an elevated perspective in a 3D world – think Diablo meets The Lost Vikings.

You’re plonked into the story being told that Dwarven stars are dying, necessitating the launching of explorers out into the galaxy in order to find a new star system capable of stopping the extinction of the entire race. The space-punk twist that developers Whale Rock Games have given the title is refreshing, even if it’s a strange experience to see a Dwarf in a space-suit.

The three pint-sized heroes you have at your disposal are the shotgun-toting Forcer, who can knock enemies back with area-specific attacks; Smashfist, who dual wields handaxes and unleashes a rage mode on foes, and they are joined by more mysterious Shadow, the group’s spy-cum-assassin, who can take cover and teleport across the map. Each has their own specific skill tree, allowing for a certain amount of customisation. 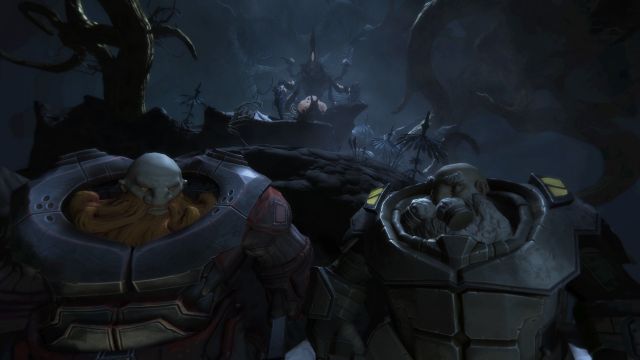 All three are controlled via an RTS-like interface and UI, in which you can direct your Dwarves in groups or individually. Like similar action-based RPGs, combat time can be slowed and paused to better time your decisions. The pause action quickly becomes a necessity rather than an option, as hordes of enemies will quickly dispatch all of your tiny warriors in no time if you don’t plan well enough. Each encounter in the game is akin to solving a perfect puzzle – if you get one piece wrong the entire picture looks awful and you’re punished for your lack of omniscience.

Upgrading your Dwarves is a matter of collecting gems scattered throughout the levels, but despite being given a number of options for improvement, none really seem to help. The difficulty of this title is bordering on the masochistic. Powering through levels can often leave the player mentally exhausted. The difference between We Are The Dwarves and a game like Dark Souls is that with every failed mission the player will never feel like they are learning from their mistakes. Time and time again I would go back to a battle and change my approach and come back with the same result. 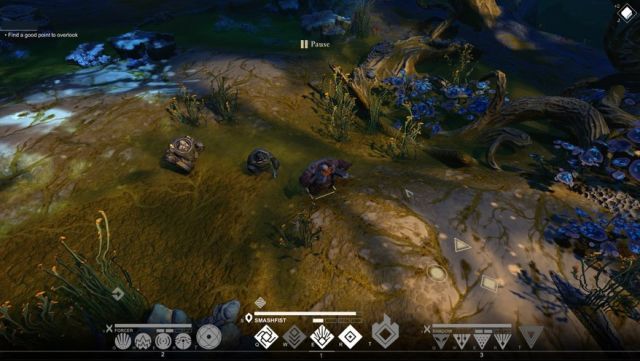 This is where the game’s best and worst features collide. The developers have done an excellent job in creating a world in which life, physics, environment and sound thrive: the game is undeniably good looking and it all comes together in some great level design and world building. In these well-crafted worlds, however, experimentation with outcrops, precipices and dangers is likely to be punished harshly. Want to blast a group of enemies from a cliff? You better have chosen the exact right time to do so.

What’s more the game will often leave two out of three of your Dwarves behind on punishing solo levels that will more than likely leave the player banging their head against the keyboard (or their mouse clicker against the exit option). Every level is scattered with dangerous swamps, pits, traps and plants that will insta-kill your adventurous beardy bloke before you even know what has happened. Some segments of the game seemed downright impossible for me to complete – when debris in a certain zero-gravity level instantly killed by Dwarf for the sixth or seventh time I was perilously close to exiting the game and immediately uninstalling it for cathartic benefit.

For those with a passion for intensely difficult games We Are The Dwarves could perhaps be your greatest challenge yet. Frustrating it may be, yet Whale Rock Games have created a title with an admirable amount of effort put into creating a universe and lore that draws the player into its innermost secrets. That is, if you can stomach replaying the same level eight times to get there.

We Are the Dwarves! (Reviewed on Windows)

For those with a passion for intensely difficult games We Are The Dwarves could perhaps be your greatest challenge yet. Frustrating it may be, yet Whale Rock Games have created a title with an admirable amount of effort put into creating a universe and lore that draws the player into its innermost secrets.

We are the Dwarves! Gameplay Unveiled

We Are the Dwarves! Kickstarter

We Are the Dwarves!