One thing I love about playing indie games is that I get to play very unique games that would have otherwise never seen the light of day. Weakless is one such game that I thoroughly enjoyed playing, despite several flaws it may have contained.

An adventure puzzle game, Weakless was developed by Cubeish Games and followed the characters known as Blind and Deaf. As one can guess, Blind is blind and has to rely on sounds to navigate whereas Deaf is deaf and relies on sight to navigate. Weakless was showing what the world may look like to those who are deaf or blind. 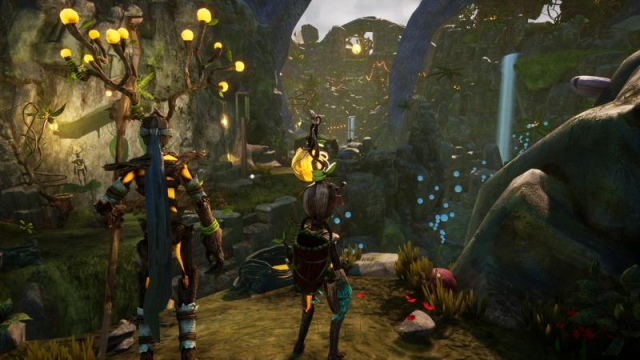 Playing the game, I was mesmerized by the beauty and details from the very start, especially the hand drawn loading screens. Simply by using hand drawn pictures, I was able to get a grasp of the world at the very beginning and learned very quickly that Deaf was different from everyone else. Saddened by his difference, he immediately takes to the older Blind and together they became inseparable. While I explored the world between levels, I was constantly mesmerized by the level of detail each area had. However, despite the amazing details to the graphics, there were some glitches such as the times when Blind or Deaf would seem to be floating in midair or on invisible platforms.

When I first started to play, I was thrust into the role of Blind from a top-down point of view. With Blind, the game became black and white and there was a limit to how far I could see. In order to see more of the world, I was instructed to slam my walking stick into the ground. This allowed Blind to hear more of the world and allowed me to navigate further. The sounds in the game were all around me as I played as Blind. Eventually, Deaf was introduced as a playable character. Once I switched to Deaf, I noticed that he was able to run, unlike Blind. He also could not hear the world at all, but was able to see in colour. Not only that, but because the world was silent to Deaf was silent, the game soundtrack would start playing after a period of time. This was not the case with Blind. With Blind, music would not play or at least, I would not notice it. Switching between the characters was pretty seamless although I did find myself playing as Deaf more than Blind. This was mainly due to being able to see the world in color and having the ability to run. However, this being a puzzle game, I had to use both characters in order to get through the levels. 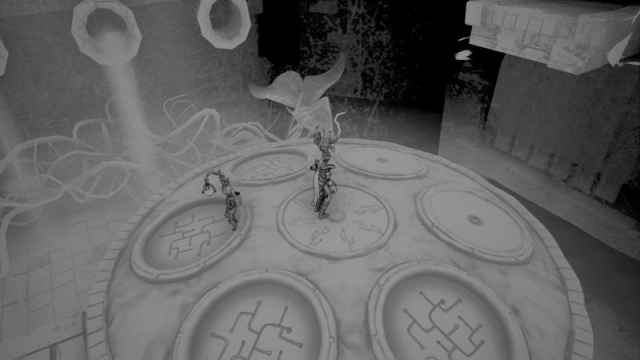 The music in this game was very relaxing. I can find myself listening to the soundtrack for this game while I read a book. However, I did find that over time, the music started to feel repetitive. The music did match fairly well with whatever environment and puzzle I found myself in. Blind as well could play instruments that can be found in random locations throughout the world. Deaf on the other hand would find logs or benches to sit on and paint a portrait of the landscape. This was a great way to get a view of the world and see more hand drawn images.

The puzzles themselves were very straightforward and to be honest, very easy to solve. I barely spent more than a few minutes on each puzzle. In fact, not only were the puzzles a bit too easy for my liking, the game itself was very short. I was able to beat the entire game in just under six hours. I probably could have beaten it a bit faster but sometimes I got a bit confused as to where I was supposed to go. Not only that, but the camera was a bit weird and would get stuck at the most random times. It can be a little frustrating when I wanted to see my surroundings quickly. The controls in the game were pretty straightforward as well. There were times when the characters would get stuck randomly. However, this could easily be solved by randomly moving around or switching to the other character where hopefully, the AI will get my character unstuck. I did really enjoy playing as both characters and it was a great concept to play as a blind and as a deaf character. It also showcased just how close the two are with one another as I traveled around and saw how I had to use one character to help the other cross a path.

Overall, I found Weakless very enjoyable and loved the take the developers did on playing as “handicapped” characters. The world was beautiful and the music was very enjoyable if a bit repetitive for my taste. However, the camera work was sometimes a bit finicky and the game itself was far too short for my liking. Not only that, but the puzzles were very simple to solve. This would be a great game to play if one has a couple of hours to kill and just wants a relaxing experience. However, if one is looking for a long-term play time, this would not be that game.

Weakless (Reviewed on Xbox One)

Weakless is a very short game with very easy puzzles. It is set in a beautiful world with good but repetitive music. It has unique characters that forces players to play as both a blind and a deaf character which I found to be very different and fun.