As a franchise with a history five and a half times longer than the war in which it takes place, Wolfenstein: The New Order brings with it an air of much-needed change, not only with regards to the story of the war itself, but also to the overflooded first-person shooter market. Always one to bastardise the factual history of World War Two, Wolfenstein moves away from minigun-toting Führers and supernatural artefacts from previous incarnations, and now plays about with chaos theory as we are introduced to a frightening world in which Hitler's Nazi army have won the war and are now controlling the world through fear and the sheer might of the Nazi war machine.

It's now 1960, and a suspiciously Aryan-looking BJ Blazkowicz recovers from his trauma sustained fighting the Nazis back in '46 only to face his worst nightmare. With a vague plan in mind to free what's left of the imprisoned resistance and launch a full-scale attack, he attempts to spearhead a campaign to win the war the world has already lost.

The story is a real gem, albeit a tad unoriginal (World War Zero similarly was set in the sixties on an alternate timeline where World War One still raged on 50 years later). However, it is given a saving grace with fleshed out characters, emotion, surprise and pathos. Dialogue can be silly at times, and then instantly juxtaposed with endearing monologues. It never quite feels too ridiculous, and helps to elevate the story element to a war shooter above the generic yawn-fest we've grown accustomed to thanks to Call of Duty's world domination. 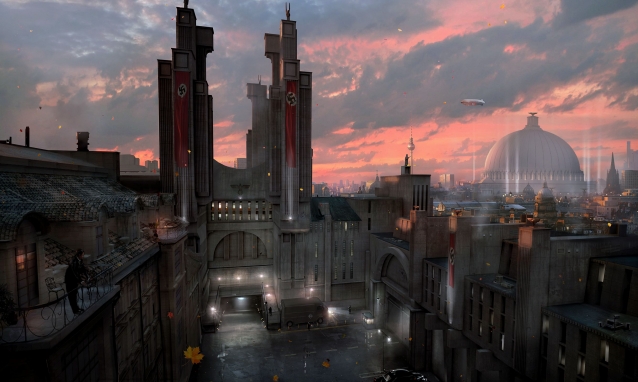 The gameplay, however, is a mixed bag. Most of what's in this bag are solid parts of an impressive whole, but a few nagging elements are decidedly rough around the edges. The New Order doesn't so much as reinvent the wheel, but more rediscover fire. The overall feel of Wolfenstein's much anticipated return is solidly split down the middle between an old-school run and gun blaster, and a more modern adventure mixing the likes of CoD and Battlefield with Far Cry 3. Gunplay is always fun, exciting and grotesquely entertaining as wading through Nazis, robot dogs and flying mechanical laser cannons is quite literally a blast. Wolfenstein: The New Order shows off the next-gen technology with stunning attention to blood splatter and severed limbs, and one can't help feel both appalled and gratified by its beautiful macabre.

The problem is that almost every new area brings with it the modern-day trapfall of enforced stealth. Despite making a hideous racket tearing apart their brethren in the adjacent room, the new areas have unaware enemies patrolling hallways inefficiently, enabling you to sneak up behind them and take them out silently. There are some good stealth mechanics at play, though, as the real aim is to seek out the German Commander(s) in each locale and take them down, as they are the ones who call for backup should you get spotted. Quite why Joe Nazi can't scream for help himself is a mystery, but it does give The New Order a sense of purpose while sneaking around, rather than just moving silently from A to B.

You can, of course, choose to ignore the stealth route and wade in guns a'blazing, but while the game is infinitely more enjoyable when taking the offensive, odds are severely not in your favour if you do this. Commanders will call for backup, the super-Nazis are strong and relentless, and ammo is generally scarce. The cover system is basic, allowing you to lean and fire, but it doesn't feel overly slick or useful. Wolfenstein: The New Order frustratingly coaxes you into taking the stealth route when it's put so much more love and attention into the firefights. 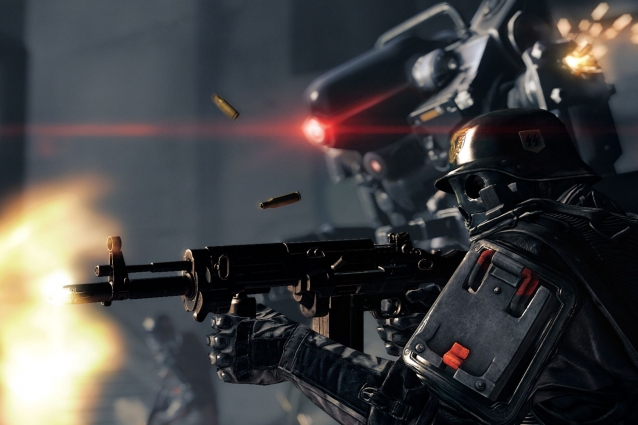 Be that as it may, the new and improved Wolfenstein offering is more than just guns and stealth. It has its own perk system which allows your soldier to upgrade all aspects of his abilities based directly on how you play. If you use a lot of guns in particular ways you will find perks that will unlock more efficient and deadly ways to off your enemies (dual assault rifles, anyone?). Keep stealth-killing and your abilities in that field will increase automatically. It's a decent system that keeps things simple, and doesn't break the game up as you read through each and every one to decide what's best for you. Wolfenstein knows what type of BJ Blazkowicz you are and enhances you in kind.

Things come a little disjointed when you're, say, faced with a few overpowered mechs, and you've spent your time becoming a master ninja. No amount of sneaking will take these things down, and you could be faced with a situation where your efficiency behind the trigger is sorely lacking during the times you need it most.

Behind the scenes there is the other modern trapping of endless collectibles, unlockables, and pointless letters and articles to read, serving little purpose other than to attempt to give the story some deeper meaning and to appease achievement / trophy hunters. Finding all pieces of four separate Enigma codes and subsequently deciphering them grant you gameplay buffs like infinite ammo, and also add more options for the more seasoned gamer, including a mode where you have one life for the entire campaign – permadeath on a grand scale. 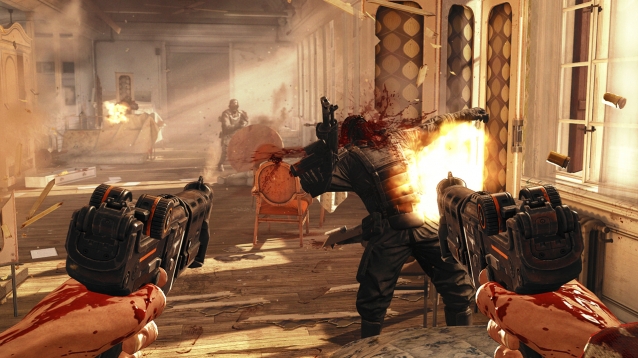 Wolfenstein: The New Order has done a fantastic job overall of marrying the oft-rejoiced classics Wolfenstein 3D and Return to Castle Wolfenstein with modern trimmings. Running and gunning, when you get the chance, has never felt better, just like in the good old Wolfenstein days. Interspersed with this are the more familiar settings of perks and stealth, which do work well but are not without their flaws.

Graphically, The New Order is astounding. Though not without one or two glitches along the way (hovering bullet casings obscuring the sight of the enemy soldiers is particularly frustrating), what this latest offering does, it does well. Really well. What is disappointing is the apparent necessity to forego the solid roots of old-school Wolfenstein (Nazi blast fest) and litter it with silent takedowns, perks and collectibles we've all seen a million times before. The abortion that was 2009's release of Wolfenstein attempted to bring an open-world ethic to the first-person franchise to less than no avail. This time around it plays much better with this coupling of older gameplay with modern padding, but is by no means perfect.

As the good outweighs the bad, this is certainly worth a punt. Great story, enjoyable gameplay and the key element of fun are littered throughout the game, and are marred only slightly by a few niggling technical issues and rough-edged gameplay in places. A hugely enjoyable ride, just as single-handedly blasting through waves of über-Nazis should be.

As the good outweighs the bad, this is certainly worth a punt. Great story, enjoyable gameplay and the key element of fun are littered throughout the game, and are marred only slightly by a few niggling technical issues and rough-edged gameplay in places. A hugely enjoyable ride, just as single-handedly blasting through waves of über-Nazis should be.