Worm Jazz is an interesting puzzle game that takes mechanics from the classic game Snake, along with some slight Bomberman nods, to create a decent amount of clever yet challenging puzzles. There isn’t a story to Worm Jazz, but the earthworm you play as does have a name and early on we can see that Mr. Mark loves three things: golden apples, silly hats and smooth jazz.

The reason Worm Jazz has its name is simply because of the jazz music playing continually in the background throughout the game. It makes it an interesting experience since it being a puzzle game can get frustrating at times, but pausing, taking a breath and listening to the sweet sound of jazz in the background calms you down and prepares you to take another crack at it. While the jazz plays in the background, you’ll be going through over 50 levels that take place in three different settings: muddy ground while it’s raining, a frozen lake and the desert. The main goal of each level is to solve the puzzle to acquire the golden apple, but you can achieve the golden apple without completely finishing the level. Each level is rated by three stars and getting the golden apple can sometimes only account for one of those stars, while the others can require a little more work. The levels are set up in an overview grid-like space where you can move Mr. Mark one tile forward, left or right with the left thumbstick but not backwards, instead you can use the left trigger to undo your last move. Since this is supposed to be a more of a relaxing experience than your average puzzle game, you can undo as many times as you want, but that doesn’t take away from some of the more challenging puzzles later on.

Each level contains grey orbs on the grid that act as food for your earthworm and when it consumes one it grows in size by one grid space which is where the Snake inspiration comes to play. Collecting all the food is the second half of the puzzle and will reward you with all three stars if you get them all along with the golden apple, but is much harder to accomplish. It can get tricky since some of the levels require you to move or collect food in a very particular order. It’s essentially trial and error until you get it right, but the undo button being unlimited uses was a huge help and will make you at least attempt that three-star rating every time. 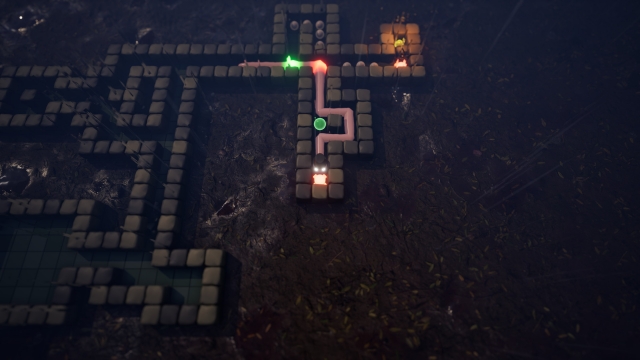 Some of the earlier levels add mechanics like mines that your worm will eat and die unless you pick up a green orb. Green orbs are added earlier on and can be eaten exactly like food but glows in the worm’s stomach to show where it is in the worm. That information is important because when you consume a mine while you have a green orb, only the worms head up to the green orb will be destroyed resulting in a shorter worm from the tail end to the green orb. There are some rather clever puzzles that surround this mechanic where you have to make sure you consume the green orb at the perfect point along with the food so you can reach the point you need to when you eat the mine.

Later levels continue to add new elements such as wormholes, red orbs that work like the green orbs but act as another detonator for the mine and boulders that can be moved around by Mr. Mark. As you make your way through the levels, they get more challenging as all these new mechanics come together in thought-provoking ways. Some levels will require you to stop and look at the map before you start squirming around because you need to plan your moves perfectly so everything lines up correctly. It definitely provides those ‘ah-ha’ moments that you would expect out of a well-done puzzle game. Visually, Worm Jazz looks surprisingly great especially in the first area with the rain falling from above on the dirt floor. The lighting and reflections on the surfaces for the ground in the puddles and Mr. Mark himself are impressive for such a small game. I also think the grid format for the puzzles works well for showcasing the movement of the worm itself. The way its body can bend in numerous angles while you’re extremely long looks awesome and truly worm-like.

Worm Jazz is a clever puzzle game that can get challenging as you work your way through the levels, but it’s so forgiving that it mainly just wants you to sit back, relax and listen to some smooth jazz.