I'm not a driver, so I've never really had a good grasp of vehicles. It doesn't help that I also have limited spatial awareness and a high propensity for getting lost. As a result, I'm usually not that good at driving games, which anyone who has ever seen me get lost in Sega Rally will be able to attest to. Something that I am pretty good at is crashing and causing vast amounts of damage to everything unfortunate enough to be in my path. For this reason, Wreckfest is my kind of driving game.

Coming as something of a spiritual successor to the company’s Flatout series, this is Bugbear Entertainment’s latest entry in the niche “destroy everything and maybe do some racing at the same time” genre. The aim is relatively simple: beat your opponents in any way possible. Contests are usually races, but “bowl” style arena deathmatches are in the mix too.

Whilst the premise of the game is particularly simple, the execution is brilliantly complex. There are hundreds of customisations and options to choose from. Modding your cars with various upgrades, tweaking suspension and differential, infinitely customisable paint-jobs and liveries, the list is massive. You could feasibly spend just as much time tweaking your car for a race as you do actually racing. You don’t have to, the game is just as easy to pick up and play as it is to master, but having the options there is really nice to see. 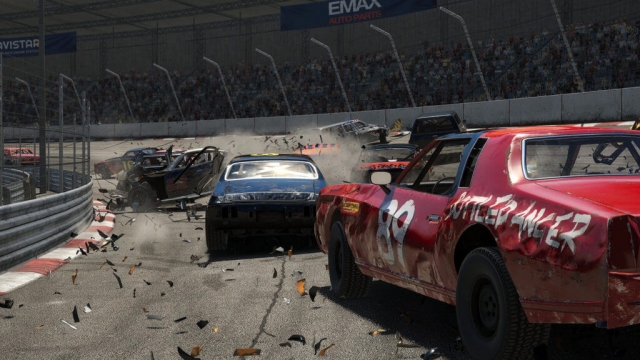 As well as the regular cars that you might expect to see, there are a few off-the-wall vehicles in the game. The very first event that I played saw me sat atop a ride-on lawnmower, trying to destroy 49 other lawnmowers in a ridiculous free-for-all. There’s a sofa race in the first batch of events too, and this is just as ridiculous and difficult to complete as you might expect.

The game looks absolutely lovely. There’s a great variety in the vehicles and tracks, with lots of different environments and car types. I’d have liked to see a few more weather effects and maybe a night race or two, but that’s really just nitpicking. It’s a great achievement from a relatively small team. Debris and damage is persistent, giving everything a real feel of being live. The physics are tremendous too, with cars reacting how you might expect after a few dozen shunts to the bonnet. You can turn on “realistic damage” meaning that a hit can totally disable you, but personally I found it more fun to leave it turned off. There’s a huge sense of satisfaction limping your three-wheeled chassiless abomination across the finish line.

One thing that did get a bit irksome was the loading time of races, with loading times relatively high for a game that was installed to the PS4’s hard drive. It’s not a deal-breaker by any means, but if you’re impatient, then you might want to keep a newspaper handy for the down time between races. Once everything did load, I found the experience to be stable and enjoyable both offline and online. The online mode is generally just as much fun as the career mode, with the matchmaking being pretty reliable and (at the time of writing) relatively short waits to be paired up with players of a similar level. I didn’t feel immediately overwhelmed like I do with a lot of online games, so it’s a good one to dip in and out of. This isn’t one of those games where you need to dedicate weeks to practicing before going online.

The soundtrack deserves a special mention for being exactly what it ought to be with a game like this. Whiny soft metal plays sounding exactly like a vehicular combat racer from the early to mid 2000s. It’s like playing Burnout, but without the annoying radio DJ talking over everything. You can turn it off if you prefer, but I quite enjoyed it. Your mileage may vary here of course depending on musical taste.

Overall, this is a perfect continuation of what Bugbear has done previously with the Flatout series. They may no longer hold the license to that IP, but they definitely still have the spirit of it. This is a perfect blend of customisation and carnage, with something for everyone. I can’t recommend it enough, and it deserves to be just as popular as the games that came before it. A perfect continuation of what Bugbear has done previously with the Flatout series. They may no longer hold the license to that IP, but they definitely still have the spirit of it. This is a perfect blend of customisation and carnage, with something for everyone. I can’t recommend it enough, and it deserves to be just as popular as the games that came before it.