Even if you haven’t seen the cartoons, read the comic books, played the games or watched the movies, you couldn’t have escaped the Marvel Universe. The struggle of mutants against the world, and each other, but this time around the game is focused on one main character, “Wolverine”. 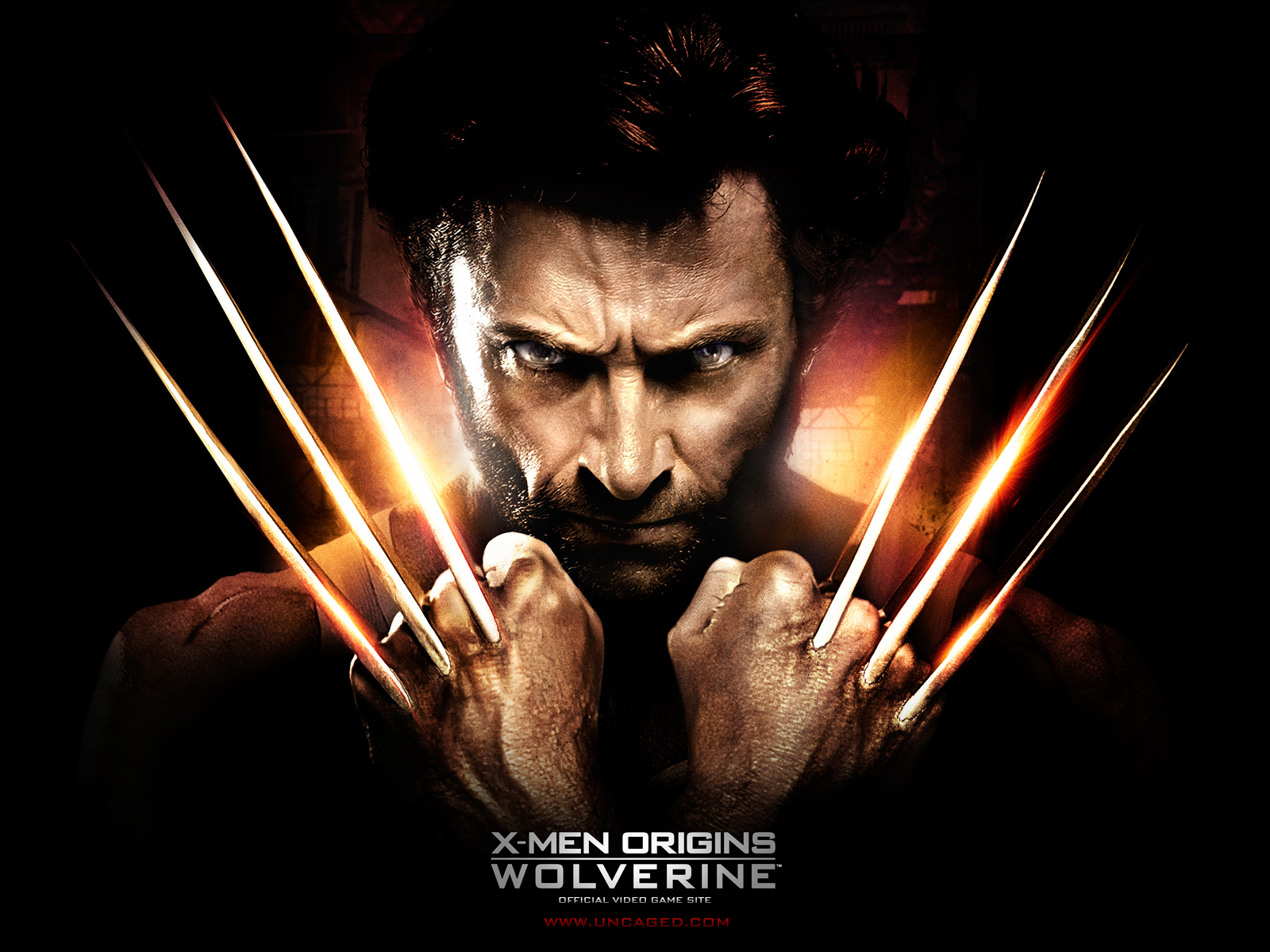 Many opinion polls name him as the most liked character, the most violent and some even say the most unknown. The recent movie that was released (staring Hugh Jackman) showed a life as yet unknown to the fans, a kinder, softer Logan that we all knew about but hadn’t seen.

The game is roughly based on that movie, picking up stories not explained and changing others to suit a more fitting gaming experience. The main storyline isn’t defined with a start and end, but more of being along for the ride with Logan for a short time (and have a little fun along the way). 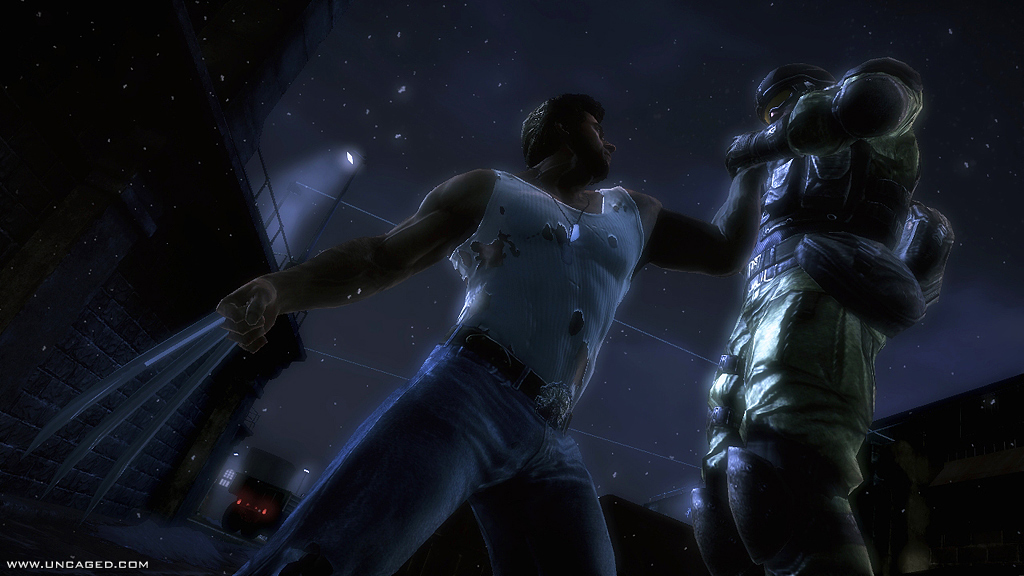 This review is based on the Xbox360 Uncaged Edition, while the ‘Uncaged’ was release for the Xbox360, PS3 and PC it was not released for the Wii, PS2, PSP and DS. This was due to the processing power that the game required to add in realistic healing effects. Although the story in all platforms is the same, main bosses, abilities and some characters are replaced (look out for more reviews on those platforms).

There are only two missions, but are split up into several sections. The first mission is set in the African jungle and this is the one that broke up the ‘Weapon X’ team, the second is in the future (and no, I’m not adding spoilers … maybe!). 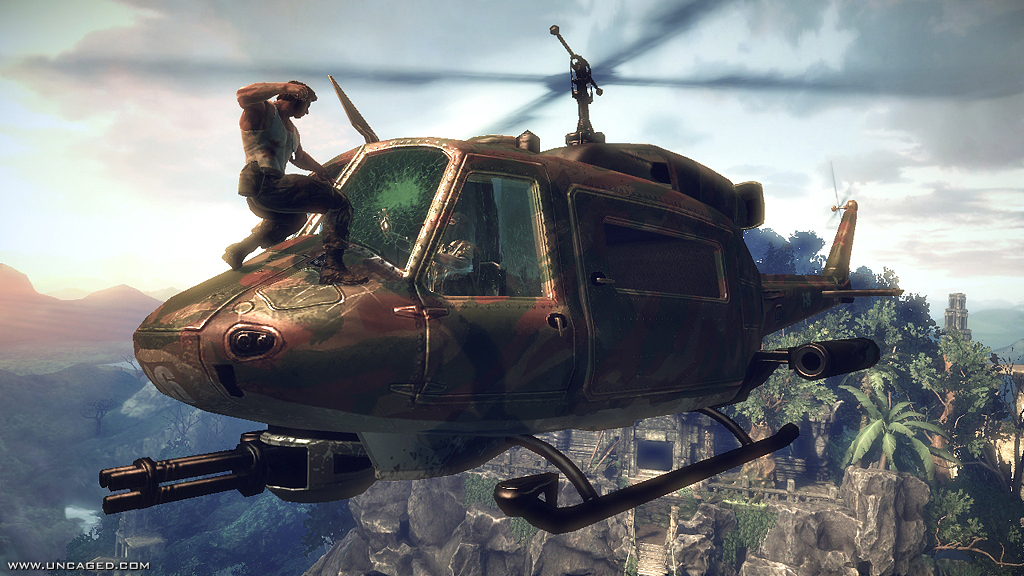 Now one of the unique parts of this game is that you play the missions in a series of flashbacks, which at times is a little annoying and confusing but allows you to progress through each level and build up your characters strength and abilities.

This is a unique approach to gaming, as usually each level gets harder as you go along. Within the game you level up Logan by how well you perform, follow on screen prompts and defeat enemies. Starting off slow, the game leads you into the various attacks that Logan can perform, lunge, grab and most importantly, slice. But you don’t have to remember massive amount of combinations to defeat opponents, there are a lot of prompting and hints along the way that help you to defeat them.

You also get boosters called Mutagens, allowing you to have extras from increased rage to increased health, only 3 can be used at one time but there are 3 levels to each Mutagen and you have to search for them within the game.

Other ways to boost Logan are the combat reflexes, as described earlier you level up Logan (each time increasing rage and health), but you also get combat experience for what you fight, and the quicker and better you disposed of said enemies, the more experience points you get against that class of enemy.

Ok, I’ve left this out till now as Rage is a huge part of the way Logan fights.

As you defeat opponents you fill up a Rage meter, once you get enough you can perform one of 4 main attacks … “Berserker”, “Claw Spin”, “Drill” and “Flip”. 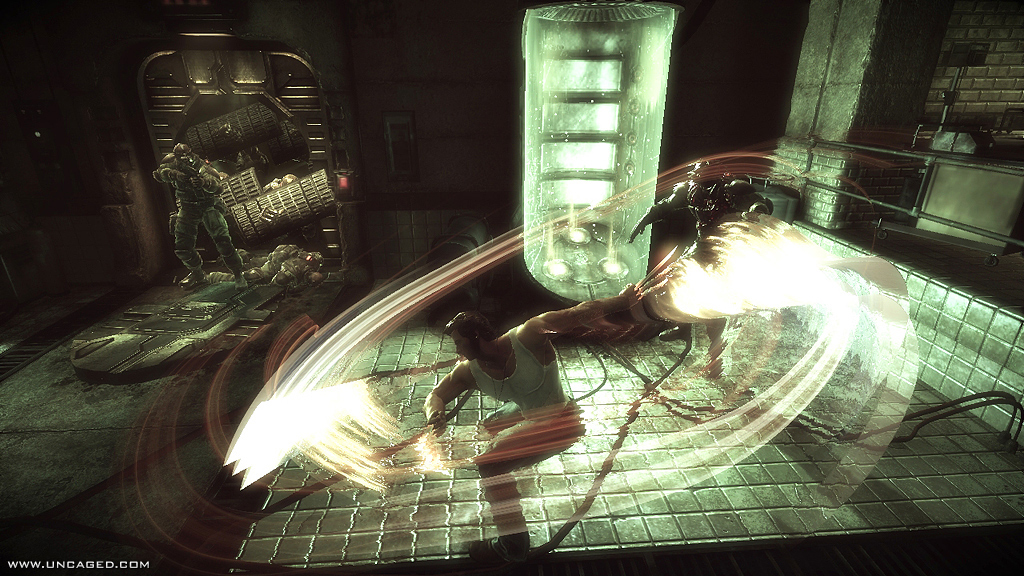 “Berserker” is just as it sounds, for a short period of time all of Logan’s attacks are magnified, allowing him to go bananas on the opponents.

“Claw Spin” is also just as it sounds, spinning at an extremely fast pace with claws extended, this is one of the best ways to take out large groups of opponents.

“Drill” is probably one of the most devastating out of the 4, a straight shot that puts all Logan’s power into a drill motion and can take out one main opponent or boss (once leveled up to maximum).

The last is “Flip” where Logan performs a series of somersaults landing in an energetic slam.

Each of these 4 Rages are increased as you progress through the game, the more enemies you take out, the better the Rage becomes.

With a few of these like “Spin” and “Flip” you can direct Logan around the playing field, taking out the opponents. The same rules apply to leveling up; the better Logan is the more powerful these Rage attacks become, but they use up your rage meter so watch out.

And as already stated, Rage is collected by defeating opponents but it can also collected by exploring the levels and collecting the power ups and mutagens. 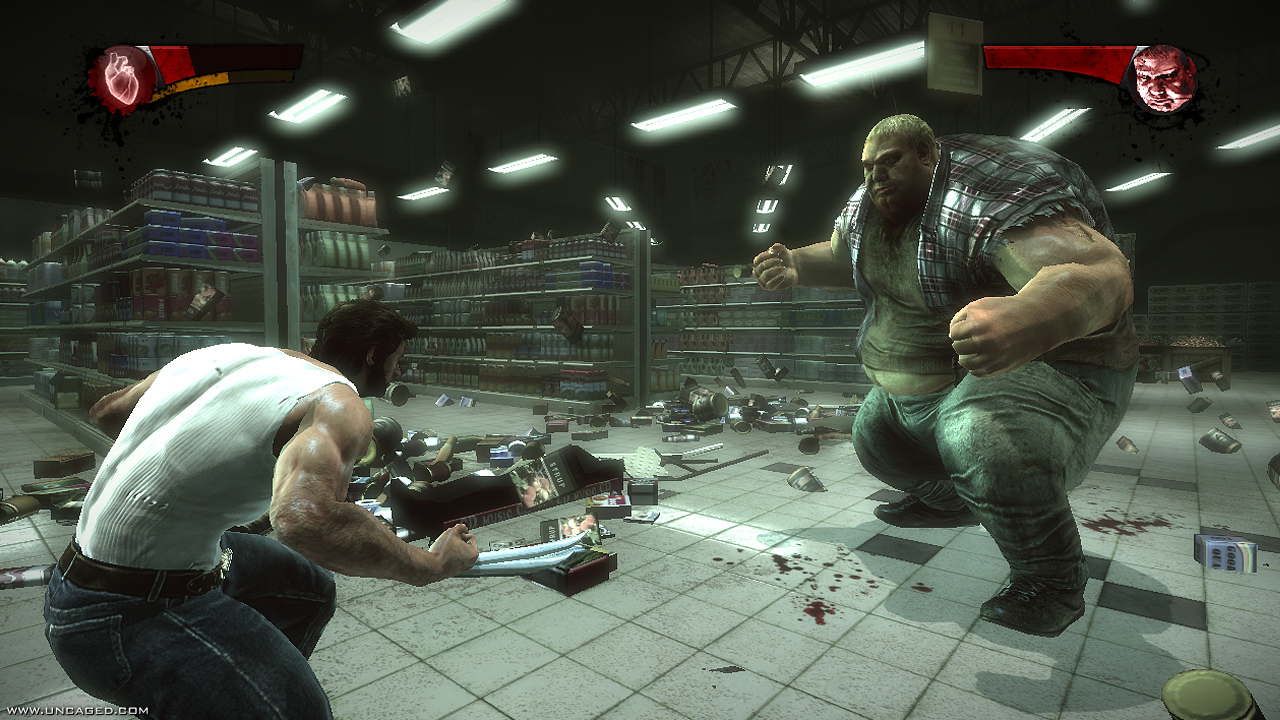 Logan also has his healing ability and feral senses, allowing him to regenerate back to full strength after a time and spot hidden items and find routes out of danger. With the healing ability, you have so much of a health until your vital organs are exposed; at this point Logan will become weaker, slower and will need a longer time to regenerate.  One of the Mutagens gives you the ability to fight harder and stronger the closer to death Logan gets.

The Feral senses are Logan’s animal instincts, allowing you to ‘sniff’ out danger. In this mode you can see hidden dangers, pickup items and your path through the level (just in case you get lost fighting all the bad guys).


But what about normal hand-to-hand, I just want to fight?

This is the real fun part of the game, slicing, dicing and generally stabbing your way through the bad guys. There are some cool combination moves like lunging and then throwing the inept guard while you perform a flip (this is fun to watch), or performing an instant kill (which gives you one of a few close-up movie style action shots). Because this review is for the Xbox, there are also hidden achievements and trophies that you can get, like using the ‘Ghost’ solders own shotgun against him or killing a number of enemies by lighting them on fire! 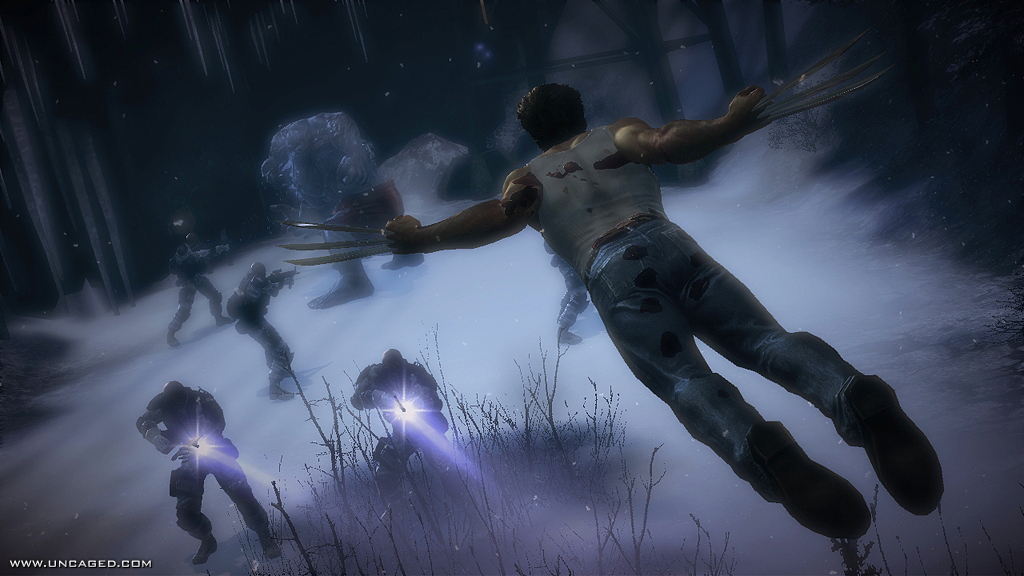 There’s a huge amount of ways you can kill someone and even after you’ve found them all, you’ll want to do it over and over again as there’s always something new that happens. That being said, sometimes the game does have a few glitches like finding the inept guard has killed himself by getting trapped in a door. But for the sheer fun of slicing someone’s arm, leg, head off or body in half, you can’t beat it.


Right, I know how to play it now but what’s it like?

Well, from the off the game put’s you right into the thick of the action. The controls to move and fight become second nature after a while and performing any of the “Rage” moves are easy. Even the guided steps to complete a puzzle or boss are smooth and not too complex to complete.

The graphics are nice, sharp and at times very impressive. The realistic regeneration that makes this version ‘Uncaged’ are very realistic and you’ll find yourself just watching Logan’s chest grow back from bare Adamantium (if he’s wearing an outfit, that doesn’t grow back, just skin!).

The score (sound to you and I) is spot on, from Hugh Jackman’s voice to the sound of a Sentinel (0h n0es!, have I given too much away?). The tempo of the music quickens when you about to face a difficult area (boss or lot’s of opponents) and even the inept guards have their own ‘chatter’.

(I skipped to the end, summary please?)

As a movie based game, it wins hands down. You feel like you are Logan battling you way through the Marvel Universe. As a standalone game there are some flaws, no multiplayer option, co-op or other characters available, only Logan (but you do get to unlock several costumes, like the totally fappable original yellow and black!). But with all its flaws, this game will have you coming back for more, even if it is just to go bananas in berserk mode!!

Even if you haven’t seen the cartoons, read the comic books, played the games or watched the movies, you couldn’t have escaped the Marvel Universe. The struggle of mutants against the world, and each other, but this time around the game is focused on one main character, “Wolverine”.