XCOM: Enemy Within is the DLC pack that fans of Enemy Unknown have been waiting for. While the Slingshot DLC pack disappointed with its rather meagre offerings, this latest round of content offers a huge amount of additions to the XCOM experience and significantly changes the nature of the game.

Our early preview focused largely on the two additional XCOM unit types that have been added to the mix, through genetic modification and cybernetic enhancements. These new soldiers are a small part of a larger whole, but they are among the first to reveal themselves and have significant impacts on gameplay.

Both genetically enhanced troopers and ‘MEC’ troopers are unlocked early on through the use of a new alien resource called ‘Meld’, which can be scavenged from canisters strewn around the strategic maps on which you will be doing battle. By hoarding and researching this substance, and by building the new facilities for your science team, you can upgrade any of your existing troopers with Gene Mods or convert them into a MEC very early on in the invasion. 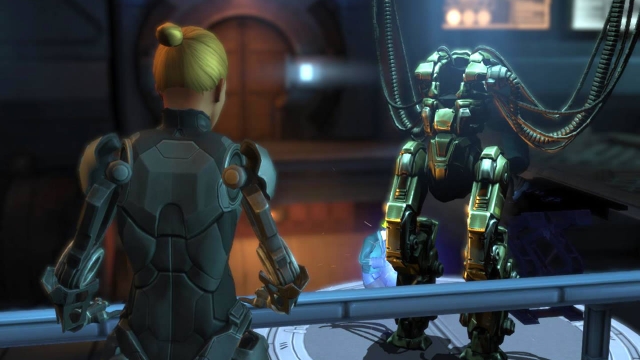 MEC troopers are cybernetically enhanced super-soldiers encased in a giant mechanised suit of killy-deathiness. They have increased health, extremely powerful heavy weapons and can integrate several secondary weapons systems into their armour: such as grenade launchers, flamethrowers and proximity mines. Because of their size, they are unable to utilise cover and must instead compensate with their advanced armour, offensive capabilities and a unique skill tree.

Converting an existing soldier into a MEC trooper is permanent and strips them of their existing class, although they maintain their rank and so can get a head start on the new skill tree. However, the class a soldier was pre-conversion does have a small impact by granting the MEC a unique bonus ability. For example, a MEC who was a former sniper gains a bonus to accuracy when firing from a stationary position.

Gene Mods are more subtle than MEC conversion, and are applied to existing soldiers who otherwise maintain their existing class and abilities. A number of different modifications are available at the outset, while others can be learned from conducting alien autopsies. Gene Mods are applied to individual body parts (brain, eyes, chest, skin, legs) and each soldier can be upgraded multiple times, up to one mod per body part. A trooper volunteers for genetic modification

The mixing-and-matching of Gene Mods allows for the creation of specialist troopers for a number of circumstances. An assault trooper with Mimetic Skin and a Secondary Heart can use his partial invisibility to get close to the enemy before striking, and take greater risks with a better chance of survival. A sniper with improved Muscle Fiber Density and Depth Perception can scale buildings with a single leap and fire from their elevated position with increased accuracy.

Both new troop types change the pace of gameplay. The MEC trooper represents pure power and resilience, a manifest and unmistakable show of force on the battlefield. The Gene Mods are more subtle in their operation, and require more thought in their deployment, but in the right hands can prove powerful tools that can turn the tide of battle.

You’ll need a lot of Meld to keep your troops in Gene Mods and MEC suits, and fortunately there is a fair bit to go around, spread throughout most maps for you to pick up on your operations. However, capturing Meld requires aggressive expansion, as the containers in which it is stored will self destruct after a certain number of turns; which means that risks must be taken in order to maximise your Meld reserves. Gene Mods and MEC troopers represent the two most obvious of the new tools in the XCOM arsenal, but many more changes and tweaks have been introduced. New equipment such as Flashbang Grenades and Mimic Beacons has been added, and several class abilities have been tweaked and balanced.

While the XCOM organization may have a few new tricks up their sleeve, they are by no means guaranteed an easy ride, as their enemies are more numerous and powerful than ever. To start, two new alien types have been introduced: the Mectoid and the Seeker.

Most of you have probably already guessed what the Mectoid is, but for those still in the dark, it’s basically a Sectoid in a MEC suit. This is the alien’s answer to your MEC Troopers, a dual plasma-wielding cyborg-soldier. They have a whole bunch of health, a lot of firepower and the ability to mind merge with Sectoids, giving themselves a powerful force shield in the process. They are dangerous enemies and not to be taken lightly. A Mectoid with its Sectoid entourage

Seekers are more specialist in their purpose, using their cloaking devices to roam the battlefield, giving priority to isolated targets whom they can immobilise and attack with impunity. Seekers are not overtly powerful, but their clever tactics can cause problems for lone wolf assault troops or Squadsight snipers hiding in the rear.

Further balancing has taken place in terms of enemy abilities and AI. Enemies that don’t utilise cover now often go into overwatch mode when discovered, and the Sectopod has been significantly buffed to increase their toughness when compared to the new Mectoid. These are the most obvious changes, but are just two in a list of many.

It’s not just the new and improved aliens that XCOM have to worry about. Enemy Within introduces an entirely new faction to the war, the shadowy EXALT, a group of human fanatics committed to capturing and exploiting alien technology and using it for their own advancement. If ignored, EXALT will conduct clandestine operations against XCOM, stealing resources, sabotaging research and increasing the panic levels in friendly countries. In order to prevent these attacks from occurring, XCOM must take the initiative, and bring the fight to EXALT.

By investing a small sum into satellite scanning, EXALT cells can be uncovered and agents sent to conduct operations against them. Covert operatives will be sent away, armed with only a pistol and one item, and will be unavailable for several days whilst they conduct their mission. After a few days, a squad will have to be dispatched to recover them, and combat will occur against the EXALT cell in one of two new game types.

Covert Data Recovery is a defensive mission type, in which the XCOM squad must defend a data transmitter and encoder against several waves of EXALT soldiers, while Covert Extraction requires that the covert operative hack into two enemy communications arrays before retreating to the extraction zone. 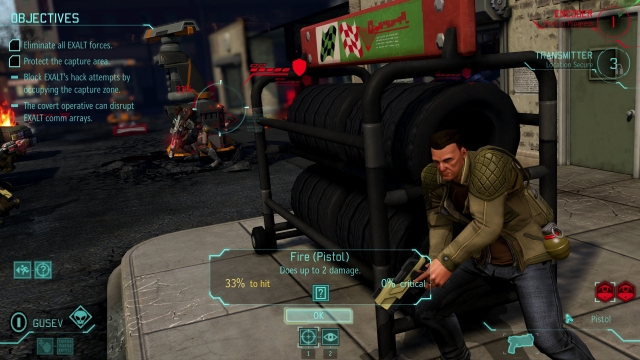 An XCOM agent in a covert operation

Combat with EXALT is refreshingly different from fighting the aliens, and the tactics used by the enemy are very distinct. Like XCOM, EXALT soldiers are broken down into four different classes and will regularly be seen using specific abilities. Heavy weapons troops can, and will, use their rocket launchers to hit multiple soldiers and destroy your cover, and medics will heal their wounded comrades. EXALT will also increase in power as the game goes on, and will independently discover Gene Mods and advanced weaponry, which they will bring to the field against you.

Completing missions against EXALT gives you clues as to where their global headquarters is located, and the group can be eliminated by destroying their main base once you have enough information to locate them. Caution is advised though, as if you jump the gun and invade the wrong country, they will immediately and permanently withdraw from the Council.

With the introduction of Meld, new XCOM units, new technology, new aliens, a new enemy faction and a number of tweaks and balances; XCOM: Enemy Within certainly adds a huge amount to the overall package. It may surprise you to know, then, that there is even more to this massive DLC pack. 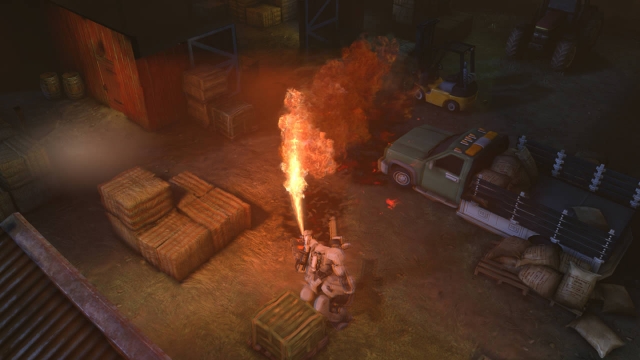 Enemy Within adds a new three-part sequential mission pack, similar to the Slingshot DLC pack, which will introduce a new, unique character to your barracks. Also added are around 50 new maps, a unique stand-alone Council mission, additional language packs for soldiers, further Second Wave gameplay options, bug fixes, a new cheat-unlocked William Carter ‘hero’ character and, no doubt as a result of constant fan requests, an XCOM base attack mission.

There are very, very few criticisms that can be levelled at Enemy Within. The new soldier types are introduced very early in the story, and are far more technologically advanced than the rest of the gadgetry available to XCOM at the time. The technological disparity is glaring, and it also leads to minor story inconsistency down the line; notably when Dr Shen expresses his distaste at the alien’s fusing of organic and cybernetic material when you first autopsy a Floater; by which point you are likely to have had a MEC Trooper on staff for several weeks at least.

By contrast, EXALT are introduced quite late into the game. There is little reason as to why they could not have featured as a consistent threat from the relative outset of proceedings, and this certainly would not have adversely impacted the story progression in the same way as the early introduction of MECs and Gene Mods had. 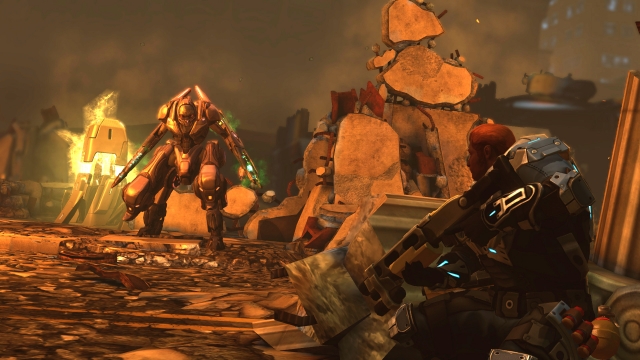 Finally, the already wide gulf between ‘Normal’ and ‘Classic’ difficulty is further widened by the additions made. The extra technology available to XCOM makes ‘Normal’ difficulty substantially easier than in the vanilla game, while longer research time and balancing tweaks make ‘Classic’ difficulty even harder than before. Newer players and true XCOM veterans will be OK, but if you fall between these two polar extremes then your difficulty choice is ‘Cakewalk’ or ‘Punishing’, with no middle ground.

XCOM: Enemy Within is an outstanding DLC pack. The sheer wealth of additional content is overwhelming, and the combined factors substantially change the overall experience. The result is something new and fresh, even for veterans of hundreds of hours in Enemy Unknown.

This is what DLC should be. Masses of content. New options, new maps, new missions, new soldiers, new enemies, balances and optimisations; hours and hours of brand new gameplay. It’s all here. It’s all good. It’s the best that XCOM has ever been.

XCOM: Enemy Within (Reviewed on Windows)

This is what DLC should be. Masses of content. New options, new maps, new missions, new soldiers, new enemies, balances and optimisations; hours and hours of brand new gameplay. It’s all here. It’s all good. It’s the best that XCOM has ever been.