Yooka-Laylee and the Impossible Lair Review

One of the things that I've always taken a bit of a dislike to in games journalism is the over-reliance on platitudes. In particular, using the name of one popular game to describe another is something that bothers me. There aren't that many "roguelike" games which are actually similar to Rogue other than having procedurally generated levels for example. The worst offender is the analogy that a game is "The Dark Souls of x" to describe a game that is difficult. Aside from the fact that it’s overused, people who say this have clearly never played Donkey Kong Country on the SNES. Playtonic did though of course, with the developer being comprised largely of ex Rare staff who worked on the title.

Yooka-Laylee and the Impossible Lair is to Donkey Kong Country what the original Yooka-Laylee title was to Banjo-Kazooie. That is to say, that it apes the formula (pun intended) almost exactly, with a look and feel that matches the old aesthetic, but without losing its own identity as an original game. Whereas the first title was a 3D platformer, this is an old-fashioned two dimensional affair, but with a 3D rendered overworld to link everything together. It sees you collecting bees in order to help you defeat the evil Capital B in the titular gauntlet of enemies. 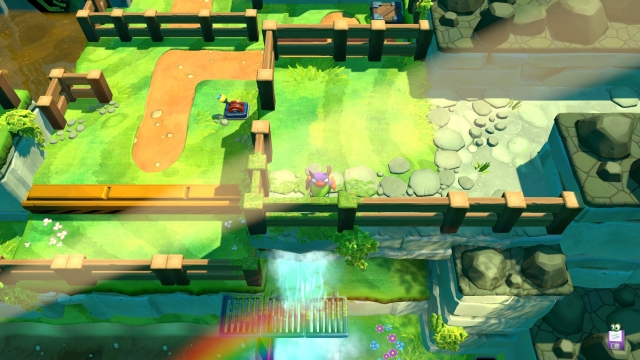 With bright and colourful graphics, cute-as-a-button enemies and the trademark wry humour of Playtonic, this is a platformer as I remember them from years gone. In recent times, stylistic platform games like Trine and Limbo have been more popular, but this game ignores all that and goes for vivid, in-your-face visuals which look absolutely stunning. There are plenty of visual options to add in the form of tonics too (more on those later), including a big-head mode, which I haven’t seen since back in the day. If you fancy going super old-school you can have a 4:3 picture with GameBoy resolution and colours if you like too. I’m not sure why you would, but you can.

It’s not just a looker either, you’ll get a lot of aural pleasure from the game too. From the adorable warbling of the characters when talking to the satisfying crescendo of collecting a long chain of quills, the sound effects are all fitting and add some textural satisfaction. The soundtrack is sublime, with David Wise and Grant Kirkhope producing some truly memorable tunes that play throughout. 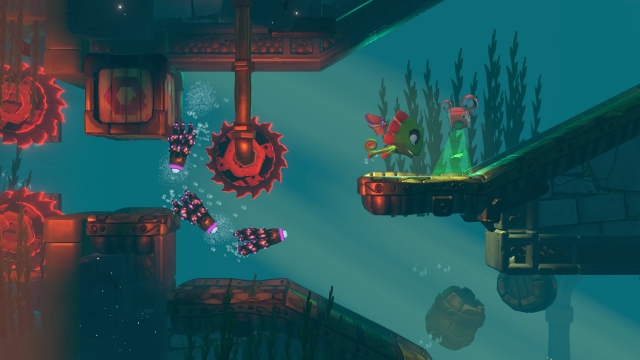 There are 20 chapters altogether in the game, and each one has two different versions which can be unlocked by doing things in the overworld such as flooding an area to make a water level or freezing it to get an ice version of a level. The changes are different enough that you could argue they are different levels and therefore you’ve got 40 levels to play through. Each level has a bee to collect and there are eight more scattered across the overworld to be found. The more bees you have, the less impossible the Impossible Lair becomes as each bee allows you to take one more hit before dying. The aforementioned lair is accessible right from the outset in the same manner as Hyrule Castle in Legend of Zelda: Breath of the Wild. You can attempt it right away if you’re totally masochistic, but you’ll probably fare better if you’ve done more of the main game before having a stab at it.

And they weren’t lying when they said it was impossible either, this is an incredibly tricky level to complete, and at the time of writing I have yet to make it all the way through. Just like its primary inspiration, Yooka-Laylee and the Impossible Lair is designed to provide an extreme challenge. There are a lot of tricky jumping sections that need precision timing, and that final level is enough to make you tear your hair out, fortunately I don’t have hair any more so I managed OK. The game is very forgiving with checkpoints however and allows you to skip bits that you’ve failed a few times if you need to, so it’s not inaccessibly hard. Actually completing the game seems relatively rare though, with less than 10% of Steam owners having the “defeat the Impossible Lair” achievement. This is the only part of the game that doesn’t allow for skipping and there are no difficulty options at the moment, which is a shame as it may exclude some users with motor control issues. The fact that the rest of the game is accessible is great to see, but it would have been nice to have a Possible Lair option for those who need it. 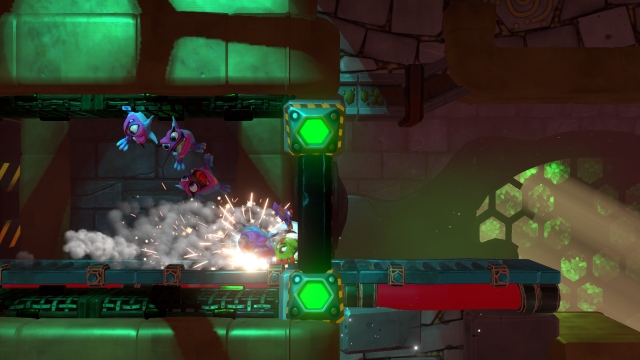 The gameplay is perfectly crafted, with responsive controls and no “leap of faith” sections to be found. Playtonic’s decades of experience with platform games absolutely shows here, with exceptional level design making it an absolute joy to play. There are a variety of mechanics throughout, most of them being self-explanatory even if they’re a touch on the hard side sometimes. You can take one hit, which will cause Laylee to fly away. You have a few seconds to catch her, but if you don’t a second hit will kill you. Lives are infinite though, so all this amounts to is replaying sections until you either complete them or get fed up and skip to the next checkpoint.

There are more secrets and unlockables than I care to mention scattered throughout the game. Exploring the levels grants coins which can be used to unlock “paywalls” throughout the game. Trowzer the snake from the first game is back to enforce these, meaning a certain amount of exploring is necessary to progress to later chapters. There are also special Pagie levels, which have small puzzles to complete that reward you with alterations to the overworld. Some of these are essential to progression and some allow you to unlock the second version of a chapter. 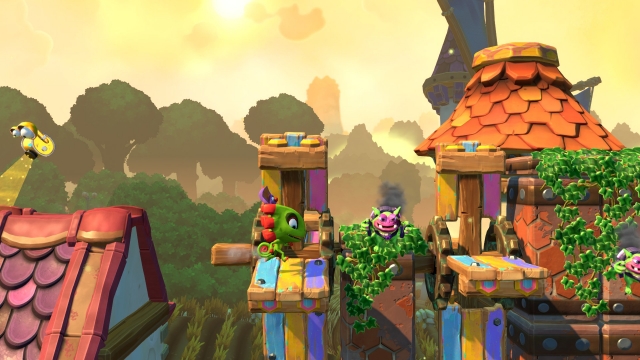 There are a slew of tonics hidden in hard to access areas as well, and these add another dimension to the game. Some of them are just graphical as mentioned above, but some make the levels easier or more difficult. This introduces a risk and reward system where you can make levels harder for a quill multiplier, or make them slightly easier with a penalty to your overall quills. The quills themselves are necessary for activating the tonics that you’ve found and for opening some areas of the game as well. If you find yourself short you can just replay levels until you have as many as you need.

Honestly, I couldn’t actually find anything to fault Yooka and Laylee’s second outing. Even minor things like loading times and tiny graphical glitches are nowhere to be seen. I always try to be as objective as possible with a review and I really tried to find one tiny element where I could say “I’m splitting hairs, but…”; however, there wasn’t one to be found. If there was such a thing as a perfect platformer, then Yooka-Laylee and the Impossible Lair is it. I was a big fan of the original game, and I’m delighted to see that this one is even better. Honestly, this is an absolute banger that’s right up there with the classics of the genre and I absolutely loved it. There’s no reason not to go out and buy this game right away unless you have chiroptophobia. 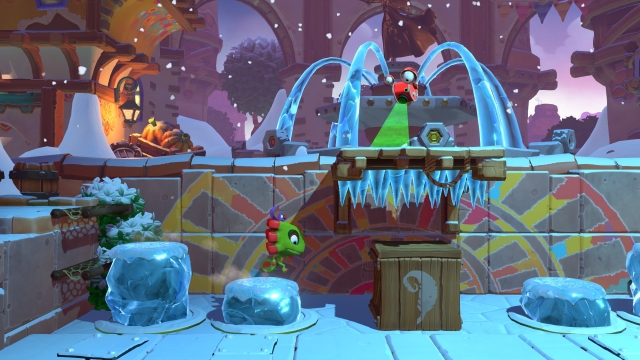 Yooka-Laylee and the Impossible Lair (Reviewed on Windows)

Playtonic has absolutely smashed it with Yooka-Laylee and the Impossible Lair. It builds on the team’s experience with platformers and manages to improve on its predecessor in every way. One of the best platformers I’ve played in years.

Yooka-Laylee and the Impossible Lair Review

Yooka-Laylee and the Impossible Lair Is Out Now

Yooka-Laylee and the Impossible Lair