Well, I’ll be honest, I didn’t know what to expect when I started up Zenith. The concept seemed pretty basic, an RPG structured world with upgradeable equipment and spells, an interesting and dynamic cast of characters such as mages, elves and emperors, and a story woven straight out of medieval fantasy adventure. However, Zenith is much more than just your run of the mill fantasy adventure.

Developed by Infinigon Games, Zenith is a humorous, charming ARPG that hits all the right notes and then some. Putting on a more comedic tone than other games in this genre, as well as being quite the refreshing departure from the J.R.R Tolkien-esque dark storytelling that we’ve all come to know. Storytelling that can be found in games such as Dragon Age, Hunted: The Demon’s Forge and The Elder Scrolls series.

Comparing Zenith in terms of story isn’t exactly fair when it comes to those bigger budget titles, though. No, Zenith is more closely linked to InXile Entertainment’s notable success The Bard’s Tale in that regard. With the meta humour, the mocking of cliches and the main character’s total departure from the rest of the cast, it really feels like Infinigon was paying homage in a way, or at the very least, giving a wink and a nudge. 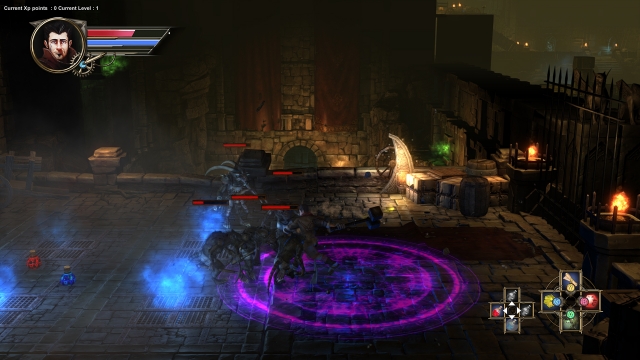 When discussing the actual plot, it’s fairly interesting. You, the player, take control of a mage named Argus and begin a journey that takes you from ‘good for nothing’ to ‘legend of the land’. To be fair, you kinda start off as an already well-known figure, but one thing leads to another and things happen. I’ll say this much with respect of actual plot details, Zenith has probably what is one of my favourite introductions to a game ever. To sum up and without wishing to spoil, at the start of the game you mock Disney’s Frozen, piss off an elf captain and avoid singing spiders all in the first five minutes. It was pure gold and had me anticipating what was to come.

Plot is a fickle thing however, and needs a well structured world and characters to carry it through. I mentioned earlier that the world was “RPG structured” and that definitely rings true. The set up is your average RPG affair. You have your classic ‘red potions heal, blue potions restore magic’ deal and the enemies are the same variation of soldiers, spiders and giant rats (except the rats talk and the spiders sing). Where this formula gets changed up is in that ever-present quirkiness that really brings the game into its own, taking an overall dreary setting and turning it into a delightfully colourful and light-hearted experience. Quirkiness that led such things as orc mafias, spaceships and elephant cannons to crop up.

As I’ve probably mentioned numerous times now, humour is the crutch that holds this game above others. The comedic timing is absolutely brilliant and all the characters had a distinct personality that prevented them from getting lost in the mix of an RPG. Speaking of characters, the developers must’ve had it out for Final Fantasy as there is a peculiar bunch of “emo” adventurers in-game going by names like Claude and Titus. All jokes aside though, I enjoyed all the characters that you interact with throughout the game’s entirety. Enough with story and characters, how does the game play? On the PS4, it runs quite smoothly and didn’t really present a lot of issues worth bringing up. The only thing I can think of is that Zenith can’t handle multiple enemies on screen very well, there’s a bit of screen tearing that occurs but again, nothing that’s a deal breaker. When describing the gameplay itself, it’s entertaining and oddly addicting for how simple it is. You have a projectile, a melee and an area of effect attack that are all varying degrees of useful. What makes the gameplay a bit bland is that enemies aren’t very difficult, so instead of going up against quality bosses and minions, you’ll be fending off the numbers game. This is a bit of a let down considering the amount of detail put into the other areas of this game.

All in all, Zenith is a comedic gem with addictive gameplay and an emphasis on storytelling only being hindered by its samey setting and somewhat samey gameplay style. I would definitely recommend picking this title to anyone if you they have the time and cash.

To sum up, Zenith is a game that everyone should give a go. It's charming, funny and just well made in general. Don't let the classic RPG setting fool you, Zenith is one for the books.