Zenzizenzic, as well as having a name that would leave even the most thorough of linguists stupefied, has a description as beguiling to the videogame journalist. The game informs the player that they are about to embark upon what it calls a “roguelike twin-stick bullet hell”. In many ways it fulfils that promise, with Dutch developer bitHuffel delivering a game that is at its core fun and frantic despite not really bringing anything new to the table.

Gamers familiar with the twin-stick genre will pick up this game and feel right at home. Those of you who (like me) are fresh to the concept will benefit from a short tutorial that takes you through the game’s core mechanics. You play a neat little box that floats surprisingly intuitively around a colourful 2D realm of equally colourful geometric backgrounds. The aim is, as with many bullet hell games, to survive and defeat as many enemies as possible with everything available to you. Though you start out meek, spluttering tiny projectiles towards your enemies, Zenzizenzic will provide you with a cavalcade of upgrades and toys to really start handing out the punishment. 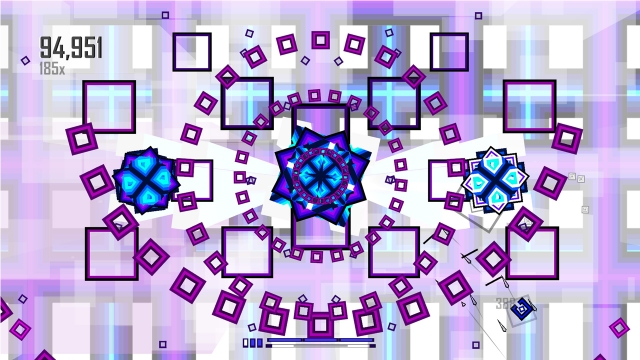 The game aims to differentiate itself from the pack by offering a more complex “macro mode” that offers players the ability to gain points and upgrade their avatar between stages, creating a firestorm of powers, abilities and shields that can mow down hundreds of smaller enemies. It’s in macro mode that you’ll run up against the game’s tougher bosses too, which can be exhilarating fights in their own right. Zenzizenzic supplies you with an array of super weapons with which to blast your way out of these tight spots, though, including huge laser cannons and volleys of enemy-seeking rockets. These weapons, which can be fired at the expense of your ship’s energy, are impressive to behold, but must be used with careful timing to give them maximum impact.

The game sets out to create a psychedelic feel and it succeeds well. Enemies are spinning geometric shapes imbued with pulsating colour and light, while projectiles surge around the screen satisfyingly. A pumping soundtrack accompanies the visuals, adding a layer of electronica-driven intensity to each level as the music adapts to how frantic your screen becomes. 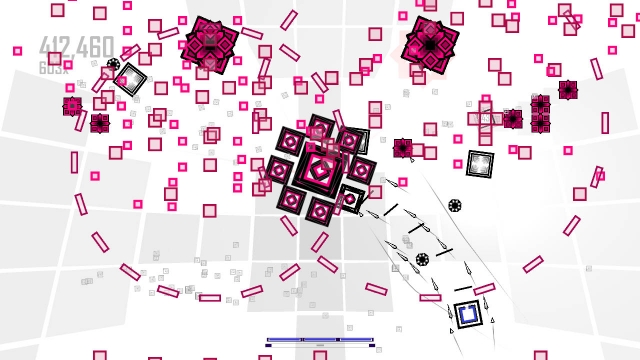 The minimalist style suits Zenzizenzic well, though it does feel like the developers chose their niche and decided not to budge from it - the game’s enemy design (especially the bosses) never quite reaches the grandiosity that a twin-stick bullet hell should aim to create to make the player feel small. Many of the boss fights (and some late game normal stages) can become confusing, with many spinning particles and objects on the screen at the same time. That said, what Zenzizenzic does get right it does well - the developers seem to know their genre and it ticks all the right boxes and makes all the right moves.

All in all, Zenzizenzic is a game that is fun in short bursts, and one that even I, someone who has never touched a bullet hell or even twin-stick title, can enjoy. The developers have created a game that can be played for a frantic five minutes or built upon in a surprisingly deep macro story. If you’re a fan of the psychedelic, or if you like your games throwing more shapes and enemies at you than you can shake a stick at, then Zenzizenzic is for you.

If you’re a fan of the psychedelic, or if you like your games throwing more shapes and enemies at you than you can shake a stick at, then Zenzizenzic is for you.