A crisp, monochromatic colour scheme with lowercase Arial adorns the home page of Really Bad Chess, Zac Gage's humorous take on one of the world's greatest strategy games. But don't be fooled; the simple aesthetics and familiar interface won't adequately prepare you for the mischievous rule-breaking that waits ahead.

It's fitting that the World Chess Championship has recently taken place. It serves as a nice point of reference to Really Bad Chess, which instantly reminded me of the hours I'd funnel away into conspiring against the Windows 95 Chess AI by creating 'custom' boards absolutely filled with queens, and then celebrate my unjust victory. This is mostly how Really Bad Chess earns its name. 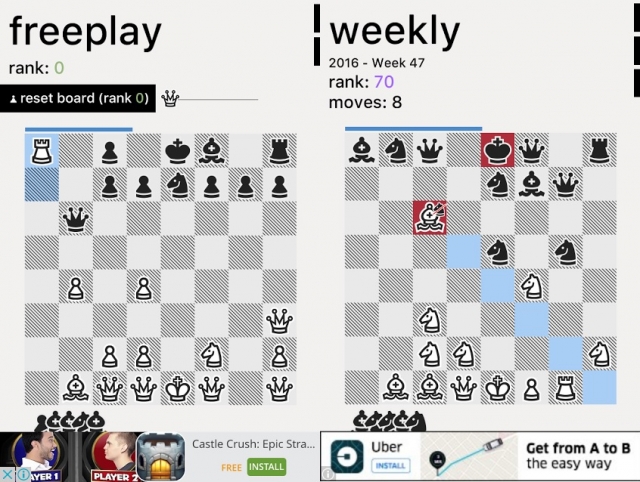 A selection of game types is immediately available ranging from the introductory freeplay, with an unlimited 'undo' function, to ranked mode, which becomes progressively harder as levels rise. In all games, players are allotted the usual 16 pieces, but some pieces are overrepresented. Sometimes, you're facing five bishops, and other times you're clobbering the AI with your rooks and cornering their king. In this way, it achieves balance (and fairness) through imbalance, and the incorrectness is all very amusing - at least at first.

A few disappointments do surface after a decent playthrough, such as the advertisements at the bottom of the screen. While they don't outright interrupt gameplay, their presence can partially block certain chess pieces. More troublesome than that is if you wish to play against a friend or family member, full features must be unlocked for $4.49. Since Chess is a standard two player game, it might enhance the social appeal if this feature was available right off the bat. Another issue that needs further refinement is the unnecessarily long AI reaction times. As a casual game, Really Bad Chess needs to keep players wholly engaged in the moment with quicker, more instantaneous action.

For the most part, Gage's reimagining of Chess is an absurd, refreshing delight. With its randomly designated pieces, each game is a truly unique, individual experience, but the bloated AI response times and the lack of a free 1v1 mode dampen the excitement value.

For the most part, Gage's reimagining of Chess is an absurd, refreshing delight. With its randomly designated pieces, each game is a truly unique, individual experience, but the bloated AI response times and the lack of a free 1v1 mode dampen the excitement value.

A keen retrogamer who grew up playing classics like Prince of Persia, Aladdin, and Diddy Kong Racing