Chaos On Deponia is a point and click adventure game, with a story that takes you on a wild adventure in the hopes of finding a girl Rufus likes. If you think this is a good plot point then we have different opinions, while the story may be fun, the whole premise of saving a damsel in distress is just so worn out and overplayed. Rufus has to travel to Elysium to go back to see his friends that he met on his last visit, who have been kidnapped, and must be saved. The story only took me about 10-15 hours to complete, the story was very entertaining although there were also some down points as well. The humour was very hit and miss, with some jokes making me smile while others made me cringe. The writing here was pretty good and well written overall, the story takes some turns that I really wasn't expecting. The art style in Chaos On Deponia looked nice, with some cartoon style graphics that fitted in well with the genre of the title, with some characters looking very whacky, it sets a good example of what the world looks like. While this game may not look impressive and realistic, like other games, it is good for families that want to sit down and enjoy a good story together. 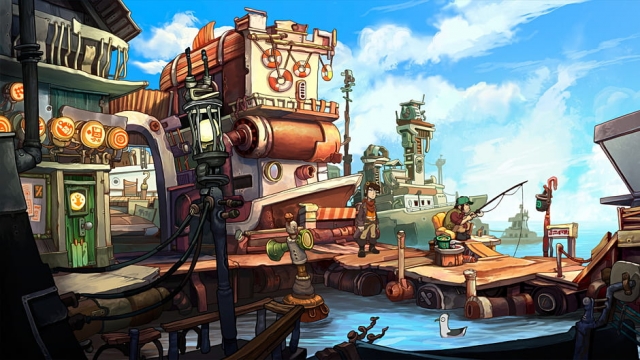 There really isn't many gameplay features that stand out from other games of the same genre. You use the left stick to aim at things and then you press the corresponding button to interact with whatever you are aiming at, this is how the game generally works. There are some puzzles littered throughout, I found that most of these were really easy, which disappointed me as these are what make games of this genre really stand out. Some of these puzzles will really feel familiar If you’ve played other games of this genre. puzzles are basically a combination of combining one item with another that triggers something to happen in the environment. This title does nothing to change the already established formula, if you have played games by Double Fine you will already know what to expect with this game.

This game is similar to games like Day Of The Tentacle or games from Telltale, except it lacks what those game series have. Chaos On Deponia doesn't have characters that immerse me into the world like the other games I mentioned, I think this is partly due to bad writing and partly due to this being a sequel and I haven't played the original. The game makes no attempt to explain what happened in the first game, which really doesn't help its case. While the environments are fun and nice to look around, there just wasn't enough here to make the game interesting. The characters lack the charm that the other games characters have, but overall if you enjoy the other games series you may enjoy this although you may want to play the original first.

Chaos on Deponia (Reviewed on PlayStation 4)

Chaos On Deponia is a fun game, albeit with its flaws. The story is fun and is a nice adventure for families to enjoy together. The writing here is okay and the puzzles are fun but way too easy, they lack the depth that other games from this genre have. Overall you may enjoy this story if you have children and they are looking for their first video game experience, otherwise I would avoid picking this game up if you are expecting a great adventure like the Double Fine games.