The Metal Gear Solid series has always divided opinion. In one corner there are the people who dislike the snaking story, long cut-scenes and "interesting" controls. The other comprises those who love the tense gameplay, unusual characterisation and cinematic direction. The latest chapter, Guns of the Patriots is unlikely to move anyone from either camp. Indeed, if you are a newcomer to the games then this title will be impenetrable. Metal Gear Solid 4 is a without question a story driven series. With 5 previous titles all creating an intricate tapestry of interweaving storylines a good knowledge of the games is essential. Even if you have played the previous games, refreshing your memory of events won't hurt as things do get complex.

The game takes place several years after those of Sons of Liberty. Solid Snake has aged prematurely as a side effect of his genetic cloning and is on a final off-the-books mission. He is sent to assassinate his nemesis Liquid Ocelot (Revolver Ocelot affected by the transplanted arm of Liquid Snake) before he can undertake an insurrection. The story is a complex twisting narrative which succeeds in tying up the loose ends of the series.

The characters are a refreshing change from normal two-dimensional game fare. The game never misses an opportunity to spend extra time adding extra back story or small subtle indicators that really boost people's personalities. Whether this is Snake's world weary persona, Otacon's emotional support or the complex psyche of your nemesis. 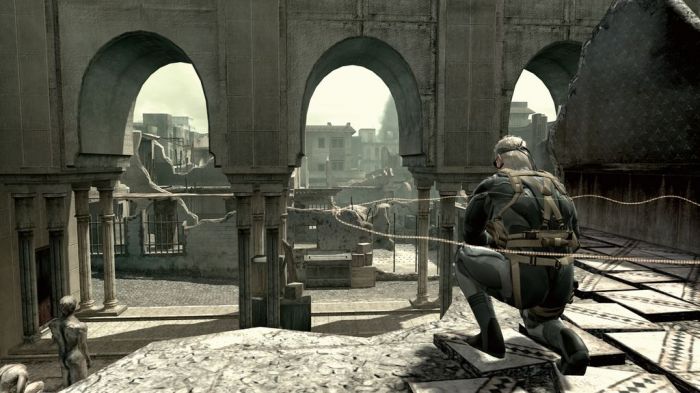 The story is presented in the series' traditional method, through cut-scenes and the use of the codec. Whilst the codec has taken a much reduced role in comparison to previous titles it is still present and plays an important part in gathering advice and advancing the plot. However a significant portion of the game is presented in cinematic form. This is generally well directed and entertaining but at times you yearn for some more gameplay.

Metal Gear Solid 4 is occasionally frustrating. There are times when the briefings and cut scenes go on longer than necessary when you just want more actual game. Occasionally the controls are awkward and fiddly leading to some truly finger breaking moments. Sometimes the story can confuse and bewilder, but that's partially the point.

However, despite its' flaws, Guns of the Patriots is never less than gripping. It has been some time since a title kept me playing long into the night. There is so much that the game does right. Metal Gear Solid always had the sub-title "Tactical Espionage Action" and this has never been truer. Now the title really acknowledges the ways to play it. 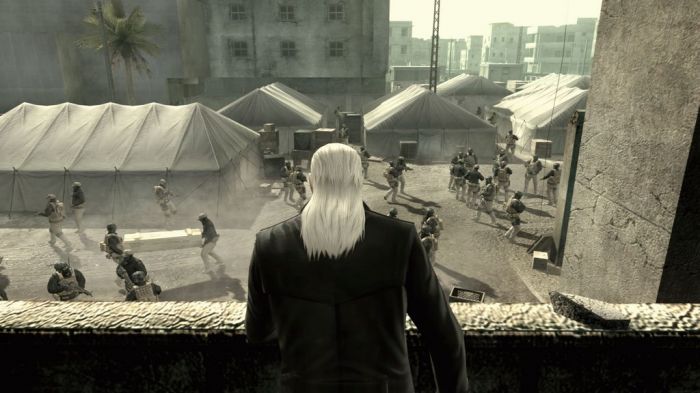 There are numerous new innovations to the gameplay. The stealth camouflage elements from the third title return with a refreshingly modern twist. The stamina gauge is replaced with a psyche bar reflecting Snake's psychological condition. Snake is now accompanied by a small robot companion he can use for recognisance. The new changes feel natural and fit exactly into the style of the series.

There are now two distinct ways of playing with a nice middle ground for those that utilise elements of both. On the one hand there is the stealthy silent approach which yields some of the tensest moments in any game. As you carefully crawl through a war torn country inches away from a mercenary you really feel yourself starting to sweat. It is possible to play through the game without killing a single person; this is what espionage is surely about.

Yet, the game now favours a more action orientated approach. You can now purchase weapons and items from a morally ambiguous seller, which gives you access to a range of firepower. These range from sniper rifles to machine guns and make it possible to shoot your way out of most situations. These prove invaluable if you assist in the faction war side of the game where you can gain some support against opponents through good deeds. This is a tad underdeveloped but is a good background element. The game also takes place in a number of different locations divided into different acts in a departure for the series. This works well and the variety is refreshing and helps to keep the game different and entertaining. Metal Gear Solid 4 maintains the excellent bosses the series has become renowned for. The new enemies aren't quite up to the standard of the previous titles, though they are all suitably different. Each confrontation is challenging and incredibly cinematic including some nice throwbacks to the previous games.

The replayability of the game is also excellent. There are a wide variety of bonus items, Easter Eggs and unlockable weapons but the real appeal lies in Metal Gear Online. Effectively an online title with a variety of game modes, this is an ambitious and different console multiplayer title. In the most popular mode, you join a team after creating a character and choosing their specialisations. This is a refreshing mode which translates the core gameplay well. Most importantly it is enjoyable and satisfying. The game is unashamedly cinematic and the graphics and sound reflect this. With some of the best visuals I have seen in a game, there are times when cut-scenes and gameplay merge seemlessly. The score is again outstanding with some impressively emotional tracks from composer Harry Gregson-Williams. This is an incredibly accomplished technical achievement and really shows what the Playstation 3 is capable of.

Metal Gear Solid 4 is a fitting end to the series which carefully ties the existing installments together nicely. The gameplay is slick, polished and fulfilling, even though there isn't quite enough. If you are a fan of the series this is frankly unmissable. For everyone else, Metal Gear Solid is worth playing for the refined gameplay both online and in single player. Whilst the story may be complex, this is a series which has helped to shape gaming and is well worth taking the time to experience, even if that means from the beginning.

Metal Gear Solid 4: Guns of the Patriots (Reviewed on PlayStation 3)

The Metal Gear Solid series has always divided opinion. In one corner there are the people who dislike the snaking story, long cut-scenes and &quot;interesting&quot; controls. The other comprises those who love the tense gameplay, unusual characterisation and cinematic direction. The latest chapter, Guns of the Patriots is unlikely to move anyone from either camp.