“Snooker is boring” I hear you whisper, “it’s just men hitting balls with sticks”. Alright, calm down. I mean, football can be pretty damn boring too, and I say that as a Manchester United fan. Or, maybe that’s why it has been boring recently…

Regardless, Snooker 19 isn’t going to appeal to everyone. If you don’t like snooker, it doesn’t take a genius to suggest that if this is popping up in your recommendations list, something has gone awry. It features the full host of 128 players from the World Snooker Tour, as well as all the venues from the 26 tournaments spread across a season. 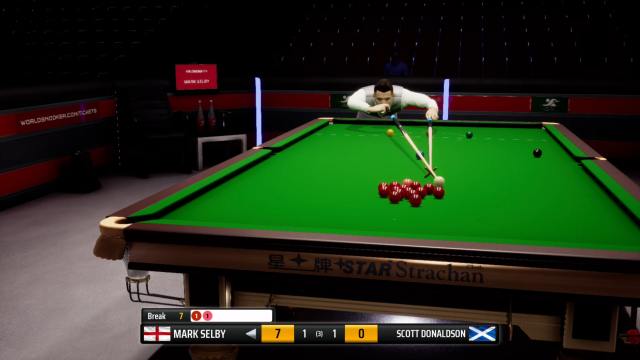 It’s very easy to pre-judge this game based on screenshots. As I entered my first match, I mentally prepared myself for the worst. After all, for those of us who do enjoy snooker, we aren’t exactly blessed with a large choice of games. I’m a rugby league fan too, and it’s even more frustrating that there’s absolutely nothing decent in that area either.

If I said “the graphics aren’t the best”, it would be a massive understatement. I wonder if it could run on a PlayStation 2. But, you know what, none of that really matters, it’s the gameplay in something like snooker. And for the most part, it’s actually really good. 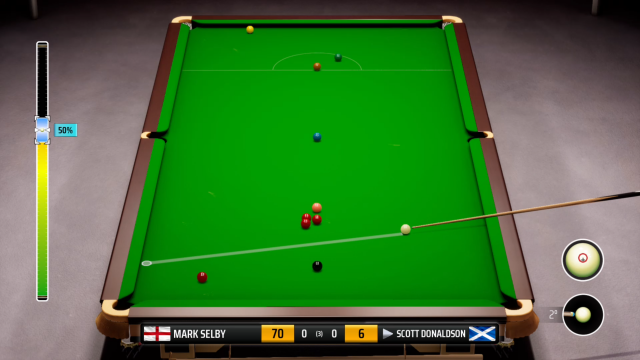 The ball physics I have found to be quite accurate. Applying spin (usually) does what I want, angles are realistic, and the pockets are as tight as a duck’s arse. The only slight criticism I have here is sometimes it feels as though the balls roll a little too far, but once you account it into your shot power, it becomes easy to manage.

Elsewhere, the controls are a little fiddly until you get the hang of them. You’re given the traditional top down view, where your shot assist difficulty level will determine how easy it is to line up your shots. The higher you go (there are three levels), the more the object ball’s line will “splay” out rather than just being a straight line, where on the lowest level it will pretty much tell you where it’s going to go.

Again, once you get the hang of it you can keep yourself in the designated area fairly easily. I did keep on pulling the right analogue stick back when I wasn’t ready to take the shot, which adjusts your cue power. It’s frustrating when you’ve got spin applied, because if you don’t get the power exactly where it was before, the path of the cue ball will be different. I mentioned earlier about all the Tour players being included in this game, likenesses and all. In truth, who you’re playing makes absolutely no difference, because every player plays exactly the same way. Mark Selby doesn’t grind you down when you’re in front; Mark Williams doesn’t show off with his underarm shots; and O’Sullivan doesn’t get visibly pissed off when a few balls don’t go in.

However, on the whole, the AI is OK, but when you first get into the game it’s bloody difficult. I had to knock it down to the easiest level, and I’ve yet to lose a match, but there’s still a few frames where it has only taken two breaks to clear the table. I notched it back up again, and you really get punished for every mistake. But, snooker in real life is hard. If you’ve never played on a full length table before, you’ll have a new appreciation of just how difficult it is to be a good player. 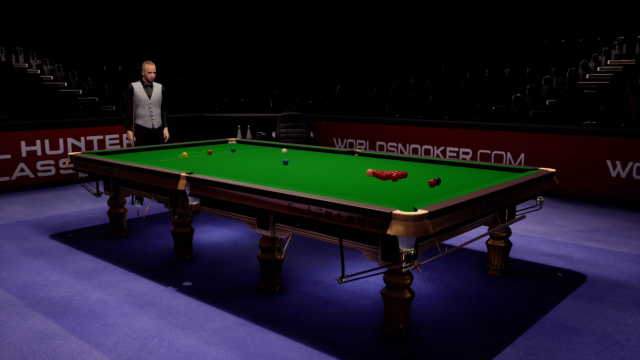 The career mode is where I imagine most will spend their time. Elsewhere, there’s of course online and local multiplayer and free play modes. It’s weird that you can’t create your own player, or properly skip through the AI’s shots, and the player animations are quite awful.

But even after that is said and done, the core of the game is really good. It’s the best snooker game you can get right now, which I know isn’t saying a lot given the desolate landscape of entries with this sport. If you’re on the fence, I would suggest waiting for a sale as I think the asking price of £29.99 is a little high, however if you’re a die-hard snooker fan I can’t do much else other than recommend Snooker 19.

Now I’m off, I’m up against Ding Junhui at the Barbican.

Snooker 19 (Reviewed on Xbox One)

There’s a really good core game here, but it’s let down by the overall presentation. If you enjoy snooker though, you can easily look past this to enjoy it for what it is.