Some of the biggest RPG videogames have sprung from tabletop games. Such big-hitters as Dungeons & Dragons, Vampire: The Masquerade and Shadowrun have all seen digital implementations, but until now, there hasn’t been a proper game for the Cyberpunk series. Sure, there was a dodgy platform game for Java mobile phones in the early 2000s, but that’s hardly a fitting tribute to one of the most popular names in pen-and-paper role-playing. Step forward the team at CD Projekt Red (CDPR), possibly one of the few developers able to do justice to the series.

We’ve been drip-fed little bits of information about Cyberpunk 2077 over the last couple of years since it was announced, with the Polish giant choosing the moment carefully with regards to revelations. This year’s gamescom brought us the motherlode, with nearly an hour’s worth of gameplay, showing the in-development title in all its pre-release glory. 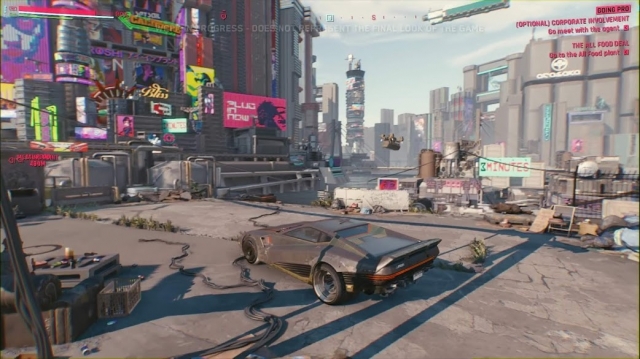 The astounding thing about the footage is just how polished it is. CDPR was at pains to make sure that we all knew this was a piece of pre-release footage and not representative of the final game. They even went so far as to pop in a single frame explaining in detail why they didn’t want to show the footage to the public until gamescom. In short, they want everything to be perfect and they don’t want their work in progress to be confused with the final game in case they make changes. Nonetheless, the footage that we saw looked stunning. Environments are dynamic and destructible, animation is smooth and realistic, and the water droplets clinging to the breasts of the naked lady that we see within the first few minutes are super-lifelike.

It’s that last part that reminded me, if any reminder were needed, that this is a CDPR game. After The Witcher series, we shouldn’t be surprised, but every trope to remind you this is a “game aimed at adults” is present. Vast quantities of profanity, including an obligatory c-bomb? Check. Unnecessarily naked female early on and a gratuitous butt shot of an undressed male a bit later? You betcha! How about a nice smattering of caricatured racial stereotypes? Well, of course. But what about extreme violence and slow-mo bullet time? It’s all here! Of course, these could also be seen as part of the tropes of cyberpunk as a genre, so it could be a little unfair to criticise the game over it. The line “I’m cleaner than a c*** at a convent” is one of the most cringeworthy things I’ve heard in a videogame since Resident Evil’s infamous “Jill sandwich”, I hope it doesn’t make the final cut.

Some of the tropes that weren’t represented stood out though. We were all expecting a neon-lit city in the dark with reflections coming from puddles. Actually, we got a trailer set during the daytime, with the neon lights competing with the sun and the hustle of bustle of an affluent city seeming at odds with the seedy dark underworld that permeates it. It’s quite a striking look that stays true to its source material without being too much of a cliché. The complexity within the game looks exceptional. There are no fixed classes, instead, you adapt your character as you go, augmenting with various cybernetic enhancements and learning new skills throughout. If you want to change your route though, then you can do so throughout, making it much more fluid than your average RPG. The decisions that you make throughout seem to have a genuine impact on the world around you as well. How NPCs react to you, the options that you have for making friends and foes, even the places you can go and the quests you can obtain, all of them are dynamic.

How you choose to approach every situation is left up to you, although the game does appear to reward caution and cunning more than brute force. If you want to put all of your points into strength and go in all guns blazing to every encounter then you can do that, but you’ll miss out on the subtle intricacies of Cyberpunk 2077’s conversation system. 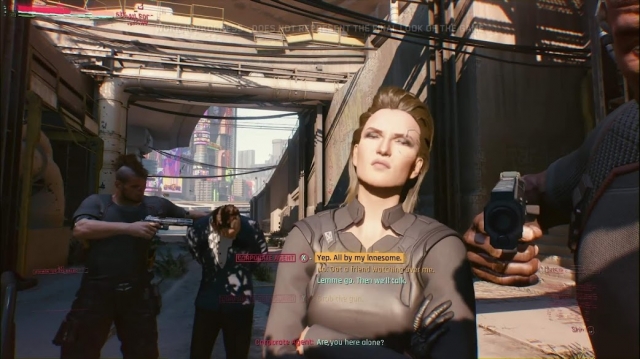 There have been a few raised eyebrows about the game’s insistence on a first-person viewpoint, with CDPR stating that this is to make the game more immersive. A choice to see things in third person too might have been nice, but honestly, I quite like the chosen perspective. It makes the game feel a little more like a shooter, but with the intricate character system, as well as the vast quantity of side quests and exploration options, it’s still very clearly an RPG, so nothing to worry about there.

There are some insane weapons to play with as well. Bullets that go through walls, high-tech optic implants that let you zoom in and pick out weak points, and neural hacking to disable your enemies. It’s a very slick looking system which gives a huge amount of choice.

We still don’t have a release date, but it’s likely in the first half of 2019, as CDPR has promised investors as such. The game may need a lot of work done to it in the eyes of its creator, but I’m stoked for it already. If this is how good it looks before its finished, this could be pretty hot property once it’s finally with us. 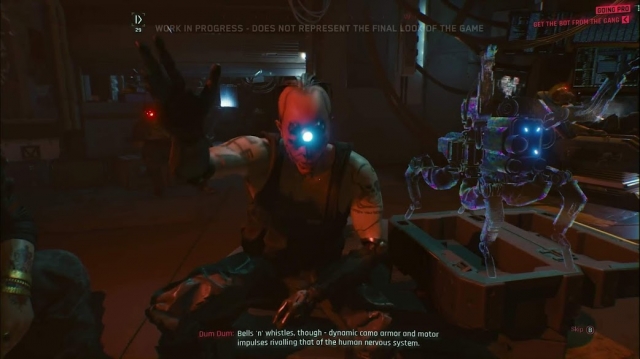