Welcome to another issue of GameGrin’s Outfit of the Month series (or “OOTM” for short!); wherein we monitor all the game releases within the month of February, and collectively rank each noteworthy fashion-choice to establish who is the best-dressed of them all!

As always, we would love your input on our ratings and any suggestions for other articles we could collaborate on in the future, so let us know your thoughts in the comments below. Without further ado, let’s talk game fashion.

26th of February on Nintendo Switch Adelle Ein is a mercenary for hire. You might be thinking that she doesn’t look particularly heavily armored and you’d be correct. However her clothing is clearly made with freedom of movement in mind.

It gives off very piratey vibes and conjures up excellent phrases like “rapscallion” and “scoundrel”; the sort of labels that one dreams of as a young woman. Her billowing off-white trousers (which could be made from old ship’s sails) are tapered in at the knee with the use of some tied brown twine, leaving enough space to show off the royal blue foot wraps that snake up her calves. The wraps are nestled under a practical brown sandal with some added flair in the form of silver buckles and a large fanned tongue.

The cut-out detailing at the top of her trousers is a unique touch which adds to the apparent cheekiness of the character, whilst likely leaving some questionable tan lines.

The cut-out detailing is carried on through to her blue crop top, which has a clear cold-shoulder feature, and a delicate beaded trim that adorns the edge and sleeves. The hue really brings out the sparkling blue colour of her eyes and is further mirrored in the extravagant and almost ostentatious sheath in which she carries her sword. The neckline is covered by an oversized white scarf kept in place by a subtle horseshoe pin. It looks like it would provide much-needed warmth on a cold night and protection from the sun during the day.

The whole outfit is topped by a ridiculously oversized brown belt which houses all manner of weapons and potions, and looks truly ill-fitted and uncomfortable, but fashion is pain darling. Despite the few clear impractical features, the whole get-up oozes charm and badassery, and honestly, I love it. - Emsey

19th of February on Nintendo Switch Measuring in at 240 meters in length and with a top speed of 30 knots, HMS Ark Royal was an aircraft carrier launched in 1937. Capable of carrying upwards of 50 aircraft into battle and equipped with eight twin 4.5-inch dual-purpose guns and 4.5-inch belt armour, Ark Royal was a capable ship. Now, while her real-life counterpart might have opted for a standard military shade of grey, her look for Azur Lane: Crosswave is much more fashionable.

Keeping to the navy theme of Azur Lane, Ark Royal has a look that is inspired by a typical navy officer uniform and with elements of steampunk mixed in for some added flare. The outfits main item is that of a navy-blue military-style jacket which extends down to her ankles. With a red corset-like element included, the jacket is given an extra bit of class thanks to the gold trim and detailing throughout.

Ark Royal opts for an open chest to bring an element of sexiness to the look, which she backs up by wearing a black pencil skirt complete with stockings and heels. While they might not be the most appropriate for warfare on the open sea, that will not stop her from bringing some class and charm to the battle. Do not be mistaken however, as Ark Royal has the weaponry to back up her bold look and with its steampunk designs, it helps to elevate the outfit to a new level. - Judgemental Waifu

2nd of February on PlayStation 5 If one were to get into vehicular combat, I'd seek the one who is dressed for the job. Escaping the esports-esque veneer that’s plastered on the majority of “AllStars”, Muna provides not only visual respite from the drab, but distinctive character.

Being heavily adorned in details from head to toe, one stand-out accessory we would be remiss to mention has to be the geometric shash and electrifying goggles (I suspect that the hints of blue found in both pieces are potentially a wink to her Somali heritage). - Danielle

11th of February on Microsoft Windows and macOS Players familiar with the massively successful game League of Legends could always be divided by those who came for the champion skins and stayed for the gameplay or vice versa. League of Legends or “LoL” has become known for its eye catching and thematic skins for their characters and for excellent reasons. They release new skins for every holiday and we’re getting into the Valentine's Day reveal!

Now usually, LoL releases a couple of skins for each event or holiday, but we're going to focus on the best one to come out of this Valentine’s Day batch. Lucky for us, it's a couple set with our very own dark mage Syndra paired with the cunning assassin Talon! League of Legends plays off of both characters' shadow-like theme. Centering the colour coordination around purple, an unlikely valentine's colour, I love it! As usual, the female character outshines the male character, but at least Talon’s weapon looks stunning in this skin.

For Syndra, they kept her corset style with a cinched dress and double the frills, and let's not look over that sexy black lace on her top half and over her eyes! So dramatic and perfect for Syndra! Purple and white roses replace her dark purple magic orbs and ornate her crown, which is a nice touch. I see why they didn't make most of the flowers one colour; however, I don't think I would mind the flower orbs being the same colour as her crown flowers. I'm a sucker for consistency.

For Talon, I honestly couldn’t care less for the open dress coat; the colour palette seems too gaudy. His hair, which is usually hidden by a hood, and his beautiful rose ordained weapon, are the highlights of his skin, and I'm actually happy with that. Usually, LoL puts the guy characters in colourised suits for Valentine's Day and calls it a day.

Both characters got a hair makeover, but I wish Syndra's will stay and be incorporated into her base skin! The loose curls in her hair compliment the frills of her dress really well, helping to bring it all together. - Aulea

16th of February on Nintendo Switch and PlayStation 4 It isn’t easy being an Exemplar, a magical weapon that can turn into a human being. This is especially the case when one is engaged in countless battles and working towards political takeover. But that doesn’t mean these weapons-turned-heroes can’t look fantastic while doing so.

Valeria in particular stands out from the crowd by bringing her passion for mechanics and steampunk forward. The genius inventor’s armour is a shocking gold, covered in vents and bolts, held together by leather belts that keep the set firmly meshed together like clockwork.

The armour’s metallic sheen is further matched by Valeria’s shimmering Victorian knee-high boots, her elbow-guards, and the gold at the top of her stylish, feather-adorned bicorne. To add to that, each of these gleaming golden pieces of steampunk armour plays off of the black cloth underneath, whether that comes from her thigh-high socks, her accentuated cuffs, the gorgeous bicorne itself, or the layered circle skirt. Highlighting the feather in her cap, Valeria completes her Victorian ensemble with a pleated collar that further accentuates the layers of the skirt beneath it.

Not a single portion of this smart outfit feels out of place, displaying Valeria’s desire for perfection. Even her mechanical bow adds to the black and gold colour scheme, not to mention how its steering wheel belies a light nautical theme that reminds us of the bicorne’s history in naval affairs, such as with one of its most famous adorners: Napoléon Bonaparte. Wearing a hat with as storied a history as that, there’s little doubt Valeria will be a great help in toppling a regime. - Erin

And from that, we’ve found our best-dressed from the videogames that have released content within the month of February of 2021: Syndra & Talon’s Withered Rose outfit from League of Legends! - both of which look as deadly as they are gorgeous. 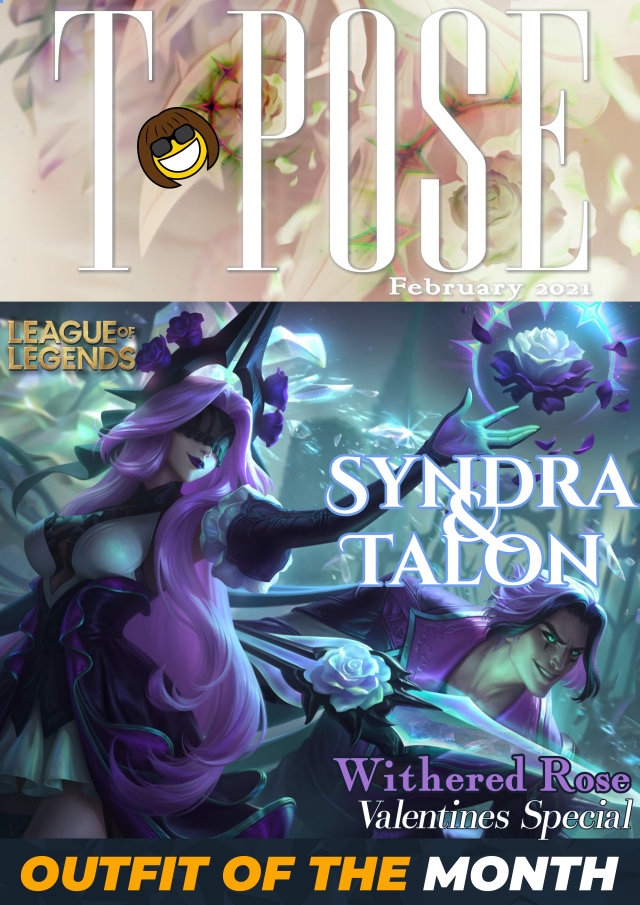 Thought there were any great looks we missed, or perhaps have any ideas of who to cover in next month's issue? Leave any and all hot takes in the comments section below!

Prev
T-Pose: Outfit of the Month
Next

Read the full “T-Pose: Outfit of the Month” series
First
Prev
Next